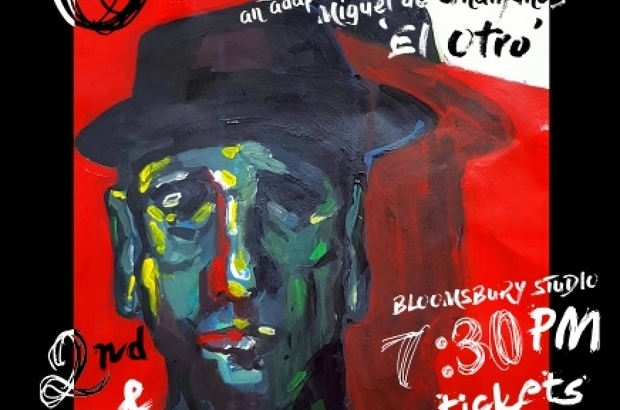 Twin brothers. One killed, the other his killer. But who is who?

When Ernesto returns to the house of his sister, Laura, from America, he is confronted with a brother-in-law who has descended into madness, obsessed by the idea that ‘to look at one’s own image is to die’. He has smashed all of the mirrors in the house and refers to himself only as ‘The Other’. What has caused this is unknown to both Ernesto and the audience, and thus we embark on a disturbing quest to understand the cause of Cosme’s condition.

Adapted in this production from the original Spanish into English, Miguel de Unamuno’s 1926 play – directed by Jacob Brook – explores the question of identity. A lack of sense of self the play suggests can lead to insanity, and at worst, death. Yet herein lies the fundamental problem with this production: the text, punctuated with repetitions and incoherent lines, lacks a necessary fluency. An exploration of the haunting madness of The Other, his absence of identity, and his pursuit to be ‘unique’ was ultimately left under-cooked, with the play seemingly muddled as if it had lost its own identity as well. At times it felt as if the actors and staging held back by the script, and one can only imagine how much more powerful the play would have been with some more intense emotional language and meaningful dialogue. The minimalist set did go some way to correct this, the lack of walls and only few props displaying a physical representation of the deficiency of identity, while the cracked mirrors also gave the production an eerie, unsettling feeling, which added to the mystery-play mood.

Pablo Temboury was convincing as a retracted, impassive Damian – or Cosme — seemingly lost in his own confusion, and visibly estranged from reality. Don Juan, the family doctor played by Miles Blanch, was a reassuring presence whenever on stage, helping the narrative move along with real ease, while the female leads added a spark of passion that was lacking in some parts of the play. Monika Klara Herman as Damiana, and Freya James as Laura, though polar in their characterisation, both depicted their characters’ emotional traumas in powerful ways. Though often the sole focus of many scenes, they were in some places prevented from unearthing the full psychological depth and nuance of the characters by logistics of the script.

The title itself suggests a lack of clarity, and in this case it carried through to the play itself. Visually, the play was a success, owing to its careful staging and subtle direction that exposed the genuine psychological struggle behind the action. The final production, however, though full of great ideas, felt almost passive at times, and the conceptual heart of the play seemed somewhat unfulfilled.

Illustration on featured image by Alexandra Mitrutoiu, and design by EJ Oakley.