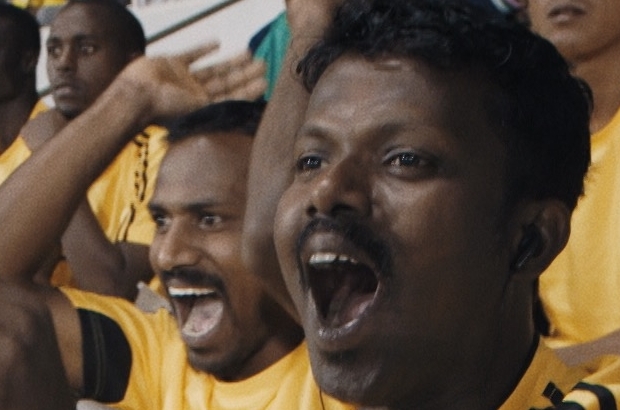 The Workers Cup is a heart-warming portrait of the resilient souls who work all day to construct the stadiums for Qatar 2022, then stay up late into the night, training and playing football. Funny and deeply honest, these young men are eager to be seen and understood in a place that robs them of their individuality. They acknowledge that the ‘Workers Cup’, organised by the Qatar Stars League, was never about the workers themselves, but good publicity for the recruitment agencies they work for, who depend on a stream of migrants coming from all over Asia, Africa and other parts of the Middle East for profit. Yet they see the chance to assert their identity as footballers in their own right, and grab it brilliantly.

Adam Sobel’s film deftly communicates the level of human rights abuse there is surrounding the construction of the stadiums for Qatar 2022, whilst providing comic relief and reflecting the strength of the construction workers. From learning that Kenneth, the team captain of the GCC (Gulf Construction Company) football team, was lied to by his agent, there’s a shift to a shot of his team in a minivan jubilantly singing and dancing. The whole cinema was alive with laughter, especially in the first half of the movie, with one football player forgetting his boots, wearing flip-flops with socks to play the match instead, and lots of talk surrounding women and dating. Paul reminisces about nights out in Kenya, his home country, ‘seducing’ women whilst another worker and his friend laugh at the idea of taking a day off to go on a date — it’s so preposterous that it’s humorous in the context of Qatar’s conservative society.

But behind the light-hearted conversations lie realities that are much more difficult to communicate. In such a demanding workplace — one worker reveals that the sense of community and brotherly bonding we see on screen is not representative — a worker can go days without speaking to anybody. Sobel reminds us that the football team are not representative of the rest of the workers. Whilst the team have matches and training together to look forward to, the other workers have lived the same identical day every day for months or years. They work all day, every day, underpaid and disrespected, living in cramped rooms with no real freedom. These men make the most of what they have but they deserve much better, and they seem to know this. In one scene in the cafeteria the men discuss their situation in relation to the idea of human rights and freedom, and the term ‘slavery’ comes up frequently.

Escaping the cycle and returning home is not an option for many. We are shown a man resting in a room reserved for injured workers. Concerned when we see his leg wrapped in a bandage, there is a sense of horror when we find out that this is not due to a work-related injury but an attack by his roommate who he says was a good guy. Defending his assailant, he explains that his roommate was desperate to go home, deciding to stab him in the leg with a knife so he wouldn’t have to work at the company any longer. His attempt was successful – after handing himself in to the management he was taken to the police station and then deported. What is hard to swallow is not just this man’s ability to justify attacking his roommate to get home, but also his roommate’s sympathetic portrayal of his attacker.

As The Workers Cup comes to a close, there is anger and disappointment, but also a sense of achievement and hope. Umesh, who organised the team, expresses that he thought the games would go further, that the workers would be given a place in Qatar 2022, but that now he sees it as a ‘mockery’ — a publicity stunt and no more. However, Samuel, who was a professional goalkeeper in Ghana, gets an award for best goalkeeper, and Paul, speaking over the awards ceremony, acknowledges that though the cup is really about tenders and constructing stadiums, it does provide a chance to be considered a footballer, leaving us to decide whether that goal was fulfilled.