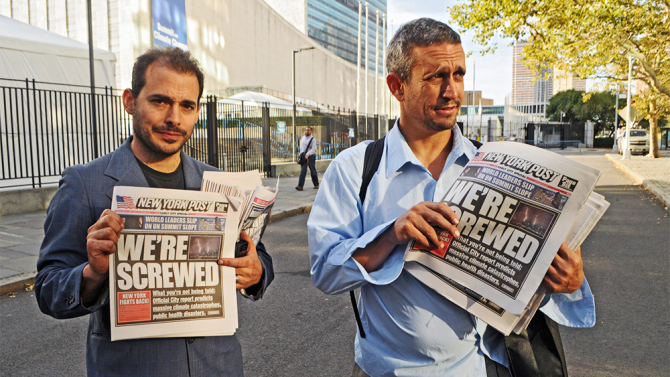 Courtesy of the Human Rights Watch Film Festival, MAY ZIADÉ takes a look at a ‘genuine devotion to reformative social activism’ in The Yes Men are Revolting.

For a Human Rights Watch Film Festival entry to begin with Whitney Houston’s I Will Survive blasting accompanied by the sight of New Yorkers in inflatable suits is starting. Yet straight from the opening scene the Yes Men’s prerogative is set; the most serious issues can be tackled in the most colourful ways.

The Yes Men are an American duo, Mike and Andy, who have dedicated a big part of their lives to staging political scandals through smart, boisterous, staged ‘hoaxes’ where they often dress up and act as high officials to denounce institutionalized treachery. They have had successful practical impacts and raised attention to WTO carelessness, lack of governmental transparency, and demagogy to name but a few. Their subversive methods have already piqued a panoply of directors’ interest, The Yes Men Are Revolting being the third account of their endeavours. Directed by Laura Nix and the men themselves, this outing focuses on the soaring issue of Climate change and gives us a personal look at their lives.

We travel with Andy and Mike through Uganda, Amsterdam, Canada, Seattle and New York as they introduce us to and inform us on the different stakes, stakeholders and victims of Climate change. The people they surround themselves with are smart and funny, particularly a native American activist, Gitz Crazyboy, who answers Andy’s naive ‘So all of this was indigenous land?’ while pointing at an industrial oil field landscape in Canada. ‘Yes,’ he replies ‘All of North America was.’ As the hoaxes build up, The Yes Men becomes a movement that surpasses the two efforts; a whole army of Yes Men and Women is cooking.

As we delve into the intricacies of fighting Climate change, The Yes Men Are Revolting also gives us an exclusive chance to explore the personal lives of Mike and Andy. Unfortunately, this is where the film disappoints. Andy and Mike are explicitly type-cast in the film as the ‘family guy’ and the ‘wild card’. A lot of their emotional scenes seem staged, or at least re-enacted, especially those where the two men engage in frivolous arguments. Anything that revolves around their personal lives somehow seems manipulative: there is a point where Mike makes a far-fetched comparison between good parenting and good activism. The traces of signposting and simplification damage the informative content of the documentary and, more disturbingly, the veracity of their cause.

Ironically it is with this same suspicion that the Yes Men encourage us to look at the people who keep us informed. Regardless of all the discordant factors, it would be implausible to deny the Yes Men’s genuine devotion to reformative social activism. Self-awareness is definitely shown on their part: ‘We’re hypocrites,’ they both agree whilst tipsily realizing that, despite their militancy, they still take part in hyper-consumerist lifestyles. And the slow, melodramatic third quarter of the film is quickly washed out by the fabulously hilarious final stunt.

When describing their relationship, Andy explains that he and Mike are each other’s ‘enablers’. In the same way, the film itself enables the audience to partake in Yes Men activities, to inspire a new generation of social activists. Mike’s family commitments are keeping him away from the field and Andy needs to settle down, it seems like time has come for both of them to pass the torch. The Yes Men are recruiting and they’ve got me on board.

If you would like to check out more regarding the Human Rights Watch Film Festival and to see what’s going on, click here.