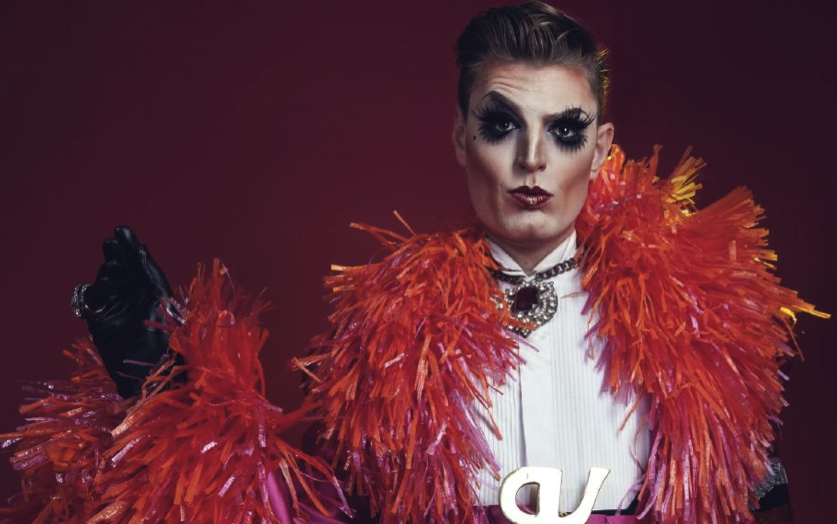 Torres introduces himself as an immigrant from El Salvador, now living in a vegan queer collective in Brooklyn, New York. Later on, having revealed more about himself through the ‘shapes’ arranged on the desk in front of him – he quips, ‘Yes. I am always doing exactly what a Trump supporter thinks I’m doing. It’s fantastic.’ He is softly spoken, deadpan in approach and gently teases laughter from his audience, rather than demanding it. He blends the perfect cocktail of subtlety and absurdity, and the audience are utterly charmed.

The concept of the show is simple: he sits in front of his desk, with his iPhone camera rigged up next to him filming his hands, which are projected onto a screen for the audience’s scrutiny. He places his favourite shapes under the camera for the audience, and explains, one by one, what they mean to him. The format is undeniably repetitive, but his imagination is vast enough and his wit sharp enough to carry it – glitter-handed – for the 45 minute set.

His eclectic selection of shapes includes: a Ferrero Rocher, clay animal prototypes he invented for the zoo to make it more interesting (including a swan with a neck so long it drags behind her, because – pain is beauty), the set for a flea soap opera of his own devising, and a purple diamond representative of Daisy Duck’s eyeshadow – which Julio always noticed as a child, but Donald never did – and this broke his heart. He goes on in this manner, gently both enforcing and mocking gendered stereotypes, by applying them to even the most meaningless shapes. For his straight friend’s birthday he got him ‘an empty gatorade bottle’. A seemingly useless blingy piece of silver with a fat pink crystal on the end is introduced as ‘Jessica, who ‘always begins and ends her emails with ASAP – I mean, have you ever seen more of a Jessica?’ His mind is a confusing and brilliant place to be party to, and this pseudo-sentimental display of his identity – for that is what the show is – is a tremendous success.

Among the posters and flyers lining the streets of Edinburgh, Anya Anastasia’s sticks out: a feminist femme fatale at the centre of a cabaret. Cabaret as a genre provides the perfect platform for a woman to take control of the male gaze and direct it exactly as she wishes – Rogue Romantic is a perfect example of how this is done.

When the audience enter the venue it is set up as one would expect a cabaret venue – tables and chairs lit by candles towards the front, and a bar open for the duration so people can wander around freely. Before the show officially begins, Anya Anastasia lies drooped over the grand piano and the women who form her band wander around sweeping to set the mood. The show opens with a song lamenting loves lost and hopes that got ruined ‘when they went through the wash’. Anya’s vocals are exquisite and the show begins with intriguing modern flair and a real air of class.

She then begins to pick on audience members – declaring in song and dance that she is in love with each one before casting them off callously and moving onto the next. Not just men, women too – this is a progressive show, after all. The whole thing is very good fun, the audience barely notices its scantiness we are so enrapt, and so involved. She decries negativity towards promiscuity; mocks misogynistic tropes in Hollywood films (seeing a future where she meets her perfect man: ‘He’ll have a layered and complex personality and a great career, and pack it all in because – love’) – and declares before her final number there will be ‘no more self-sacrifice for love’. Thus far, though there have been titters, the show has not been overly funny. However, she winds up with a cracking song celebrating sexual self-sufficiency (‘Do You Like Doing It On Your Own?’), sticking two fingers up to the inadequate men of her past. It’s a classy and clever affair under cover of a sordid set-up. Anya Anastasia is glowing with self-assurance and is engaging beginning to end – almost as if the empowerment that comes with performing femininity in drag artists has taken hold of her, for that is what she is really doing; playing she-god, the woman in control.

Reuben Kaye leads his own cabaret, in the same venue, directly following Anya Anastasia. For this show, however, the venue is packed to the rafters (300 people strong), and begins and ends late as the crowd are hungry for every minute they can squeeze out of him. He is quite possibly the most captivating act of the Fringe. He begins his show by stating ‘This show is designed to let you know there is light’ – and that there is. He shows us his story, in a long, camp extravaganza – of how makeup grew to empower him, an Australian ‘poofter’ at the mercy of bullies, age 14.

From beginning to end, he – like Anya Anastasia – asserts his power over the crowd, makes himself the conductor of the room. A man stands up to go to the toilet mid-dramatic-ballad, and he proceeds to stop the music, steal the man’s chair and place it on stage. Never once is he not in control of his audience. He harangues numerous audience members, has multiple costume changes and makes unreasonable demands of his own band – he is a diva through and through, but because he makes us laugh hysterically we lap it up.

The show is entertainment at its finest – but he leaves the show on a poignant note that really warms to the core. After concluding the tale of his childhood with a beating from a bully and his mother putting makeup on his scars in a hospital bed, Reuben Kaye gives a brief speech about allyship that gets just as much applause as his performance. Having worked the audience into the palm of his hand – he says, ‘Just because you personally may not have a problem, doesn’t mean you shouldn’t act. If someone has a problem, we all have a problem.’ He goes on to recommend other small-venue shows, urging us to support the artists who need support. Despite having thrown out dark and dangerous humour for the past hour, this support does not feel tokenistic – he is using his platform in a meaningful way. He drags his hand up and down his feathered gown in a dramatic gesture, and looks at us through his spider-like lashes: ‘This is a political statement.’ He is damn right.