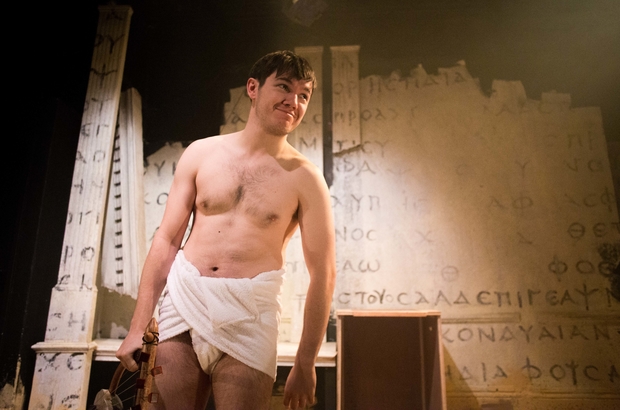 AMY READE reviews The Trackers of Oxyrhynchus at Finborough Theatre

Tony Harrison’s The Trackers of Oxyrhnchus is a work of poetic mastery. The piece is a clever reinvention of a Satyr play by Sophocles propelled into the present day by the incorporation as characters of two Edwardian papyrologists who discovered the original manuscript. Harrison juggles temporal concepts and the possibilities inherent in a fragmented text to create an astonishing political commentary on art within a lusty, crude and playful story. In its first revival since appearing at the National Theatre in 1990 (and before that in a one-off performance in the ancient theatre of Delphi in 1988), director Jimmy Walters has created a fast-paced production full of riotous fun. Yet I am left with some doubts: perhaps this production fails to investigate the depths and fissures of Harisson’s text to quite the extent it deserves.

Scripted entirely in rhyming couplets, the dialogue has a pace that spurs on the narrative as it jumps through its varying time frames. We are led from the papyrologists’ discovery of the manuscript straight into a rendition of the play itself (with it’s gaps and imperfections), and finally to a vision of a bleak, disenfranchised modern society at the end. The series of timeframes are inextricably linked by a series of pleas voiced by homeless men during the papyrologists’ initial search for poetry among the rubble of manuscripts. At the end we are returned to contemporary homeless men using these relics as their bedding. In patterning the play with this overarching narrative, Harrison provokes vital questions about the accessibility of art and historical artefacts, and the value we are prepared to invest in them, whilst seemingly happy to neglect the worst off in our societies.

The bulk of the play focuses on a riotous ensemble of Satyrs who don costume designer Vari Gardner’s striking designs, including huge stitched on penises and hoof like-boots. The expressive possibilities that the chorus parts offer were explored, but their full potential was sadly not fully realised: while some actors gave more animalistic portrayals of the Satyrs, others remained awkwardly human–there was no common physical language. While the idea of clog-dancing Satyrs works as a terrific accompaniment to Harrison’s unison sing-song couplets, the choreography was unfortunately messy, even within the intentionally rowdy style and general bombastic nature of the satyrs.

Harrison’s play balances a political commentary with a whirlwind of fun. Occasionally Walter’s direction indulged itself too much in the vulgar laddish behaviour of the satyrs, and lost sight of some of the play’s intricacies. The crude satyrs throw into contrast the more emotional points in the performance, particularly Richard Glaves strong performance as Silenus, who is beaten up by his former comrades towards the end of the play. Some less imaginative choices, such as the satyrs’ Northern accents and loutish behaviour felt stereotypically done and at times two-dimensional, detracting from more poignant moments. Likewise, Apollo’s (Tom Purbeck) exaggerated dance-like movements and affected voice were slightly uninspiring decisions, although heartily committed to and performed with conviction and style.

Finborough’s The Trackers of Oxyrhynchus does really succeed in creating a lively, rambunctious atmosphere, although the script’s subtleties consistently felt a little underexploited in this production, it brings the Classical world into collision with contemporary society in Phil Lindley’s imaginatively-designed atemporal set. Go see The Trackers of Oxyrhynchus for a lively exploration of the accessibility of art in our class-segregated society and a joyous rampage of dancing, cock-waving satyrs.

The Trackers of Oxyrhynchus is playing at Finborough Theatre until Saturday 28th January 2017. For more information: http://www.finboroughtheatre.co.uk/productions/2016/the-trackers-of-oxyrhynchus.php