Tucked away from the West End and a stone’s throw from Buckingham Palace, St James Theatre is stylish in its conception; polished surfaces and glass walls quite literally reflect the palpable glamour of the occasion. It’s a space that feels as high-profile as the famous public figures to be emulated on its stage in William Gaminara’s play ‘The Three Lions’.

For the uninitiated, the idea of spending two hours watching a play centred on football is a terrifying prospect. Based upon events surrounding England’s bid to host the 2018 FIFA World Cup in 2010, Gaminara’s play is, however, not just a satire of football. Throw in a prime minister and a member of the royal family, and within the pressure cooker of a small hotel room the result is something a lot more accessible.

The incongruity of seeing David Beckham, David Cameron and Prince William sat at a table in a hotel room nibbling their cheese and onion crisps, Pringles and pork scratchings (respectively) is something to behold indeed. Snacks aside, the play is ridiculous to its core – a witty mix of egos that never once stray into the dangerous territory of caricature. Gaminara’s sharp script straddles the gulf between fact and fiction. With the embellishment of age-old comical plot devices – twins, trouser dropping, and tipsiness – ‘The Three Lions’ is a joyfully unrealistic take on real events lavished with comic invention.

Admittedly, going in cold, the first quip falls short of its destination. Yet, as the audience acclimatises to the surreal atmosphere exuded by these hammed-up personalities, it’s a winning combination. Immediately it is evident that the humour of this dysfunctional trio of footballer, PM, and royalty lies in the actors’ near infallible performances. With the catalysis of a personal assistant, concierge (in duplicate), and a brief appearance by an Australian milkman, the plotline gently progresses until the inevitable outcome: England’s catastrophic loss of the £20 Million bid.

David Cameron, a personality that even the seasoned impersonators avoid portraying, is adeptly portrayed by Dugald Bruce-Lockhart. The hand-gestures, facial expressions, intonation and rhythm of speech he perfectly imitates, drawing laughs from the outset. He is, sadly, ousted from the limelight upon Séan Browne’s entry as Beckham. From his impeccably coiffured likeness to the footballer, Browne’s first line is delivered faultlessly with uproarious consequences. Tom Davey’s Prince William is diluted by the strongly characterised Beckham and Cameron, providing the odd “Deffo” and “Yar” in the right place to stimulate the comedy. 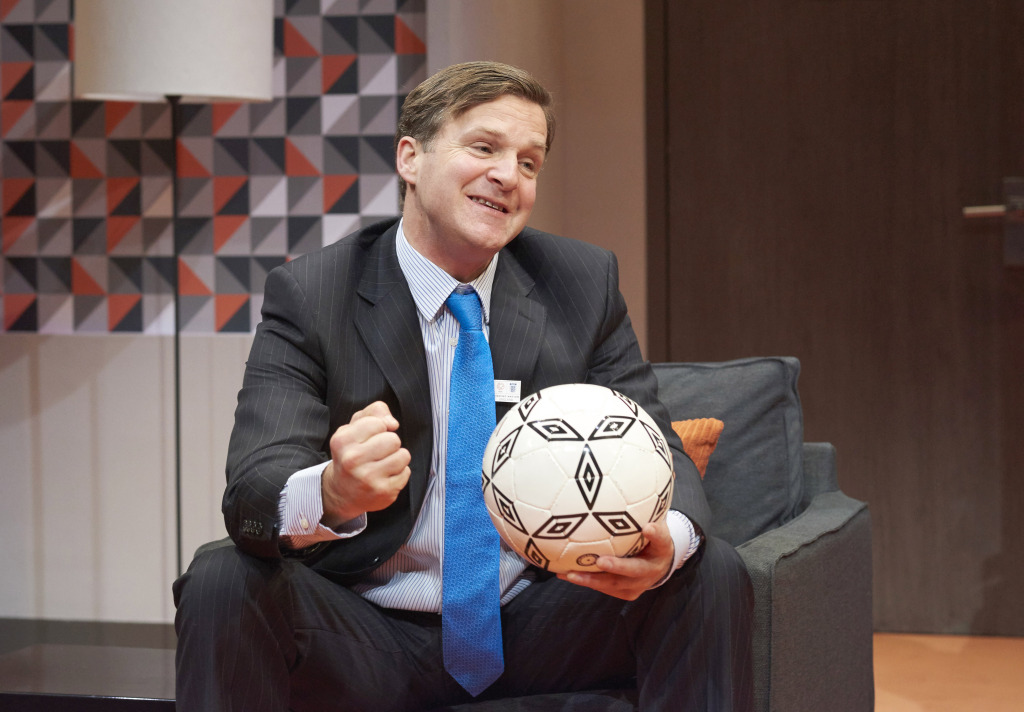 The Old Etonians strike a stark contrast with the slow-witted Beckham, whose political and intellectual ineptitude is oddly endearing. With the mention of Beckham’s “spicey girl”, and William’s “slapper” of a wife-to-be, the play is extremely cutting. Laughter abound, the play is also cringe-inducing at times. The joke of “Nick who?” wears a little thin the second time around, as does the high-strung nature of Penny (Antonia Kinlay). The punchlines can often be anticipated, and the purpose of Lewis Collier’s late, and very fleeting role as an Australian hotel guest seems a little redundant, adding very little in terms of plot development and characterisation.

The set is superbly constructed, using bright lighting and a three tone colour scheme to convey a sense of boardroom meets hotel. A television screen is used to broadcast real footage spliced with shots of the actors, to summarise the outcome of the World Cup bid, whilst doubling as hotel CCTV. A shot of ‘Boris Johnson’ in all his “inebriated” glory makes for a moment of great hilarity.

For an evening of silliness, ‘The Three Lions’ is most definitely worth the price of a ticket. Utterly convincing in their portrayal, Bruce-Lockhart and Browne steal the spotlight with nuanced body language and lines effortlessly delivered to comic effect. Although a little outdated since its first run the Edinburgh Fringe Festival in 2013, it still has a lot to offer an audience of 2015.

The Three Lions runs from 24th March to 2nd May. For more information and to book tickets: https://www.stjamestheatre.co.uk/theatre/the-three-lions/