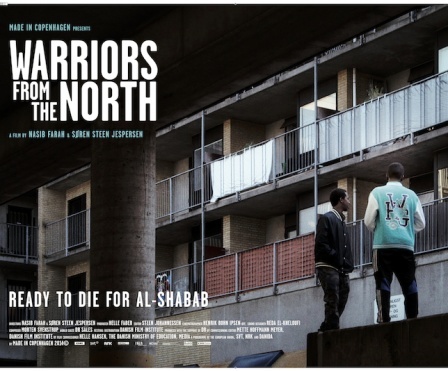 MAY ZIADÉ gives her take on Warriors from the North,  a powerful ‘documentary about a lost youth’.

The recently intensified phenomenon of second to third generation European immigrants who leave their homes to join jihadist militias has piqued ambivalent sentiments in our Western societies. Nasib Farah and Søren Steen Jespersen, the directors of Warriors From the North, offer us a discerning and touching alternative to the sensationalist reporting which has contributed to aggravating racist and Islamophobic depictions of these migrant communities.

Warriors From the North is a cutting documentary that follows the story of a young Dane who escaped the Somali Civil War by taking refuge in Denmark. The film focuses on our protagonist’s adventure with Al-Shabaab, a Somali militia and jihadist group linked to Al-Qaeda. The group is infamous for its suicide-bombings targeting the government, NGO workers, and Somali citizens, to name but a few. Early in the film we learn about an attack at a Mogadishu graduation ceremony where an undercover Al-Shabaab member, Abdi, posing as a journalist, blew himself up and killed the recent graduates, as well as some of their family members and professors. Abdi was our protagonist’s friend. The two of them were earlier part of a group of five Danish young men who shared a Somali descent and a deep dissatisfaction with life.

The young man, whose identity is kept secret, narrates a very personal story that starts with a classical pre-indoctrination tale. He was lost, abused alcohol and drugs, and could not find purpose. Abdi and his friends found him, offered him camaraderie and, most importantly, a sense of belonging. He who did not feel at home anywhere, be it Denmark or Somalia, had found a non-geographical safe space in the realm of brotherly care and Islamic values. The film’s strength is that it doesn’t use cultural relativism to exonerate anyone, but rather to highlight the fact that we are dealing with kids who are facing an identity crisis. It isn’t a coincidence that ‘Al-Shabaab’ translates to ‘the young men’: this is a documentary about a lost youth.

A more innocent, yet still appealing character in the documentary is Abukar. His son Mohamad was also our protagonist’s friend and left for Somalia with Abdi. Mohamad’s father’s presence is also a reminder that the phenomenon is generational. Apart from the occasional Facebook status or profile picture change the son is mostly missing in action, and so the source of his father’s worries. Abukar works as a cleaner in Tivoli, a magical amusement park in Copenhagen. The scenes of him cleaning the unlit and empty rides powerfully reflect the disillusion and artifice in an immigrant’s journey to the West.

The film’s pertinently paced interview sequences of other young European immigrants who joined jihadism seem to uncover symptoms of a broad transnational crisis. The interviews bless us with a panoply of testimonies and burden us with the complexities that come with surprisingly divergent responses. The interviewees’ reactions to questions in the line of ‘is the killing of innocent civilians universally criminalized?’ strongly echo our narrators’ comment that ‘Danish soldiers fight in other countries and I couldn’t see any difference, can you?’. Again, this is not meant to acquit terror acts, and our narrator is very clear in condemning his friend Abdi’s murders. Instead another character is brought into the story: the ‘rooted’ Dane. Where lies his responsibility? Where lies our responsibility?