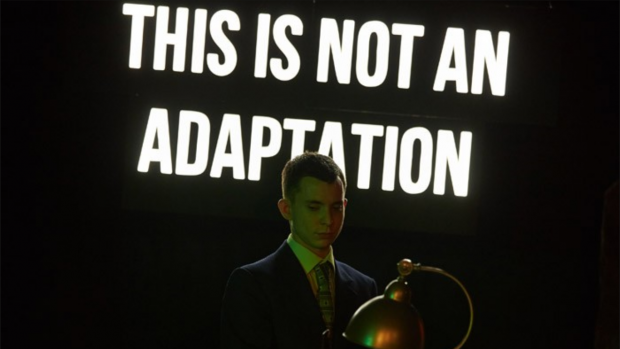 As I sit down to watch Idiots, a new show from young company Caligula’s Alibi, a voice tells me to cover my face, turn around, and then look directly at a stranger. Staring into the eyes of a woman sitting opposite me, we both slowly begin to crack up, before the voice informs us that there is ‘a reason the play is called Idiots’. The stage is set for a short but sweet hour of brilliantly comical and undoubtedly highly improvised entertainment.

Fyodor Dostoyevsky (Jonnie Bayfield) bounds on stage, hurling Monster Munch at audience and cast alike, wearing an Arab thawb, trench coat, fake beard—which he later removes, calling it ‘not serious enough’—and copious amounts of green eye shadow. Though Idiots excellently captures many of the main themes of The Idiot, one of numerous novels written by the prolific Dostoyevsky, the play remains unequivocally its own thing. A huge sign—which the company have apparently wasted all their funds on—periodically flashes at the back of the stage, reading ‘This is not an adaptation’ to stress the point. Dostoyevsky wastes no time in explaining how the play will pan out; it will be a bit ‘myuuh’ about halfway through, but will recover just in time for a ‘Hollywood ending.’ The Americans behind me roar with nasal laughter; the fourth wall is not only broken, but continuously pummelled with contemporary references and random accusations aimed at individual audience members, the cast asking them their names as ‘Johnny Kalashnikov’ (Jonathan Hopwood) plays some original melodies.

First published in 1869, The Idiot is Dostoyevsky’s most autobiographical work, a tone the play captures through its characters’ rapid emotional vacillations and painfully jumbled thoughts. Switching suddenly yet effortlessly between scenes from the novel and the inquisition of Fyodor Dostoyevsky himself, who is besieged by the civil administration of purgatory referred to as ‘Neverstate,’ the play interprets the power of the novel’s deliberate narrative volatility with great aplomb. Using epileptic seizures to bridge the narratives, which are shared by (both the real and the theatrical) Dostoyevsky and his character Myshkin, the audience is left wondering whether they are meant to be watching the ghost of the author vanishing into his own work with each seizure, some kind of deathly hallucination, or Fyodor’s reflections upon the similarities of his own life with that of Myshkin and his existential attempts to understand and qualify it.

The references to modern Britain, coming mainly from the robotic Bureaucrat’s (Adam Colborne) conniving questioning, include gags about the ‘Deposit’ and ‘Admin Fee’ for the management of Dostoyevsky’s accommodation in purgatory, as he assesses his disability benefit claim. These jokes are brilliantly executed, and it is mainly the performances of Bayfield and Colborne that carry the play throughout, though the entire four-man cast is superb. Other modern analogies include some moderate use of strobe lighting, which takes you by surprise and exacerbates the play’s reductive approach to a work of literature steeped in courtly Russian mores. The hilarious display of Rogozhin and Myshkin’s vying for Nastassya in the context of a modern nightclub is a particularly memorable example of this. Random acts of brutal violence, just as in the novel, are equally as effectively juxtaposed with comic elements, as the contemporary British context is seamlessly merged with the 19th Century Russian classic.

All in all, every aspect of Idiots is accomplished magnificently and humorously; look out for Caligula’s Alibi in the future.

‘Idiots’ was showing at Soho Theatre as of the Soho Rising season, which focuses on providing a platform for new artistic talent in London. For more information visit http://sohotheatre.com/whats-on/season/soho-rising.