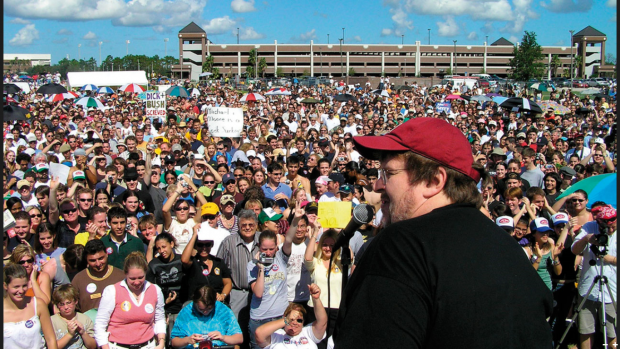 NICK MASTRINI reviews Michael Moore’s dissection of American jingoism and conservatism, ‘Where to Invade Next’.

‘Why would you wanna leave the Europe I just showed you?’ asks Michael Moore, in conversation with Owen Jones following a screening of his latest documentary, Where To Invade Next. Moore expresses his incredulity towards the possibility of a Brexit, adamant that the British public should know better. The same British public that, he knows, cannot believe what is going on in America, where Donald Trump has become an unstoppable political force.

The premise of Where To Invade Next satirises American jingoism, using Europe as the land of solutions to the problems of the United States. Though titled like a war film, Moore’s documentary is more like a political travelogue, as he travels to countries where logical, compassionate governance has improved quality of life. Criticizing the superiority complex of his home nation, Moore presents each arrival as an ‘invasion’, calmly sticking an American flag into the floor of each place he visits. In the US, he argues, ‘we don’t know what the fuck we’re doing’.

Famously critical of his home country, Moore made his name by skewering specific aspects of American society with his documentaries. In Bowling For Columbine (2002), Fahrenheit 9/11 (2004) and Sicko (2007), he dissected gun culture, investigated George W. Bush’s government, and confronted the US health care system, with critical and financial success. However, Where To Invade Next is a low-key project, a glass half-full concept presented with his typical humour, and an earnest rather than cynical perspective.

Watching the film as a native of America is, I imagine, a less pleasurable experience than as a European. The grass really is greener on the other side to Moore, as he finds the improvements to issues such as long working hours, minimal paid vacation, workplace sexism and the prison system, to name a few, in countries from Finland to Italy to Slovenia. Moore even ventures outside Europe to Tunisia, where, despite recent political turmoil and an uprising, government-funded family planning and female clinics are in a better state than back home.

Moore manages to be funny while making a serious point, balancing lines like “Italians always look like they just had sex”, with intriguing vox pops and statistics. One infographic attacks the notion that improving public services would mean excessively high taxes — he argues that taxes are lower in America because they ‘don’t call them taxes’, but rather ‘tuition’, ‘deductibles’, and so on. And costs rise far beyond European nations once you take this into account. Other aspects of American conservatism, such as the idea that ‘abstinence works’ despite high teen pregnancy rates in areas like Texas, provide the spark for Moore’s adventures; in this case, he heads to France, where sex education seems to make more sense.

Where To Invade Next suggests that the American Dream only exists because it is beyond one’s reach; a dream cannot be made a reality. There is no French, Italian or Finnish Dream — these countries, he argues, have made realistic, patient steps over time to avoid an ethos that values goals that are unattainable and misleading. Free tuition; low working hours but greater productivity; short school days but greater literacy — these are tenants of an effective society, and that’s all that Moore is looking for.

When he heads back to the Berlin Wall near the film’s conclusion, he acknowledges that ‘anything can happen’ in politics and in government. Months after shooting his film, and with Trump and Brexit raised on a pedestal, ‘anything’ might not be what Moore was looking for. But there’s always hope that things can get better.

‘Where To Invade Next’ is now showing at the Bertha DocHouse.