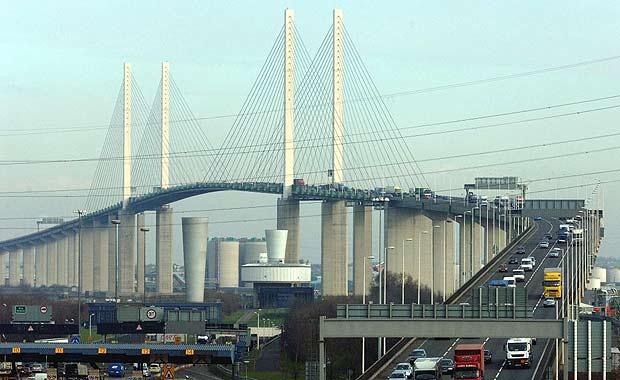 A suicidal 23-year-old and a lonely toll machine supervisor meet at Dartford Crossing, what follows is a timeless ascent from depression to self-acceptance.

While the dim light of the Pleasance Theatre in Islington lowers the expectations of a theatergoer, the dingy scent that accompanies it seems to accidentally add to the sensation of being on the impressive bridge. Indeed, the physical setting unwittingly prepared the small audience for follows; loneliness, depression and fear command the lives of Vinay Patel’s characters throughout the production

Andrea (Molly Roberts) opens the performance with a monologue; the discourse of a suici-dal person who believes in the liberation that death seems to offer. Liberation from what? The audience discovers the answer through Roland’s (Maynard Eziashi) attempt to rescue her.

With a tragic scream and a play of lights, the couple materialise into Roland’s toll machine booth, which here looses its physicality and is portrayed as a place out of time and space, the theatrical and metaphorical depiction of the where those who struggle with depression go to regress.

The characters share a plight. Andrea is a young ex-convict, who suffers from depression and overdoses on negativity, while Ronald, the experienced adult, is dominated by fear. They need each other, as Andrea’s thoughts describe their lives, there’s been ‘… too little paint over too many cracks.’

This feeling is amplified further by Molly Robert’s performance, which makes the audience empathise with Andrea, while not becoming too emotional. At the same time, Maynard Eziashi demonstrates how behind the most insignificant job, there can be a meaningful purpose. Contrastingly, the play’s use of lecherous language invokes a sense of comedy which provides light relief.

The combination of sound and light, wonderfully orchestrated by Jon McLeod, is an encompassing experience, imprisoning the audience’s attention in the play and aiding our empathy with the characters’ mental struggles.

An experienced team consisting of Petra Hjortsberg and Chris Snow work collaborate brilliantly to create a simplistic and suggestive setting. Successfully representative of the Dartford Crossing, whilst simultaneously stretching your imagination so as to encourage the audience to fill out the missing details.

‘Free Fall’ ultimately shows how everyone has something to live for even in the most extreme cases, and turns darkness into light by teaching the public how to morph struggle into purposeful experiences.