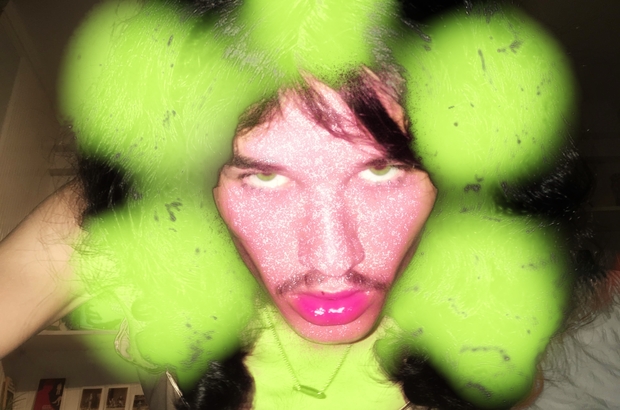 biogal_, also known as Jamie Cottle, is a non-binary transfemme interdisciplinary artist who studies English at UCL. Shelby de Rond interviewed them about their practices.

What have you been up to at the moment?

I’ve recently moved back up to London with my girlfriend. We’ve been trying to protest as much as we can, doing a little bit of organising, and then we’ve also just been chilling out, watching old campy B-movies and trying to spend some time together because we weren’t together over lockdown.

That sounds really nice. Have you been able to work much with your artistic side by creating anything recently?

Yeah, I’m constantly Facetuning; that’s something I’ve never really stopped doing. The great thing about it is that it’s all mobile so I can just take a photo, Facetune it and get going. I’m quite lucky compared to some other artist’s processes; my process is often me just dancing around my room taking photos of myself and editing them!

A piece of yours entitled Attempt to Find Root of Dysphoria was published on the SAVAGE website a couple of weeks ago. What inspired you to write it?

Whilst doing that, I realised how freeing working with AI in art is, as it relinquishes personal control, and that can be really freeing. I really wanted to apply that to my writing, because I’ve been finding writing quite hard recently, just because of the personal control element of it; I’m quite controlled about how I want it to be, and so I thought that by relinquishing that control I would find some inspiration. Essentially, I wrote my own algorithm, without the use of any external technology. I found a set of rules to follow, and I would choose a root word, and find what that roughly translates to, and then I would find the root of that. So you would end up going down this rabbit hole of root words of the word ‘dysphoria’. I really liked that, because I like art that is made from obsessions, so it feels like this obsessive hunting for the root of my dysphoria. I also liked the element of it that relinquishes this personal control and has very strict rules that are sort of meaningless—because that’s what gender feels like.

What interests you about interdisciplinary art practices and performance art?

For me, it happens very naturally. I think often a lot of the trans artists that I look up to are also interdisciplinary. I think this is because we are used to living in multiplicities — there’s so many elements to us, and the world tries to ascribe these borders and restrictions between them, but trans people are often the people who are most welcoming to their multiplicities and the liminal spaces between them. So I think that’s why my art should be like that too, because if I’m living in multiplicities, and my art is a natural progression from how I live, then it too should live in multiplicities and cross-disciplines.

So you would say your art is an extension of your identity?

Now let’s talk about the GROWN print launch, where you performed three excellent poems. It was very visual because you had lots of props as well. What do you find most important in your performances?

One of my favourite artists is Arca. She’s an experimental musician who did the producing work for Björk, and her previous albums have been very experimental. In the interview for her new and more accessible album she said that there’s a part of her that is always a showgirl, and that really resonated with me. I come from a theatre background; my first introduction to the arts was doing theatre at the weekends, so part of me is still that showgirl who just wants to entertain. I think often in the performance art world there is a shame around your work being entertaining, and I just find that quite stuffy. I want to entertain people, but I also want to live on stage and have room for freedom. I am always performing; my gender is performative, so when I’m on stage I want it to feel like an extension of me. I want to have room to grow and change.

There was something I did recently where I did this performance in a crypt (apparently there are loads of crypts in London!) and I hadn’t realised there would be a microphone on a stand. There was a point where I was on my knees and washing my face with water, and I realised that I wanted to do that whilst being picked up by the mike. I didn’t know what to do, so I looked up, and it created a position where I was kneeling and staring up, reaching up to the microphone, and the poem was about my father, so it created this stark image of me kneeling and looking up to the microphone, the microphone maybe becoming a father figure. That sort of experimentation is also what I really look for in performance art, because every time I do it, I want to discover something new.

Also, the idea of nature in general. I know that seems like quite an overdone thing by artists, but there is something boundlessly inspiring by nature. My name, biogal_ is a play on words. biogal_ originated in a transphobic realm; it was a word used by cis women to put down trans women, and they self-labelled themselves as biogirls, and I just found that so ridiculous, so I thought: right, that’s mine then! And then my name is also from my interest in biology and nature, and everything that exists in that realm. So that’s a huge inspiration to me too.

I am also very inspired by my girlfriend. Her name is Jasmine Mac’Neil and she is a huge inspiration to me. The way that she views technology is endlessly exciting to me, and she is someone that completely changed the way I look at art.

That’s really lovely. I think it is important to have people around you that you are inspired by, and that hopefully will be inspired by you in turn. Finally, let’s talk about the lockdown. Has it changed your work in any way?

The main takeaway from lockdown for me has been realising what it is like to not work. I was very busy before lockdown, and I took lockdown as the time to exercise the idea of not having loads on, because I’m one of those people who is quite uncomfortable when I don’t have loads to do.

What I’ve realised by not working is how toxic capitalism is and how much we are usually forced to work. At first I found that really difficult, and I was really pessimistic, but now I’ve shifted my thinking on it. I’ve essentially committed, with a few of my friends and my girlfriend, to a lifelong art project, where we attempt to build a commune, to create a small society all built by artists. My girlfriend has a family history of building their own houses, so the idea is that we would create a place where the main priority is just protecting the people that we love and ourselves from the violence of capitalism. So lockdown has made me reframe it all, really, because without me realising it, I had been wrapped up in this capitalist dream of being successful, and that having links to financial success, and now I’ve realised that my main goal in life is to get to a point where I can make art and just do that with the people that I love. And that is the purpose of the commune and that is now a large focus for me.

Wow, I really admire that effort, and also that lockdown has enabled you to step away from that, and to see that while capitalism might be entrenched in every social structure we have as a wider community, it doesn’t have to be.

Exactly. That is what lockdown has definitely given me, and I’m really grateful for that.