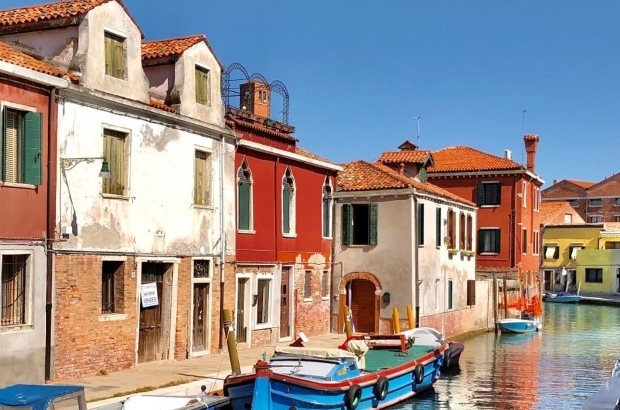 READ Curator’s note: Continuing from our previous post, this piece is the second instalment of a 3-part short story. The last instalment will be posted soon, so do check back for more!

The next day in Venice, Xin Ying asked me if I wanted to ride in a gondola with her. I was mildly surprised; she had never been one to splurge on such frivolous things. But I had secretly wanted to fulfil that dream shared by millions of tourists. What was the harm, except to our wallets?

We leaned back on the varnished wooden seats. The cushion below us was leather, and our legs stretched along the cool hull. Our gondolier was a muscular young man with a neatly shaven face. He wore a white shirt with black stripes, and he planted one boot on the tip of the bow, working the oar with his thick, trunk-like arms.

“Yup,” she replied, and then added, “we can be a bit too strict at times.”

“I think sometimes is good,” he replied. “Look at Europe now. Crisis after crisis. Weak government. Nobody taking things seriously. Sometimes you need someone to hold people firm.”

Our gondola bobbed atop the surface of the water. The narrow canal opened into a wider one. Above us, clothes fluttered from ropes strung between open windows. She was taking photographs with her handphone, pointing it in every direction. The gondolier pointed to buildings occasionally: this is a very famous gelato shop, this is where so-and-so once stayed, this is where this movie was filmed. This is where I used to live. The building he pointed to was no different from the others, the same pastel colours peeling off its sides, the same shuttered windows half-open above. But his finger lingered over the house for a moment longer.

From the longkang at the back of my block of flats, I used to look up and see my home. I always hoped my mother would not be at the window hanging clothes. When I saw her leaning over the windowsill, wielding the gala[1] pole with a few pieces of clothing hanging from it like flags, I ducked and moved as close to the side of the longkang as possible. The walls were slick with algae and moss, but the smell, especially in the wake of a downpour, was refreshing.

When the longkang was not full, it still held many wonders, perhaps more interesting than the spiralling leaves and twigs. I would carefully climb down the sides with a small bucket of water and a net. At the right time, in the right places, there would be small fish darting about in the pools left behind by the rain. I used to scoop up the fish into my red bucket and watch them swim in circles. Squatting over the bucket, I could see my reflection inside. When I was satisfied, I poured the fish back into the canal, watching them slip away into the deeper pools. I could not hope to bring any home, for fear of my mother finding out.

It was almost two months after telling her children that cautionary tale that she did. I’d stowed away the bucket on the landing outside our flat, fitting it onto a stack of other buckets. When I opened the door to my home, she was waiting for me at the sofa, drying her hands with a cloth, the aroma of oyster sauce chicken wafting from the kitchen.

She didn’t blame me, I was young and foolish, but sometimes you need to know that it really hurts when your child, you, my son, lies. It hurt her; it cut deep. Where had I learnt these things from? From my father? She certainly didn’t teach me to swindle people like that.

“Come here,” she said, nodding gravely. She wasn’t looking at me, but at the tiles in front of me, as though they were the only ones who understood her with their sharp edges and deep lines. I didn’t want to, but I did. My feet were cold against the tiles, and when she slapped me, my cheeks burned.

After my father had left, five years before that, she never raised his name. It was one of those things we never talked about. We’d pretended it was an accident he had ever found our way into our home, that without him, the three of us were a complete family. But now she talked about him in a thunderous voice. How he misled her, how he misled us. That after he treated us so badly, he left us, escaping out of our lives with his mistress to go and live in her big mansion and drive her sports car.

“Do you want to be like that?” she asked me.

We trawled through the maze of canals, watching people crowding the bridges above. Most of them had their backs to us; they were taking photographs of themselves, and we were just part of their background.

Soon we emerged into a wider waterway. The buildings had been slowly receding from the riverbanks, and now they stood respectfully away from us, leaving a passageway for people to walk through. But as they retreated they grew taller, their windows more ornate and their colours more vivid.

There were more boats docked at the banks, waiting for passengers to take them for rides. Some were old-fashioned gondolas like ours. Some were speedboats. Their white hulls shone brightly on the surface of the water.

“Look,” she said, pointing to a speedboat. At first I thought she was admiring its shape, but then I realised that she was actually pointing to its shadow on the water. A group of small fish had congregated there, perhaps escaping the harsh summer light, or maybe feeding on barnacles growing on the hull.

“They’re so cute,” she said. “I think we should get a fish tank too, what do you think?”

I smiled. She’d often complained to me that her parents never allowed her to keep pets. She’d wanted a dog for as long as I could remember, but recently she acknowledged that if we were both working adults, taking care of a dog, like taking care of a child, would not be feasible. This was her compromise: low-maintenance pets which did not need much besides water and food. They were relaxing to look at and a pretty addition to the imaginary household we’d been talking about. This household had yet to be moored in any country: instead it floated in the oceans of our minds, wandering through the waves.

Suddenly I remembered the guppies I used to catch as a child, bending over in the longkang to scoop them from the water. Their translucent silver bodies shimmering in my bucket like pieces of fine jewellery. And when I emptied them back into their natural habitat, they swam away, zipping through the water. I knew I would not see them again.

“Funny how they have a whole ocean out there and they choose to be here,” I said.

“How far out into open waters can we go?” I asked the gondolier.

“Cannot,” he shook his head. “We will capsize. You want to go to other islands? Murano? Take the waterbus. Ferry. Big boat. Buy the ticket there.” He pointed towards a crowd of people jostling below a sturdy metal shelter. A white boat was docked there, and it was already spilling with passengers.

When I announced to my mother that I had gotten a scholarship to study in Oxford, her expression was imperceptible. Her face reminded me of a still pond, where no fish broke its surface. Beneath her skin, I knew there must have been a torrent of activity.

“When did you find out?” she asked.

She nodded and looked away, as though my answer had been a great relief to her.

“Do you have friends who are going?”

“What about Xin Ying?”

She blinked. I thought she was going to tell another story. Perhaps how my sister had left a few years ago, and now she was attached to an ang moh[2] in the US. Or maybe she knew a friend’s son who had gone away and become a drug addict, mixing around with all those people. Or how she’d heard how good the national university was in Singapore, how its ranking in the top universities was going up.

But she said nothing, and that said more to me than anything else. She stood up and went to the bathroom, closing the door behind her, leaving me alone on the sofa with that lingering question.

What about her, my mother? Where would that leave her?

[1] A long pole usually made of bamboo. It is used to hang clothes for drying, especially in high-rise flats.

[2] A Hokkien dialect term meaning “red hair”. It may refer to a white person or Western culture, sometimes with a negative connotation.