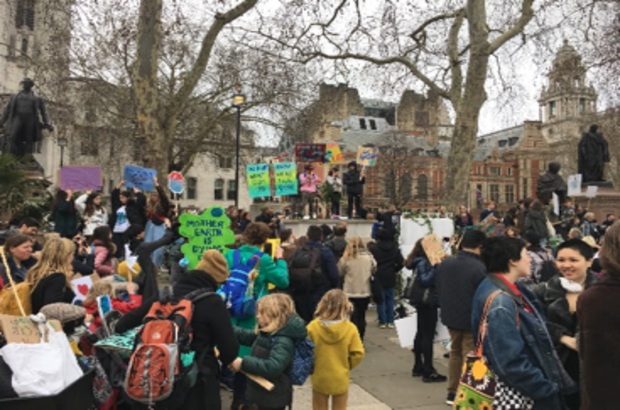 To spontaneous cheers and rallied chants, flowing in harmony with the London roads and constant traffic, a wave of UCL, LSE, King’s and SOAS students came together on Friday morning to protest about the government’s climate inaction.

‘An issue that transcends all others’

However, this strike was not an isolated incident, but part of a global movement started by Greta Thunberg, a sixteen year old from Sweden. A protest which began with one girl missing school to sit with a sign outside the Swedish Parliament has inspired and united students across the world to fight for their futures.

The climate strike on 15th March was also the second of its kind in the UK, replicated not only across the nation but internationally, too, taking place in over 100 countries worldwide. Let down by their politicians and fearing for their futures, a generation of young people have decided to redress the power imbalance .

‘What’s the point in education when there is no future to work for?’

In the aftermath of the first climate strike, the UK Parliament held a session to discuss the strikes, and consequently, climate policy. During the hottest winter the UK had witnessed, following a mass protest from this nation’s youth, only a handful of MPs deigned to turn up.

When discussing the necessity of a second strike, we need only look at this photo to understand politicians are yet to receive our urgent message.

When talking to students about what more the government could be doing to tackle the serious threat climate change was posing, there was no shortage of responses. We must invest in renewable energy, end mass production, and manage the dangerous pollution levels in central London. Even seemingly obvious suggestions , have gone unconsidered by Britain’s main political parties. Debates on climate change are poorly attended, and manifestos mention the issue only in passing.  A common theme amongst protestors was frustration at the neglect of climate policies in lieu of prioritising Brexit. The government needs to be reminded that its purpose is not solely to execute Brexit, but to recognise their wider responsibility to address an existential threat, one that they have helped to cause.

Surrounded by picket signs and outraged voices, we were handed masks to cover our mouth and nose as we inhaled the grimy fumes. It felt like a scene from a  dystopian future.

A buzz of excitement, a sense of hope and a drive for change ran through the crowds and the community atmosphere within Parliament Square itself was electric. Sharp cries rang through the air:

‘Hey! Ho! Fossil fuels have got to go’

‘What do we want? Climate Justice!

Hearing this unified cry for change filled the heart with pride. However, when speaking to school students it became clear that some teachers and schools were less than encouraging. A group of fourteen-year-olds spoke about the hostility they faced in deciding to exercise their democratic rights. Head teachers sent school wide emails urging parents to forbid their children from attending, pupils have been threatened with detentions and suspension and hundreds of young people have been made to feel guilty for using their voice to create a better future for themselves. ‘The people who have the power to change things are not, so now it is up to us’, one girl told me.

One glance around the square showed people as young as 5 to those in their mid-20s all working towards the same cause.

‘We are the voice of tomorrow’

Is this enough? The question all young people will be asking themselves as we wait to see if the government will respond to our pleas. On an international scale, Greta Thunberg has been nominated for a Nobel Peace Prize. Governments are beginning to understand this is not simply ‘a group of children complaining’, but a serious movement that is not only working towards but expects changes to be made. With the deadline for Brexit looming and a parliament divided and in chaos, it is difficult to see them making this a priority in the foreseeable future. Perhaps ‘truancy’ will only be the beginning of radical steps our generation will be forced take before our protests are heard.

Climate change is not an issue we can afford to delay any longer. There is an increase in natural disasters, from the fires ravaging the west coast of the USA to the flooding across South Asia to the drought plaguing countries all along the equator to the ice melting in the Antarctic. Our planet is suffering and we must hear her cries.