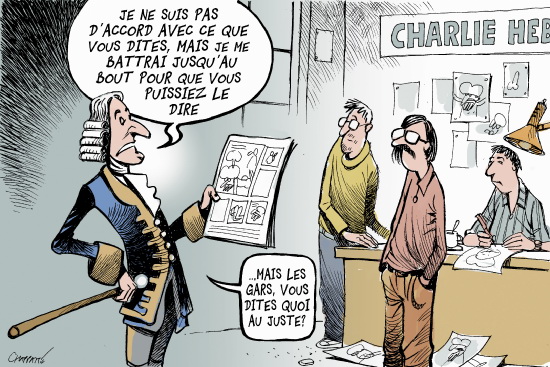 I hate the word sacred. As soon as anything becomes sacred it implies that it has become untouchable. When something becomes untouchable and out of the reach of the satirist’s long arms, its disciples have the potential to act without fear of retribution.

A few years ago I saw a stand up show in London in which, quite unexpectedly, the comedian performing brought out a copy of the Koran. There was a sharp intake of breath from the audience and no one exhaled for about five minutes. The comedian then went on to ask questions regarding the nature of the word ‘sacred’. The 8000 strong audience started to fidget nervously.

‘What if’, he asked, ‘I were to throw this book on the ground right now?’ You could have heart a fly fart. ‘What if, I were to burn it?’ No! Don’t burn it. Please don’t burn it. He then proceeded to bring out a copy of Harry Potter and the Prisoner of Azkaban (cue the unanimous exhaling) and asked the same questions. What happened next was the interesting part. He removed the cover from the Koran to reveal it was just another copy of J.K. Rowling’s third Harry Potter novel. ‘Is it still sacred now? What if I burn a copy of Harry Potter with a cover of the Koran on it? What if I burn a cover of the Koran that I made myself at home with cardboard and prit-stick?’

I don’t know where the line of freedom of speech should be drawn. I do know that I believe freedom of expression should absolutely extend to satirical portrayals of religion. Many writers have been asking these past few days: was this publication purporting to strike a blow for freedom, when in fact it was only perpetuating an environment in France that was already seen by some as hostile towards Muslims? No, they were not. Charlie Hebdo is a satirical magazine. The whole point of it is that it satirises ruthlessly. The two terrorists who carried out the attack did so under claims that they were avenging the Prophet, after Charlie created images of him, which is forbidden in Islam. Whether this was too close to the disrespectful side of satire or not should be irrelevant – the ability to satirise anything (however bawdily or irreverently) without fear of harm or imprisonment is a defence against oppression.

Charlie Hebdo is, as the Europe editor of the Financial Times wrote, “a bastion of the French tradition of hard-hitting satire. It has a long record of mocking, baiting and needling Muslims”. Yes, that’s true. However, he failed to elaborate that the satirical magazine has a long history of mocking, baiting and needling all institutions, be they religious or otherwise.

In the wake of the terrorist attack, certain cartoonists and journalists have expressed surprise at the outpouring of support for Charlie Hebdo. This assembling of the public may seem slightly disingenuous, as it is towards a publication that cultivates irreverence and has made an art of making enemies. Gérard Biard points out the irony of the unequivocally anticlerical publication being canonised by an institution they lampooned so mercilessly in one of the most famous cathedrals in the world: “Ils ont fait sonner les cloches de Notre-Dame pour Charlie, non mais on rêve!” (They are ringing the bells of Notre-Dame for Charlie, are we dreaming?). Moreover, that the manifestation should proceed on a Sunday of all days, as if it were some kind of pseudo-religious event, would have the cartoonists turning in their graves.

Several other employees of Charlie Hebdo have been shocked at these displays of solidarity for a magazine that few still supported days before the attack. In fact, it seemed like it was on its last legs. Paradoxically, in trying to destroy the journal the terrorists have made it stronger than ever, with three million copies of the latest edition being printed in the aftermath.

The unprecedented surge of support for what Charlie Hebdo brazenly represents – freedom of speech – is comforting to the nation and has resonated throughout the entire world. However, it may be in danger of becoming something darker and more dubious. In fact, several Charlie Hebdo journalists, such as Laurent Léger, did not attend Sunday’s rally on the grounds that some of those clamouring for ‘freedom of speech’ are actually opportunists with motives that are nowhere near as pure.

Almost immediately after the attack the paper was being embroiled in political power play. The deaths of the French cartoonists were unashamedly used as pawns in personal struggles for power by the likes of France’s Marine le Pen and even Nigel Farage. Le Pen has already called for the reinstating of the death penalty to France’s “legal arsenal”, and her far right party is expected to enjoy a poll boost in the coming weeks.  What more neatly bound advertising package for far right political parties across Europe to demonstrate the supposed “failure of multiculturalism”, than Islamic extremists at the gates of democracy and personal freedom shooting their way through the fourth estate?

We must keep in mind that what Charlie Hebdo did best was satirise. To drag its name into anything other than the support of a grieving nation and the support of freedom of expression would be to do its deceased cartoonists a great disservice. “Je suis Charlie” should not mean “I am an Islamophobe” or “I stand with Le Pen”. It should mean “I stand with The Pen”. But more importantly, it doesn’t mean that Charlie Hebdo becomes sacred either. Satire should be the ultimate representative of freedom of expression. Just like that which it comments on, Charlie itself should remain fallible.