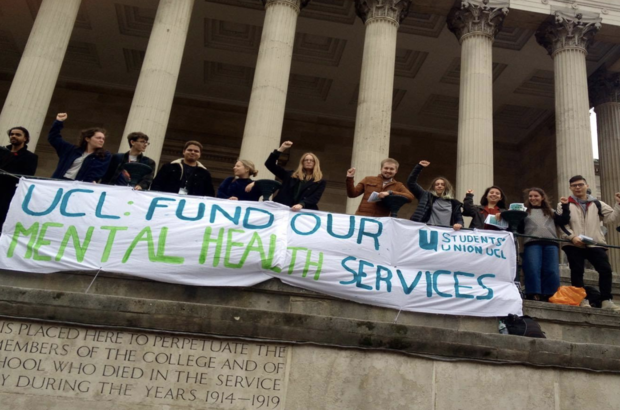 There’s a mental health crisis going on across universities in the UK, and UCL is certainly not exempt. Within the last 10 years, the number of students who have disclosed mental health issues to their institution has increased fivefold to nearly 15,000 students. Student dropout rates due to mental health problems have also skyrocketed, with a record 1180 students leaving university early in 2014-2015, a 210% increase from 2008-2009. In 2015, some 87,914 students had requested counselling.

As more students seek out mental health support than ever before, UCL’s services have been exposed as severely overstretched, understaffed and underfunded. The ever-increasing student body at UCL, which has risen from 19,000 in 2006 to 39,000 today, has not been matched with a corresponding rise in funds for the Student Psychological Services (SPS). A 2016 report conducted by the Student Union revealed that SPS lacked the capacity to see one third of those who had registered for support, more than 1200 students annually. Those that were able to access the service were faced with dauntingly long minimum waiting list of six weeks.

The Student Psychological Services have recently developed a triaging system where students with more severe mental health problems are seen first. Although this reform is a step forward, it distracts from the severe, fundamental issue at the heart of SPS: the underfunding of service. This underfunding has meant that ‘less serious’ cases, including the majority of students who register support cite minor depression or anxiety, are left to compete for resources at the initial assessment phase. Because of these long waiting lists, their conditions are left untreated and can severely deteriorate.

Alarmed by the worrying state of our student psychological services, students have taken to fighting for a better-funded SPS. Drawing from the 2016 report conducted by the Student Union, the campaign has listed the following demands:

The campaign’s demands, however, have so far fallen on deaf ears. Members of the campaign occupied the Provost’s office on November 29th, but management remained unmoved on the issue. At a meeting between the student union and UCL management, two managers laughed in response to a sabbatical officer’s statement that ‘it’s fairly clear that SPS is drastically under-resourced’. The Provost has stubbornly refused to listen to the 2000 voices that signed a petition in support of the campaign’s demands, although the call for £340,000 in funding is less than the £360,000 he earns annually. UCL management’s indifference to student mental health is unsurprising, given their apathy to the precarious state across student services, which has been subject to constant cuts and underfunding. UCL management has continuously shown itself to be more concerned with profit than people.

Despite the lack of cooperation from UCL’s management, campaigners remain resolute. Will UCL Management finally be forced to listen if its prettified corporate image is called into question? Whatever the outcome, the fight for student mental health will continue.

A protest for UCL: Fund Our Mental Health Services will take place on 6th December at 14.30 in the Quad during the Graduate Open Day.