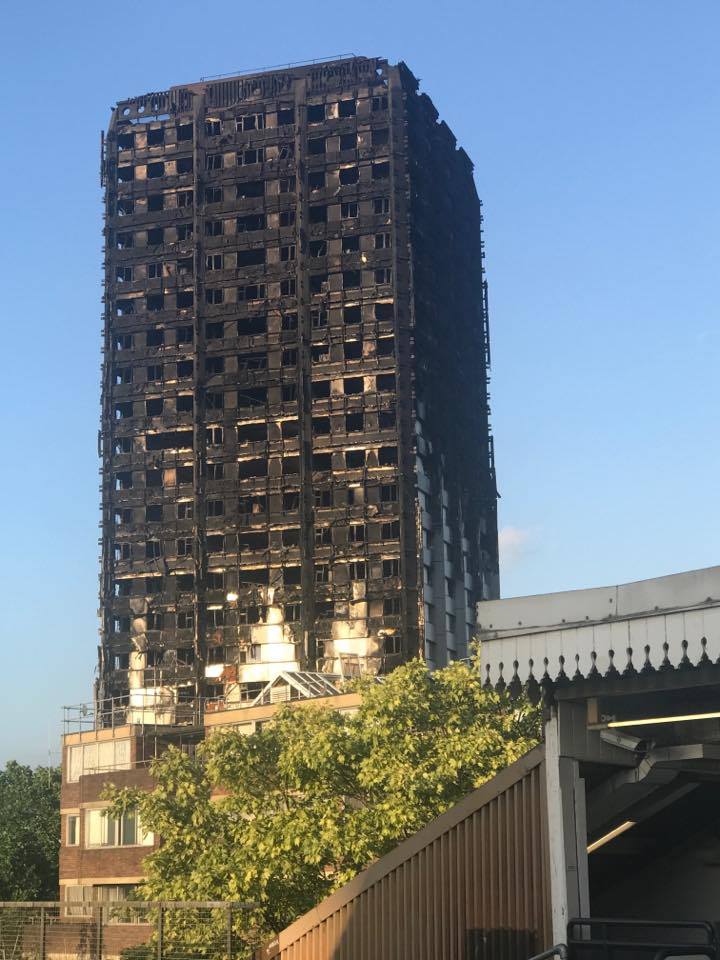 AYO OLATUNJI exposes the racism and classism at the root of the Grenfell Tower fire.

It is two months since the Grenfell Tower fire occurred, and while most of social media and society has forgotten, Grenfell still weeps. Volunteering on the ground during the week of the fire was a truly eye-opening and heart-breaking experience. It was chaotic but beautiful watching the community banding tightly together to do what they could for survivors. Now, however, we must look to answer questions of justice and accountability – and a big obstacle stands in the way.

The mainstream media claims the fire took the lives of 80 people, a number survivors and the residents of the surrounding areas will strongly refute. In the last few weeks news has transpired that 20 of the survivors have been reported to have attempted suicide since the tragedy.

Why will it take till next year to release the rest of the numbers? Where is the transparency? Where are the “missing”? We have a government cover up of the real situation – officials know full well if they released actual numbers there would have been riots. Getting straight to the point, Grenfell is an example of ethnic cleansing in a country that constantly scapegoats immigrants, and an example of government neglect and corporate murder.

Grenfell is an issue of classism and it is an issue of racism. Residents of the tower block were made up by a majority of Africans, Caribbeans, Arabs and South Asians, while the rest was made up of working class white British people. According to studies published by the Institute of Race Relations, people of African, Caribbean and Asian heritage are 75% more likely to suffer from housing deprivation, indicators of which include overcrowding and absence of central heating. The working class population of London is disproportionately made up of non-white people – whether you like it or not, this is an issue of race.

We must also understand that Conservative governments of past and present, along with the Tory controlled borough of Kensington and Chelsea, are to blame. No, Blair’s government didn’t start off the policies and trend of selling off social housing. His government may have furthered the agenda, but the selling of social housing was started off by Thatcher – her government transformed what had once been homes for the impoverished working class into lucrative investments.

This country, so-called “Great” Britain, was founded on and thrives off racist and classist laws, and Grenfell was a result of these laws. Numerous difficulties still remain in the struggle for justice for the victims of Grenfell Tower, all of which are embodied by the governmental apologists that tend to be (White) Conservative voters. This attitude is the greatest obstacle of all.

After I identified the current government as being responsible for the events on the night of June 14th, white elitist racist Britain reared its ugly head. I received messages and comments from people I can only assume voted Tory by the way they avidly defended the actions of the current government.

In January 2016 the Tories shot down an amendment put forward by Labour to change the Housing and Planning Bill so that landlords would be required to ensure the properties they rented out were suitable for human habitation. 71 of the 319 MPs (almost a quarter) were landlords themselves with obvious conflicts of interest as this amendment would mandate them to spend more money on their properties.

Years of Tory cuts to emergency services became evident when firefighters struggled to gather the necessary numbers and equipment to fight the blaze as people burned to death. Representatives of emergency services including the Chairman of the Fire Brigades Union have come out to publicly condemn the current government and their cuts to resources and funds for the services that are supposed to protect our very lives.

Kensington and Chelsea borough, through a contract with the company Rydon, saved £300,000 using flammable aluminium cladding instead of fire-resistant zinc cladding. All external landscaping works were removed, saving £428,000, and changing window surrounds from birchwood to MDF or softwood saved £117,000.

The fact that this tragedy doesn’t and didn’t keep you up at night or stay on your mind is your class and white privilege operating.

Sure, racist elites have not stood up to march in their droves for white supremacy and white nationalism here in the UK. We must however realise that the deafening silence from the white elite on calls for justice for Grenfell, and also their quickness to defend the government responsible for the Grenfell Genocide is symbolically just as significant as the white supremacists marching in Charlottesville.

Theresa May avoiding questions on Grenfell and also avoiding meeting survivors and residents directly spoke for itself. White Conservatives prefer to protect their integrity and the sanctity of their membership, when they should be focusing their efforts condemning those responsible for the murders of hundreds of people.

White Conservatives: do you not care for the people who died and their family and friends who now suffer?

Why do you care only for information and arguments that will perhaps ease the guilt on your mind and help you sleep comfortably at night?

White Conservatives, where was your outrage when news erupted that the provisional £5million promised by Theresa May had not made it to victims, and many of them still remained unhoused?

White Conservatives, did you go to the memorials set up for those who had died; did you see the stuffed toys and flowers left for children under the age of 5?

White Conservatives, did you see the ‘Missing’ posters telling you to keep a look out for people who had burned to death and whose bodies still remained in the building?

White Conservatives, people came down from Liverpool, Leeds and Glasgow to march with us to demand justice, where were you?

White Conservatives, what is your excuse? You don’t care for impoverished working class people, you don’t care about black or brown people – and this manifests itself in the party you support and vote for.

White Conservatives, you benefit from white privilege and class privilege.

The reality is we live in a country where people would rather make themselves feel better than address the problem and the crime at hand – where is your humanity?

Do not normalise the suffering of these people, do not belittle it or downplay it, do not brush it aside. They are suffering from a system you implicitly perpetuate.

Keep reading on the proceedings of the public enquiry, keep sharing on Grenfell.

“First, I must confess that over the last few years I have been gravely disappointed with the white moderate. I have almost reached the regrettable conclusion that the Negro’s great stumbling block in the stride toward freedom is not the White Citizen’s Council-er or the Ku Klux Klanner, but the white moderate who is more devoted to “order” than to justice; who prefers a negative peace which is the absence of tension to a positive peace which is the presence of justice; who constantly says “I agree with you in the goal you seek, but I can’t agree with your methods of direct action;” who paternalistically feels he can set the timetable for another man’s freedom; who lives by the myth of time and who constantly advises the Negro to wait until a “more convenient season.”

No Justice, No peace.