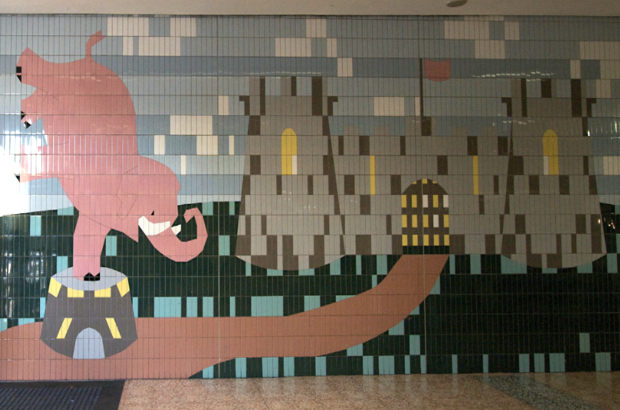 CAROLINA ABBOTT GALVÃO discusses the effect of gentrification on London’s Latin American community in light of recent events in Elephant and Castle.

Moving between different areas of London can often feel like traversing through different cities. Locations often have unique lives, cultures, and symbols of their own. As I exited the tube station at Elephant and Castle, a place I had only seen before at night, the first structure that caught my eye was a boxy modernist building. A sombre-looking giant, the Elephant and Castle Shopping Centre stands proudly despite its unconventional exterior. Its bright blue details protrude boldly against the concrete around it. Looking at the centre from a distance, it’s easy to see it as what many people have accepted it to be: an architectural blunder scheduled for demolition. However, a closer look at the landmark and its immediate surroundings tells another, more layered story.

As I enter the building, it becomes much quieter as the noise from the crowd outside the tube station dies down. Yet the movement of people inside its long hallways brings a new buzz of energy. A quick cruise around the area displays the source of this buzz, as many kinds of businesses – from Colombian eatery ‘La Bodeguita’, to a bingo venue, to a bowling alley– can be found there. The smells of Colombian specialities like arepas, empanadas, and bandeja paisa are instantly recognisable. Outside stands a small Latin American supermarket that boasts products from all over the region. Less than a minute away, Colombian, Ecuadorian, and Peruvian establishments dot the shopping centre’s surroundings. It should be no surprise that one language is dominant: Spanish.

Over the years, Latin American establishments have made the area around the Elephant and Castle Shopping Centre a cultural hub of sorts, drawing up a presence of Latinxs that live locally and visitors from other areas of London. Outside a bus stop close to the shopping centre, I briefly spoke to an Ecuadorian woman who told me she often comes to Elephant on Sundays to eat with her husband at Costa Azul – an Ecuadorian restaurant in the area. She has been in London for nearly two years now, but still remembers the day she first arrived vividly, acknowledging that she felt completely lost. To her, the area and the culture that surrounds the shopping centre can make London feel like a home away from home.

Unfortunately, though, Latin America’s cultural presence in the area is in danger. The future of the current establishments based in and around the shopping centre has become vastly uncertain as of December 2013, when the building was purchased by APG and an investment fund advised by Delancey. According to APG, their overall vision for their planned renovation of the shopping centre is ‘to provide a thriving and vibrant town centre with excellent transport connections and new homes for Londoners.’ However, although these ambitions may sound positive enough, they pose a huge threat to Latin Americans. Delancey and APG have planned to demolish the shopping centre’s existing structures and completely transform the location. As a result, the two companies’ impending plans have, understandably, raised concerns among local business owners, who are unsure of what will happen to their stores upon renovation and worry that they are not included in APG’s and Delancey’s plans for what the area should look like in the future.

It is important to note that these concerns are not isolated and the predicament faced by the shopping centre’s business owners is actually part of a much greater trend of gentrification in London. Pueblito Paisa in Seven Sisters, for example, a beloved Latin market, is also threatened with demolition. Still, many have found meaning in the particular example of the shopping centre. Its cultural legacy has become somewhat symbolic of a greater struggle to protect the influence and livelihood of Latin American and other minority ethnic cultures in the area.

In light of this, organisations like ‘Latin Elephant’, a charity that promotes ways of incorporating migrant and ethnic groups in processes of urban change in London, have been vocal in their support for Latin American and other migrant business owners in and around the Elephant and Castle Shopping Centre. Recently, the charity drafted up a series of projects that would preserve and make room for the influence of Latin American culture in the area in the face of change. These projects range from setting up a Latin Boulevard, to providing social infrastructure specifically tailored to Latin communities, to even creating a Latin American Food and Craft Market. On 9th May 2017, Latin Elephant also filed a complaint to the Southwark Council Cabinet against Delancey’s Relocation Strategy for Elephant and Castle Shopping Centre Traders and, following the charity’s objection to the planning strategy, Delancey has now modified its plan to include more holistic local business support and relocation strategies for local shopping traders.

Nevertheless, Latin Elephant still believes that Delancey’s modifications fail to address some key concerns. Another movement called The 35% Campaign, set up by local residents and traders interested in regeneration of the Elephant and Castle, blame Southwark Council for not competently managing the regeneration. Both campaigns believe that the changes do not properly take the relocation of BAME traders into account, and fail to ensure that the shopping centre remain a specialist centre of economic activity catering to ethnic minorities.

Recent successes in temporarily halting the regeneration have proved that movements such as Latin Elephant are capable of fighting the tide of crude regeneration. But despite Latin Elephant’s efforts, there is still a fear that, when it comes to Latin American businesses, gentrification will completely wipe out the cultural presences that have been so significant to the social development of the area in the past. The issue has received some attention in the media recently, with both rapper Princess Nokia and lawyer Monica Feria Tinta publicly denouncing the gentrification of Latin American communities in London. But not much awareness has been brought to the plight of Latin American business owners and their future remains uncertain. We need to redevelop Elephant and Castle in a way that effectively understands and responds to the needs of the groups that continue to shape and define the area. If we do not, we risk jeopardising the livelihoods of the people that live and work there.