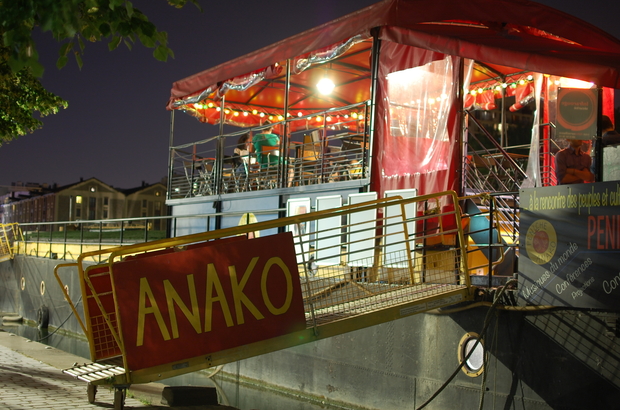 FLOSSIE WILDBLOOD interviews the team behind Péniche Anako, a Parisian cultural barge facing extinction due to a new wave of gentrification in the French capital.

Paris doesn’t exactly spring to mind as a city with an artistic scene under threat. There seems to be plenty of culture to go around in the City of Light, with its galleries, theatres, opera houses and general aura of romanticism. But beyond stereotype, and a far cry from the Monets and Manets of the Musée D’Orsay and the palatial walls of the Louvre, there exists a different, equally important side to Parisian culture. It’s one that’s more progressive, more accessible, and more reflective of the city’s diversity today – and it’s this that’s currently at risk.

This is no longer the city Joni Mitchell sung about as being ‘old and cold and settled in its ways’ in 1971, dominated by tradition and big C ‘Culture’. Like in many big cities, independent creative institutions have sprung up, and often serve a social as well as an artistic purpose, aiding integration at the same time as encouraging creativity in circles underrepresented by the mainstream. However, like in almost every big city, what began as much-needed modernisation has paved the way for insidious gentrification. The very same spaces that made once ‘rough’ areas desirable are now being forced out by those that want to capitalise on coolness. Despite Paris’s traditional image, gentrification has been progressively spreading through the French capital for a long time now, and this current wave – spurred on in part by efforts to prepare the city for the 2024 Olympic Games – doesn’t look like it’s going anywhere any time soon.

Along with several other floating venues in and around the Canals l’Ourcq and Saint Martin, Péniche Anako is a key player in Paris’s alternative cultural scene, and one of the most recent victims of the forces tearing it apart. Founded in 2009 – back when Fox News labeled the La Villette basin where it is stationed a ‘no go zone’ – this cosy black and yellow ‘barge of world cultures’ promotes appreciation of the arts, minus the pretence. Owned by the Committee for the Armenian Red Cross, it has a particular significance for the Armenian diaspora, but its eclectic programme of music, art, theatre and film has so far provided a platform for acts from over 75 countries worldwide. Anako hosts both big stars and those that are virtually unknown, and its monthly bluegrass and oriental jams operate an ‘open-door policy’ whereby everyone and anyone can come in, pick up an instrument and start playing. Named after one of the last survivors of an Amazonian people, who remained true to his heritage in the face of extinction, Péniche Anako bobs symbolically between land and sea, between cultures and generations. It has gained considerable status within the community that surrounds it as somewhere visitors can come together in appreciation of Paris’s international contingent and the unitary power of art.

Earlier this year, Péniche Anako were asked by Paris City Council to apply for a permit to remain stationed on the canal. Their application was rejected, along with those of the nearby Péniche Cinema and Demoiselle, and they were told to vacate the canal by January 2018. The letter instructing them to leave came almost entirely out of the blue for Virginia and Aram Kerovpyan, members of Anako’s board of directors, who I visited at home to discuss the council’s decision and the barge’s plan of action.

‘I think we’ve been a little naïve’, says Aram, ‘we should have expected it, because we knew that this 2024 Olympics business was coming’. They were confident about the content of their application and ‘didn’t really think it was a money-making project’, but in retrospect are clear that there were more sinister forces at play: to Virginia and Aram, the eviction was based primarily on matters of finance. ‘We were just starting to break even’, says Virginia, ‘but we’re not making enough money for their criteria, and they want groups that will make more money and pay more tax… that’s the heart of the problem, unfortunately.’ The three evicted barges occupy some of the most desirable spaces on the canal, and while they need to make money to, quite literally, stay afloat, the people behind Péniche Anako are ‘not slaves of the system’: they are committed to prioritising art they deem important over acts they feel will bring in big crowds.

Picking and choosing organisations based purely on how lucrative they are may well work on paper – introducing big franchises is not completely without its benefits – but rumour has it that one of the spaces, potentially Péniche Anako’s, will be taken by a subsidiary of the supermarket giant Carrefour. Who is really benefiting here, and who is defining what a ‘benefit’ is? According to Aram, ‘they’ve done this with ‘cités’ (low-cost housing) and they’re regretting it now.’ ‘You have a supermarket – there is no grocer, no bread shop, nothing. Now they are doing it for the cultural life of Paris.’ If things carry on like this, he muses, ‘you will go and buy your culture and arts in the supermarket.’ Not only will this attitude damage Paris’s creative heritage, it is also guaranteed to deepen social divides. Governments struggle with national strategies to promote integration and cohesion: they need these organisations, regardless of how much money they make, as grass-roots solutions to big problems – as well as places that make their cities worth living in and visiting in the first place.

This is more than just the story of a barge in the La Villette basin getting closed down. It is emblematic of a wider problem — something the response to Anako’s call to arms has made infinitely clear. An online petition set up has so far amassed more than 12,000 signatures, and their first day of action, hosted in conjunction with the Péniche Cinema, was particularly well-attended. Anako has a committed visitor base, and this is not the first time they have rallied around the barge: crowd-funding a couple of years ago to fix up the bar and terrace was ‘extremely successful’, and people have even been baptised and hosted their weddings on board. One of the numerous messages of support accompanying the petition came from Caroline Germain, who got married on Anako in June. ‘When will we realise that we must reverse this devastating trend and put culture and humanity above capital and power?’, she writes. Clearly however, the news of Anako’s eviction has transcended its original visitor base, and has come to represent something more threatening to Parisians — something they are keen to fight against.

All is still to play for: the barge reopened its doors after the summer mere days ago, and nothing has been officially announced since July’s letter. When I ask Virginia and Aram whether they are hopeful about the future of Péniche Anako, they are hesitant, but optimistic: ‘we have to be hopeful, but we’re not naïve at this point.’ Virginia emphasises how ‘encouraged’ they have been by such widespread support, but both agree that, ultimately, ‘it is an unjust situation and it’s a very dirty game – and we will not now accept anything just like that, so we’re taking the case to court.’