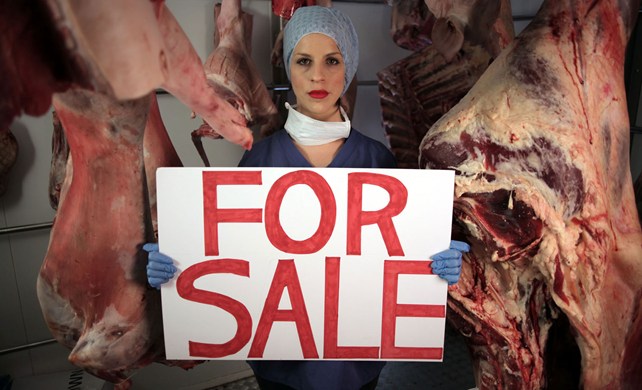 LUCY FEIBUSCH discusses what our body is worth, when dissected, while alive.

This is inspired by one of BIAS PROJECT’s events, wherein I listened to philosopher Alex Voorhoeve and director Storm Theunissen speak about what our body is worth, in both monetary and moral terms.

The concept of selling ones body, outside of the sex industry, is fascinating. I wonder, how much is my body worth? I am a student after all; could I actually sell my fingernails, like Theunissen, and buy that new pair of shoes I’ve been wanting for ages?

Indeed, from Theunissen, I learned the practical reality that if I took a video of myself painting my nails, I could get paid £20, and if I cut all of my hair off, that’s a another £50. Furthermore, if I went to America and sold my eggs I could make up to $15,000 – big bucks.

However, the theoretical aspect of this issue interests me more. I was motivated to question the current UK laws on donation, when Voorhoeve asked us to consider why we are restricted to giving certain things away from free, rather than giving them away for money. Blood, sex, organs, sex and children are common examples. It prompts contemplation on the reality of a perceived moral difference in contemporary society between giving something as a gift and giving for financial gain. Things that fall under this moral bracket are legally labelled, ‘Market-Inalienable’. It is illegal to pass over a product that is Market-Inalienable for money, but legal if we were to want to out of the goodness of our hearts: all parts of the body come under this category in the UK.

The concepts behind the elusive body market appeal to an inherent human curiosity. Humanity is encapsulated within the confines of fat and flesh: this is one of the finite truths of existence. Therefore, how would we address a part of a human, disconnected from that human? And how would one reconcile the body’s dismemberment for money during its lifetime? Or, perhaps, let us consider whether, having been separated from flesh (or an organ, for example), one can still claim ownership?

Voorhoeve outlined strong arguments for permitting the market of organs and blood, against moral inhibitions. Firstly, every year in Britain 700 people die on the waiting list for kidneys. This is regardless of the fact that it is a very low risk procedure (1 in 3000 will experience serious complications), or of the fact that it indeed benefits both the buyer and the seller, whether it is through financial gain or health.

However, would those in desperate situations feel forced to sell parts of their body? Further, and in contrary to this, would it be so bad if the sale of organs gave those in desperate financial positions the money to start again, if all other routes had failed?

Secondly, the age-old argument of our right to our own body: should the owner of our flesh and blood have ultimate power over our bodies? The short answer, I believe, is yes. The prohibition of giving away organs for money does show, as Voorhoeve attested to, the exercise of an inappropriately moralistic power in the UK.

Let us address selling one’s body in the sex industry: if one allows sex for money, it will not stop people having sex for love or fun because the two ideas are constructed differently. Similarly, can this co-existence of systems be applied to selling our bodies in a different way; if one allows the donation of organs/blood for money, would it stop people donating freely for love? I believe there is some truth in it; if a mother/father/sister/friend needed an organ that one had but did not need, at a time when selling organs had been legalised, I hope that one would not first demand a grand sum from his or her ailing family member.

However, perhaps your faith in humanity is not so high. Also, just FYI, I don’t think I am going to be selling my fingernails either.

xx BIAS PROJECT is a London based initiative that acts as a space for the exploration of the arts as a medium for social change. Through hosting screenings and discussion panels, the collective intends to demonstrate how the arts are a powerful tool in contemporary human rights discourse. xx