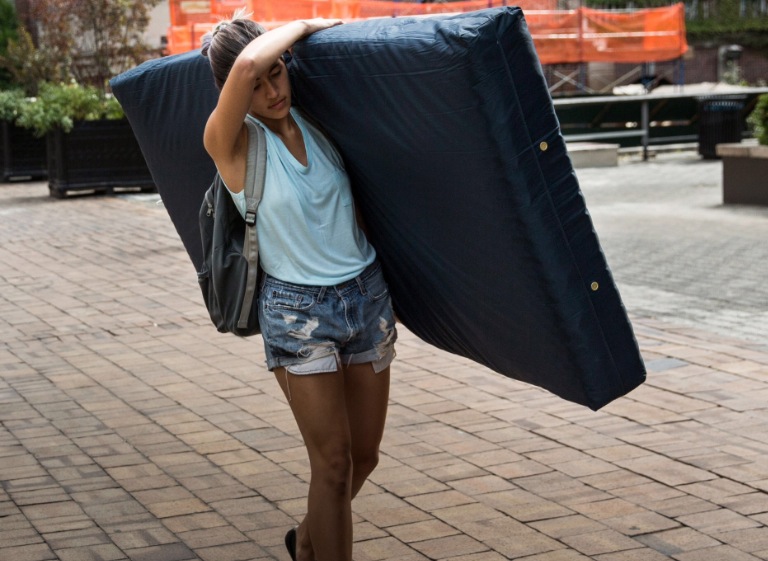 TESS LOWERY reflects on the effectiveness of performance art when dealing with issues of controversy.

On May 19th 2015, Emma Sulkowicz walked into Columbia University’s graduation ceremony carrying a mattress. This was the same mattress she had carried throughout her entire academic year as part of a widely publicised performance art piece entitled Mattress Performance (Carry That Weight). This mattress was the very one Sulkowicz claims to have been raped on. More recently, she has released a filmed piece entitled Ceci n’est pas un viol (This is not a rape), an allusion to René Magritte’s surrealist painting La Trahison des Images (The Treachery of Images) that features a pipe with the caption ‘Ceci n’est pas une pipe’ (This is not a pipe). Magritte’s painting highlights the ambiguity that exists between reality and representation, and this is a sentiment replicated in Sulkowicz’s controversial short film, released earlier this month.

Ceci n’est pas un viol was assembled by Sulkowicz in 2012, a few months after she had accused fellow Columbia undergraduate Paul Nungesser of having raped her. After the events of 2012, Sulkowicz went to the school authorities but Nungesser was eventually cleared by a campus tribunal. The film portrays Sulkowicz (playing herself) and an unknown male actor, whose face is blurred out, engaging in what Sulkowicz calls ‘a representation of rape’. Initially, the sex is consensual but it becomes violent in such a way that many people may find it difficult, even impossible, to view. Sulkowicz, a visual art student, is adamant that both of her pieces should be considered performance art. It is undeniable however that there is something very troubling about depicting a rape and auto-granting it the status of art.

Sulkowicz’s first mattress project depicted a physical representation of the burden that sexual assault victims carry around with them. Speaking in an interview with The Columbia Spectator, she described the single dorm mattress as “the perfect size for me to just be able to carry it enough that I can continue my day, but also heavy enough that I have to continually struggle with it”. For many victims, this constituted the perfect analogy for the aftermath of sexual assault. Unsurprisingly then, Mattress Performance became a powerful symbol of the movement to reform university campus sexual assault proceedings in the United States. Sulkowicz vowed to carry the mattress until her school expelled her aggressor; Columbia did not bow to her demands, and it is easy to see why. Since Sulkowicz’s initial allegation, no new evidence had been brought forward to support her claim: Columbia would have been seen as hypocritical if they had gone back on their decision to clear Nungesser of all charges. Perhaps if Sulkowicz had left her protest performance piece message-less, a more complex dialogue about considering rape on campus would have ensued.

With performance art, there is always the risk that the portrayal will detract from the matter of contention. Whilst it can be a dangerous, poignant, tearing away at the veneer and challenging of the status quo, it is also often easy to dismiss as sensationalism. Where does Sulkovicz fit on the spectrum that ranges from Yoko Ono in 1964, allowing her audience members to cut off any piece of her clothing, reducing her to rags and underwear; to Japanese artist Mao Sugiyama severing his genitals and having them fried for five diners; to Sebastian Horsley in 2000 paying £1000 to travel to the Phillippines and undergo a crucifixion? On the one hand , Ono was lauded for shining a light on the violent treatment of women in society, and Sugiyama similarly so for raising awareness and money for asexual people. On the other hand, however, Horsley’s piece was dismissed as a desperate attempt for sensation in the numbed world of a recovered heroin addict. The question of whether he was trivialising Christ’s sacrifice arose then, and the question of whether Sulkowicz is trivialising the severity of rape arises now. Does attempting to capture its horror with actors expose, or diminish the act of rape?

Mattress Performance was slightly more eloquent in its abstraction than Sulkowicz’s film. The most interesting part of Ceci n’est pas un viol is the accompanying text and questions, including ‘Are you searching for proof?’; ‘Is this to counteract your unconscious enjoyment?’; ‘Do you desire pleasure?’; ‘Do you think I’m the perfect victim or the world’s worst victim?’. For Sulkowicz, it seems the film itself is of secondary importance. She asserts that ‘it’s about your decisions [the viewer’s], starting now’ and encourages those watching without her consent to ‘reflect on your reasons for objectifying me’. Although she claims the video is not about her rape, she consistently refers to it as ‘my rape’. The website has amassed thousands of comments, ranging from eloquent responses to her list of questions to more disturbing remarks (i.e. ‘That’s the most enjoyable way to have sex’).

The text, although at times patronising, is a brilliantly effective way of encouraging viewers to confront their feelings before, during, and after viewing the piece. The scope of the website comments reveal how diverse the public’s visualisation of rape really is. In this way, Ceci n’est pas un viol is effective performance art as it leaves no viewer ambivalent. However, much of contemporary performance art’s brilliance lies in the fact that it largely depends on the viewer in order to acquire meaning. With this text, Sulkowicz conflates her artistic intent with viewer interpretation, significantly altering her role as an artist to that of a lecturer. The questions dictate how her art should be interpreted, which, in a piece about consent, weakens her overall attempt to open up an international discussion about how we visualise rape.