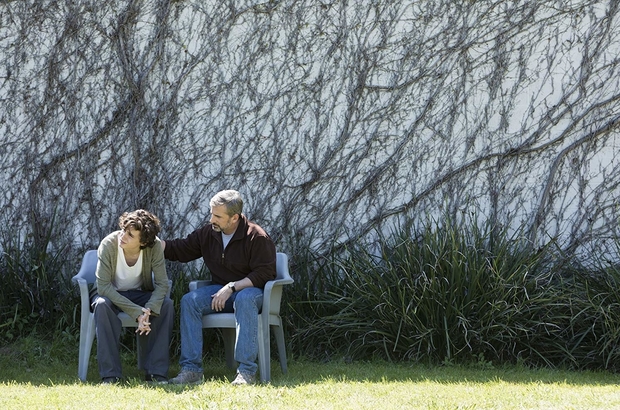 Based on the life stories of Nic Sheff (Timothée Chalamet) and his father, David Sheff (Steve Carrell), Beautiful Boy vividly portrays the struggles of addiction and recovery. Building from the memoirs of both, director Felix van Groeningen provides an intimate and authentic insight into a family life which has been tainted by the son’s addiction to crystal meth. Set in the stunning scenery of sunny California, the film follows David Sheff’s relentless efforts to understand and assist Nic. Flashbacks to Nic’s complex childhood, stained by his parents’ divorce, alternates with scenes from his late teenage years. We witness both David’s sleepless nights, burdened with paralysing fear for his son, and Nic’s cycle of recovery and relapse. This tumultuous father-son relationship forces us to question if one can ever love someone else enough to save them from themselves.

The film depicts the repetitiveness and frustration of the seemingly never-ending back and forth between recovery and relapse. Despite this, the emotions never wear off. The audience hardly gets accustomed to, nor can it predict, the return of desperation and fear. Groeningen effectively captures the contradictory nature of Nic’s character – which combines the aggressivity of a meth addict and the sensitivity of a boy who enjoys music and poetry. Just like his father, we wonder why and how Nic fell into the downward spiral of addiction. No straight-forward answer is given, and in this lies the film’s most honest statement: sometimes there is simply no clear explanation. ‘I wanted to fill this black hole in me’ and ‘my world went from black and white to technicolour’ are just two of Nic’s attempts to explain his destructive behaviour.

Among a talented cast (including Amy Ryan as mother and Maura Tierney as stepmother), Timothée Chalamet’s performance is outstanding. He flawlessly unveils Nic’s many facets, from the genuine and vulnerable boy to the enraged addict; from a scared, ashamed child to a desperate, emotionally manipulative young man. The subtlest emotions can be traced on his face. Chalamet authentically portrays a psychologically torn individual. This is likely the result of prior work with the real Nic Sheff, through which Chalamet might have gained invaluable insights into the mind and experiences of an addict.

Beautiful Boy features stunning shots of the Californian landscape. The camera lingers in turn on sea cliffs, the abyss in front of the Golden Gate Bridge and sun-drenched streets edged by majestic trees. Such beauty serves to contrast Nic’s internal darkness with his privileged upbringing. He grew up in a large house filled with art and music. An enormous garden serves as an extended studio to his artist stepmother. A seemingly secure and wealthy environment hardly makes one’s life impenetrable to the dangers of addiction. Many sequences are tough to watch. The use of heroin and meth is brutally depicted and never glamourised.

The soundtrack underpins the film’s crescendo. Nirvana’s ‘Territorial Pissings’ is used twice: for a flashback to a happy childhood moment, and later when David finds Nic on a rainy street. Neil Young’s ‘Heart of Gold’ follows Nic driving home in his car. John Lennon’s song ‘Beautiful Boy (Darling Boy)’ is Nic’s preferred lullaby. Other references include F. Scott Fitzgerald’s novel The Beautiful and the Damned and the Charles Bukowski’s Let It Enfold You – a poem recited by Chalamet during the credits.

In one sequence, Nic desperately calls his mentor for help but only receives flowery phrases for reply. He shrieks: ‘I don’t feel like I have a disease, this isn’t cancer. This is my choice, I put myself here!’ Beautiful Boy describes addiction not as a deliberate failure in morals, but as an illness. As Chalamet stated in an interview: ‘addiction knows no class, knows no race, knows no boundaries, and it’s a modern-day crisis’. Beyond combatting prejudices and clichés, the film shows the importance of acceptance and forgiveness – as much to others as to oneself. It conveys a message of hope and humanity: instead of shaming and judging addicts, and viewing them as outsiders of society, they should be helped and treated with respect.