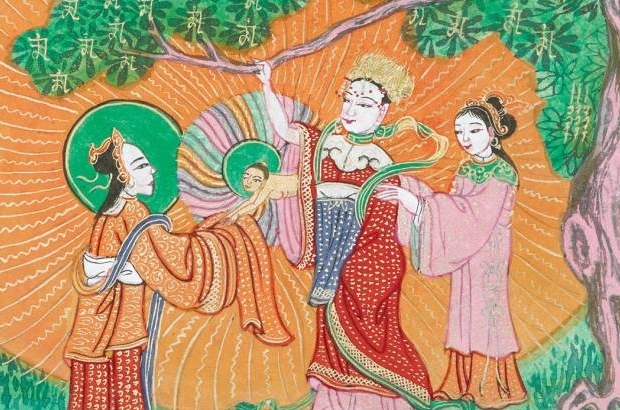 Euston road during rush hour is, to say the least, not the most desirable place to spend a Thursday morning. A cacophony of trucks and buses are complemented by a film of thick black exhaust fumes, encapsulating the chaos and exhaustion which is central to urban life. The outside of the British Library could not differ more strongly to its calm and studious interior, which is now home to their latest exhibition Buddhism.

This aesthetic masterpiece showcases lavish manuscripts, shimmering golden panels, and religious iconography, which trace the development of Buddhism from its origins in 6th-century BCE India to its role as one of the five major religions in contemporary society. In this multi-sensory exhibition, you will be serenaded by a soft, unidentifiable chorus, as your eyes feast on a collection of treasures, spanning two thousand years and twenty countries.

No exhibition on Buddhism would be complete without tracing the experiences of Prince Siddhartha- a figure whose teaching is often credited with the foundation of the Buddhist religion. Deeply affected by the poverty in his region, the Prince left his comfortable palace life in search of deeper spiritual knowledge. This allowed him to develop the ‘middle path’ between sensual indulgence and asceticism, which is the backbone of many Buddhist principles.

A highlight of the exhibition was a tapestry charting Siddhartha’s life. Initially depicting his birth, the tapestry then presents his spiritual enlightenment and his ascent to heaven, before portraying the death of his material body. This physical representation of Siddhartha’s life draws attention to the experiences which define and shape our own lives. By selectively reconstructing Siddhartha’s life through a series of key moments, the tapestry invites you to consider which memories and stories you would choose to trace your personal development. How can we organise an entire existence into a coherent narrative?

Despite being the most frequently depicted Buddha, Prince Siddhartha was neither the first nor the last Buddha to have existed. It is fascinating, therefore, to develop my understanding of the other Buddhas who were integral to the development of the religion. A personal highlight of the exhibition is the transposition of the origin stories recounting the lives of the previous Buddhas. Each story didactically focuses upon an important value of Buddhism, in order to provide the reader with a deeper understanding of the paramita (perfection) that the Buddhas respectively possess. Whilst the precise qualities which are favoured differ from denomination to denomination, some universal values – such as generosity, patience, effort and morality, form the pinnacle of enlightenment. The performative quality of these values is emphasised, as alongside scrolls listing these values are pieces of art depicting them visually.

Perhaps one of the most aesthetic lessons you will ever get, this exhibit is an unrivalled display of Buddhist iconography. One possible criticism, however, is that the emphasis on the beauty of the manuscripts results in the information about Buddhism somehow appearing secondary to the aesthetic quality of the exhibition. By obsessively focusing upon the artistry of Buddhist manuscripts and iconography, this arguably feeds into a legacy of Asian fetishism, established and promoted by British colonial rule. Instead of celebrating the intrinsic literary beauty of these texts as religious documents, the exhibition could be accused of focusing on superficial qualities that draw attention away from the original purpose of the text. Presenting the artifacts as stunning, though erudite, materials propagates the image of Buddhism as an exotic, mystical way of life, rather than as one of the dominant religions of contemporary society. This idea is reinforced by the exhibition’s failure to represent or include the 488 million Buddhists who currently practise the religion worldwide.

In conjunction with the exhibition, the British Library is holding a variety of talks and events over the coming months. Topics range from violence in Buddhist societies to traditional folk tales told through dance. Despite the sparkling insight into the Buddhist religion offered by the exhibition, attending these secondary events is highly recommended if you would like to gain a deeper insight into the religion, particularly its role in contemporary society.

‘Buddhism’ runs at the British Library until the 23. February.