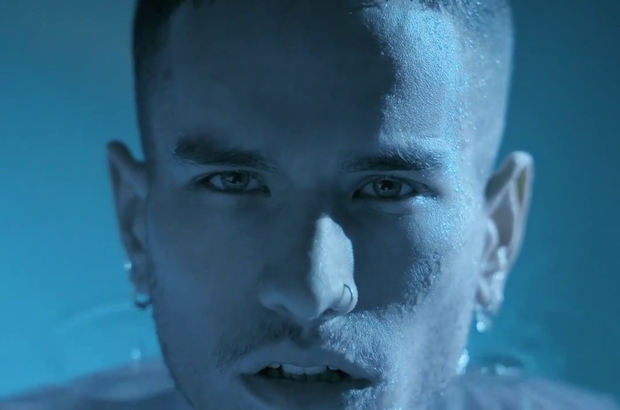 Drew Lint’s M/M is a modern-day tale of obsession. It follows Matthew (Antoine Lahaie), a lone man living in Berlin. Disillusioned with city life, he spends his days scrolling through dating apps, hoping to break free from his monotonous reality. That is until he meets Matthias (Nicolas Maxim Endlicher), a mysterious love interest who does not shy from his attraction for our protagonist. There begins a game of seduction, as Matthew becomes vehemently drawn towards this young man whom he knows nothing about. The plot comes to life through a vista of ethereal shots of various places in the city, which are the only elements one is likely to remember from the film. A lack of directorial vision makes M/M a lethargic watch, as Lint lazily attempts to scrutinise a worn out concept.

Berlin provides a quintessentially urban landscape to the love affair. The director aptly dismisses the city’s main attractions, hence imbuing the film with a sense of universality. M/M could be set just outside the centre of any large metropolis. The exquisite cinematography finds poetry in the highly industrialised scenery of the German capital – underground and residential areas share in turn the spotlight. The camera lingers on small details caught by Matthew’s gaze; from the morning sunlight reflected on a white ceiling to the irregular tiles of a public swimming pool.

Matthias is mute, and the two lovers do not utter a single word to each other. This does not preclude M/M from being a strikingly loud film, set against the backdrop of the city’s most beloved music genre: EDM. Techno provides rhythm to the storm of thoughts swirling in Matthew’s mind. Beats accompany the two ‘Ms’ as they chase and fight each other; kicks heighten the climax of their brutal, torrid sex.

In form, Lint provides the makings of an original and compelling romance. Beyond that, however, lies more the fable of an inexplicable attraction than an enlightening emotional journey. The director discounts most elements surrounding the characters, avoiding to delve into the gay subculture and musical scene of Berlin. This could prove an interesting creative venture if he did not refuse, at the same time, to truly explore the unfathomable relationship that constitutes its core subject. A complete lack of narration makes Matthias and Matthew’s liaison hard to believe, let alone to understand. We are never allowed to grasp the roots of Matthew’s ardent obsession, nor the meaning of the many scenes spent in Matthias’ workplace. His futuristic laboratory seems another indulgence of Lint in a stereotypical device – a try-hard to assert his film’s ‘alternative’ envelope. The characters’ arcs are left confusing and unconvincing; their relationship strikes as superficial, often immature and decidedly unexciting.

Music itself increasingly feels like an irrelevant distraction from the story rather than a crucial element to support our understanding of the film. The passion expressed by the characters to one another is never justified. Long-winded sequences of their seductive game are unsophisticatedly used to build momentum. Desultory and painfully endured, these scenes erase what is left of our empathy for the lovers. The plot revolves around the purely physical attraction between two strangers; a trite and limited concept from which few refreshing insights can be gained. M/M does not break much of the fertile ground it inherits.