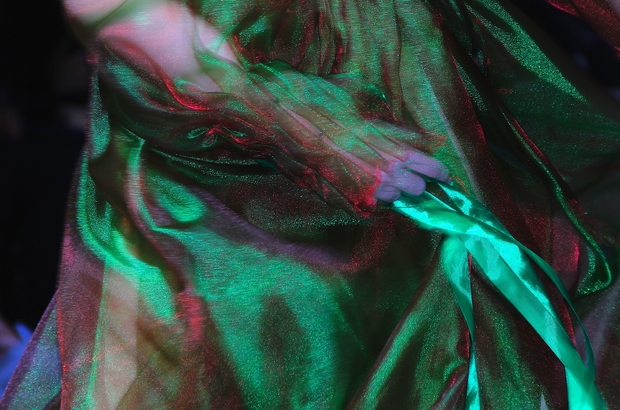 Under the railway vaults of London’s Steel Yard, SENSES showcased MODO’s latest designs. But I, along with the enchanted crowd, was met with more than just clothes; otherworldly beings seemed to surface, governing the living realm for a moment or two.

Nathan Vandevelde opened with his two-part exuberant series entitled ‘Spirit Jungle’ and ‘Spirit Jungle pt 2.’ Ethereal sea nymphs took their first steps on land in ‘Spirit Jungle’. They moved gracefully across the runway. Four drag queens with their airy gowns and delicate face masks were prominent features in ‘pt. 2.’ Their bodies were spotlit and dressed in shimmery, figure-hugging tunics. Vandevelde’s tribute to the LGBTQ+ community was both empowering and spectacular in kaleidoscopic ways.

While ‘Spirit Jungle’ was dramatic and provocative, it was Vandevelde’s line ‘Soul Searchers’ that made its appearance during the second half of the show that brought his real triumphs to light. Vandevelde commented that he intended to ‘bring watercolours to life.’ He achieved this aesthetic by adorning male and female models in iridescent fabrics that glistened and shifted in colour with every movement. The fabrics undulated in tone and shadow, reminiscent of the ephemeral forms of jellyfish. The models’ striking headdresses and flowing garments imbued them with the authority of kings and queens ruling over a world more saturated and brilliant than ours.

Ilyas Morrison was the visionary for streetwear in SENSES. His two contemporary lines were the largest collections showcased that evening. ‘Priori & Not so Basix’ was minimalist to the extreme. It was almost exclusively in black and white, with little pictorial elaboration in the cuts of hemmed fabric. Futuristic, androgynous, athletic: many descriptors come to mind when I tried to characterise ‘Priori & Not so Basix.’ But truthfully, there was nothing else quite like it at the show. Morrison’s second line, ‘DENIXM & RIP DENIXM’, spoke for itself. Denim on denim, bleached denim, dark denim, distressed denim; Morrison deconstructed denim and reconstructed the material in unexpected and innovative ways. Some of his designs fed channels of red through the seams of the fabric, while others showcased bright patches of pattern.

Nicole Holstein’s line, ‘Visionaries’, emerged from the stage’s smoke and darkness. Each design was bold. Most displayed plunging necklines and slim chains. Yet, they all assimilated into Holstein’s wider aesthetic, visually unified by recurring tones and textured textiles. Holstein’s upcycled jackets eclipse her other designs, partly because they were covered in scribbles of daring statements, such as ‘Who Am I?’, ‘We Can Change the World’ and ‘Know Yourself.’

Yuwei Peng in many ways adopted the sleek trends launched by Balmain, Chanel and Moschino’s Spring and Summer 2018 collections. PVC layering and holographic materials made an appearance in ‘Eutony’ by Valeriya Shreyber, while plastic pom-poms and asymmetrical bodysuits provided other points of visual interest. It was a shame this line consisted of only three designs. The manipulation of materials to shape them into curious forms which dominated over other formal elements of Shreiber and Holstein’s designs. Finally, Lysette Njike’s ‘Aurora’, possessed a more relaxed elegance, somewhat evocative of Chanel’s iconic vintage collections. Bursts of colour accompanied monochromatic designs and prints, once again manipulating dyes and fabric to draw focus on how the materials drape on the models, moving gracefully with the body.

Besides its design and fashion, there were many things SENSES just got right. The show was almost entirely sold out and represented more diversity in production and execution than any professional Fashion Week or fashion show by the industry’s major houses. Models of all sizes, races and genders were represented. Two girls from Morrison’s collection wore hijabs, granting the inclusion of bodies that don’t get such a chance in the Eurocentric fashion industry.

SENSES, though commendable at many points, was not flawless, particularly in its delivery. The accompanying music was often interrupted by rude interludes and rough transitions, or proclamations of ‘Siri not available’. Models were sometimes stiff as planks as they barely made it down the runway before I imagine they collapsed into heaps. The interluding performance was so autotuned and jarring I was grateful, for the first time, I had an excuse as a smoker to slip away outside.

Yet, I was pleasantly surprised by the outpouring of creative zeal exhibited at SENSES. UCL is not as well-known as the University of the Arts London (UAL) or Central Saint Martins for its art and design. In fact, most designers in SENSES were students of History, Chemistry or Biochemistry. They design fashion on the side, and the whole fashion show was prepared in the short timespan of three months. But if the UCL MODO Society’s 2019 SENSES Fashion Show is in any way indicative of the future of fashion design at UCL, I can’t wait to see what MODO will bring in 2020.

All images courtesy of Adam Pietraszweski. More information about UCL MODO Fashion Society may be found on their Facebook page here, and their website here.