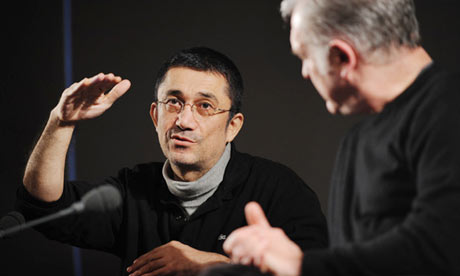 As the month-long Nuri Bilge Ceylan retrospective begins at the BFI, MAREK MAJ casts an eye back over the Turkish auteur’s remarkable body of work.

The month-long Nuri Bilge Ceylan season at BFI Southbank (27 Oct – 27 Nov) is a fantastic opportunity to discover or further explore the cinema of one the most important filmmakers working today. The Turkish auteur’s films, in an increasingly monetised and dumbed-down world of cinema, provide a much-needed dose of artistic ambition and genuine profundity. The programme includes every film of Ceylan’s distinguished career, from an early short to his latest feature Winter Sleep, which won the Palme D’Or at this year’s Cannes Film Festival.

Nuri Bilge Ceylan, 55, originally trained as a photographer; as such, the beautiful composition and use of colour in his films come as no surprise, although he has collaborated with cinematographer Gökhan Tiryaki for all of his last four films (of which his latest three have been shot in digital format). Together, they have managed to create one of the most distinct cinematic ‘looks’ of this digital age. However, to say Ceylan is interested solely in aesthetics is to do him a disservice. He has produced works of compassionate, unsentimental psychological penetration and unfashionably serious moral enquiry. Furthermore, he eschews the use of music in his films seeing it as a mode of audience manipulation. There is also a strong autobiographical strain in his work; the films are usually set in his native Anatolian region or Istanbul, and characters are often played by family members or local non-professionals.

The most impressive achievements of Ceylan’s career so far are Distant (2002) and Once Upon a Time in Anatolia (2011). Anyone interested in modern cinema should see these two Chekovian masterpieces. Distant, a Grand-Prix winner at Cannes, is set in wintry Istanbul and focuses on Mahmut, an urbane, disillusioned photographer, and his awkward relationship with Yusuf, a newly-arrived cousin from the country. In a film about the difficulty of human connection, a melancholic atmosphere pervades, but there are also moments of real wit. Once Upon a Time in Anatolia, also a Grand-Prix winner, follows a physician who accompanies the local police as they are promised to be lead to a body by two suspects. Filmed in the crepuscular light of the Anatolian steppes, it looks at times like a Rembrandt painting come to life. There are moments of genuine transcendence, as the full fragility of the characters is unearthed through a slow accumulation of detail and snippets of dialogue. It is, in my mind, one of the finest films of this century.

Between these two films, Ceylan made Climates (2005), a fascinating study of a deteriorating relationship, in which the director and his real-life wife and collaborator Ebru Ceylan play the couple in question. The mournful characters are framed against gorgeous backdrops, as if to accentuate the alienation and unspoken emotion; what’s more, Climates is the film in which Italian film-maker Michelangelo Antionini’s influence can be most clearly seen on Ceylan’s work. Three Monkeys (2008) won Ceylan the Best Director prize at Cannes and is probably his most accessible and emotionally intense work. A tangled, Dostoyevskian neo-noir drama of crime, guilt and deceit, it charts the disastrous fallout after a corrupt politician asks his driver to take the rap for a crime he has committed.

The first few days of the retrospective are devoted to Ceylan’s early films, his monochrome debut The Small Town (which will be shown along with the short Cocoon) and Clouds of May. These works, which form a loose trilogy, received relatively little attention upon release when compared with Distant, his breakthrough film, but provide a valuable insight into his beginnings as an artist. Furthermore, they are his most personal films, and the respective casts are filled with family members and friends.

If there is a single unifying element to be found in Ceylan’s oeuvre, it is perhaps an image he uses again and again, with greater mastery than anyone else: a close-up of a face. Nothing better encapsulates his preoccupation with “ordinary stories of ordinary people”. Ceylan’s films, however, are far from commonplace; there is something noble in the pursuit of finding truth in the “glint of light on broken glass”. Just like his unwitting mentor Chekov, he is a great humanist, finding little moments of unspoken sorrow in achingly beautiful vignettes. For the 2012 edition Sight & Sound’s famous Greatest Films poll, Ceylan was asked to name his top ten. He chose two films each by five directors: Tarkovsky, Bresson, Antonioni, Ozu and Bergman, and Ceylan himself is well on his way to joining that hallowed pantheon.