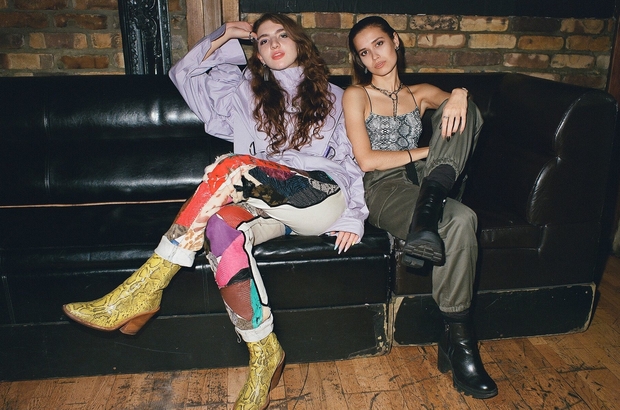 UCL MODO Fashion Society presented its first main show of the year, The Countdown Fashion Show, a collaboration with UCL Climate Action Society focusing on sustainability and the notion that ‘anything is possible.’ The palette of talent offered such designs; collections had consistently strong concepts, and each look revealed a fresh insight into the future of fashion. The clothes presented were either upcycled or produced of recycled materials, yet the garments appeared as if new. It called to remind us that we can no longer excuse our practices and lack of mindfulness towards the way we treat waste.

One common theme threaded through many of the designs was a focus upon comfort. Designs all aimed to facilitate the wearer’s movement. This basis was spotted in the casual and utilitarian designs reproduced the double denim and sports luxe. Demure was the goal in Clara Buckens’ classy ‘60s-inspired silhouettes, and Iris Liu’s standout collection of sublime smudgy prints. Split hems, shredded fabrics, and patchwork were common structural elements seen all over the catwalk. Most of the outfits presented were extremely wearable, and this demonstrates how easy it could be for the fashion industry to produce appealing pieces with minimal cost to the environment.

Special mention must go out to Ilyas Morrison for presenting a marvellous series of three streetwear collections. We may trace his creative vision through a selection of grungy skater-inspired designs featuring plenty of denim, fleece, and tattoo-inspired patchwork. Baggy, deconstructed overcoats and jeans with strategically-placed tears, behind which lay various textures bearing bright colours. This designer is one to watch, with each of his collections receiving a wealth of adoration from the audience.

Despite the determination in guest speaker Ilishio Lovejoy’s statement that ‘anything is possible,’ the show was not without a hitch. A change of venue just days before the event caused some issues with pacing. Ticketholders were left outside until 20 minutes after the advertised start time. It was, however, apparent that a gallant effort had been made to ensure a smooth show following the short-notice upheaval. It was clear the teams at MODO, and UCL Climate Action worked hard to make this a success.

In addition to the captivating work of UCL-grown talent, two guest designers inspired with their sustainably-produced offerings. The first of these being MAYAMIKO, who presented a delightful collection of slip dresses. With fabric carefully sourced from Malawi, the dresses advocated the practice of using ethically sourced materials in art, fashion, and function. An even bigger inspiration was the work of the second designer, Gung Ho. This collection was somewhat Kenzo-inspired: accented features of black fabric structures patterns of colourful motifs on the clothes, and brings forth the ensemble’s bold statement rose earrings. It emulated the fashion sensibilities of Yves Saint Laurent for Audrey Hepburn. Bright, jarring patterns evoked Frida Kahlo’s colourful traditional Mexican dresses. This contrast fortified the comfortable, yet sculptural aspect of the collection. The clothes were no longer just clothes. Fashion became functional art; the cloth became the canvas. Designs throughout the collection demanded that we hold ourselves accountable for the consequences of waste. Visual motifs of various oceanic images of creatures and manmade structures reminded viewers- consumers- of man’s strained relationship with the seas, which has come to prominent media attention of late.

The political messages gleaned from the show were sometimes subtle like that of Ho’s work above, and sometimes not so subtle. An example of the latter being when a model graced the catwalk in a jacket decorated with bottle caps, adorning her back with the words ‘Fuck Brexit’. It was clear that all of those involved in The Countdown Fashion Show wished to inspire change through the medium of fashion. The fashion industry is a part of all of our lives after all, whether we are conscious of this fact or not, and we must, therefore, act together to improve its relationship with the natural environment, before our countdown ends.

UCL MODO Fashion Society’s The Countdown Fashion Show took place on the 6th of December, 2018. The society will be holding its next fashion show “Senses” in February 2019. Follow the society’s Facebook page here for more updates. Click here for a link MODO’s website for more information.