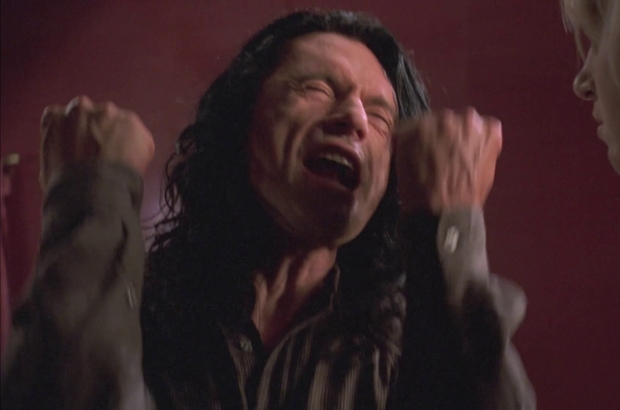 HEATHER DEMPSEY delves into the cult of ‘bad films’ through the example of Tommy Wiseau’s famously mediocre take on the love-triangle.

‘Right, I’m just going out to get some spoons, and then when I get back we’ll go over the rules.’

With this perplexing statement I was left standing bewildered in the kitchen of my flat, clutching a G&T, wondering what exactly I’d agreed to participate in as I heard the click of the closing front door. It was the long-awaited evening of our flat night out to one of the Prince Charles Cinema’s infamous screenings of The Room, the inexplicable cinematic clusterfuck spawned by Tommy Wiseau. Widely acknowledged as the ‘so bad it’s good’ film to rule them all, it has accumulated a sizeable cult following since its 2003 release. In 2009, the fan-favourite cinema, much loved for its themed all-nighters and special screenings, begun hosting Rocky-Horror-style participation showings of the film. Rowdy audiences are encouraged to play along according to a set of rules, and generally carry themselves on in heady celebration of this bizarre screen anomaly. Imagine a massive drinking game, at the pictures, where people shout and throw things instead of drinking, while also drinking fairly solidly throughout.

Before that fateful evening, I was aware of some of the associated memes that have grown out of the film’s cult fame, but I had never seen it, and was genuinely oblivious to the plot (although this hadn’t changed much by the time I left the cinema). My housemates, on the other hand, are devotees to the Wiseau faith, and took a manic delight in the idea of initiating me. So I decided, in the interests of journalistic endeavour, to throw myself (or at least agree to be shoved) in at the deep end of The Room fandom, and attempt to report the experience for the unenlightened.

The film, if it can be said to have any coherent direction, follows the ailing relationship of Jonny (Tommy Wiseau) and Lisa (Juliette Danielle) as she begins to fall in love with Jonny’s best friend Mark (Greg Sestero). Having said that, the numerous plot curveballs and bombshells comprehensively shit on any notion of a synopsis. These include the spurious role of the couple’s unnerving kid-friend Danny – who is held up by a drug dealer to whom he owes an inexplicably large sum of money – and Lisa’s mother’s offhand declaration that she ‘definitely has breast cancer’, as well as several complete randos who offer counsel to the leads throughout. Nothing close to an explanation is offered for any of these incidents. Characters play tuxedo-clad games of catch with a ubiquitous American football, screech bird-like noises at each other, and participate in some of the most excruciating sex scenes ever committed to celluloid. Needless to say, this is all wrapped up in probably the most cack-handed acting you will ever behold, and a script that seems a paper-thin parody of human speech. In the words of one critic quoted on the Prince Charles’ posters for the event: ‘I didn’t think it was possible to make a film so bad’. It’s been likened to an alien’s attempt to depict life on earth; a soup of melodramatic tropes and symbols without any foundation or qualification.

The film’s creators, the predictably batshit Wiseau and staggeringly normal Greg Sestero, gave a Q&A before the screening. One looked like a leathery skate-vampire, and a less-than-compos-mentis one at that, begrudgingly accompanied by the other, his long-suffering carer. Both men seem to have arrived at full appreciation of the film’s mind-stewing ridiculousness, and appeared equally perplexed and pleased by its cult success. In the interests of thorough reportage, I joined the question queue, and asked what advice the pair could offer to Room Virgins such as myself. Gesturing to the pint in my hand, Sestero suggested that ‘I’d drink that pretty quick’. I followed his advice. And I was glad for it as the house lights went down and the auditorium descended into what might better be described as ‘a happening’ than a film screening. Having swatted up on the rules prior to our arrival, I wasn’t completely lost. In adherence to the most famous of the lot, I lobbed the plastic spoons we’d brought along to my heart’s content whenever framed photographs of the utensils appeared onscreen. I cheered on the incredibly slow panning shots across the Golden Gate Bridge, and – my personal favourite – I bellowed ‘BECAUSE SHE’S A WOMAN’ at every instance of the film’s breathtaking misogyny, including Jonny’s lament that women are ‘just evil’. Nice. Meanwhile there were shrieks, whoops, and projectiles from all angles. Maybe they were responses to rules I didn’t know, or simply the irrepressible spontaneous outbursts of those in the grip of Room fever. At the end of it all, I stumbled blinkingly out into the streets of Soho, as if I’d just awoken from some sort of state of altered consciousness.

The Room consistently sells out at The Prince Charles and cinemas across the world; screenings are buzzing with punters, from newbies like myself to die-hards, dressed in tuxedos and film merchandise. It has numerous celebrity fans, from Paul Rudd to Charlie Brooker, and famously James Franco, who directed and starred as Tommy Wiseau in The Disaster Artist, a 2017 film about the making of The Room and the unlikely friendship between its co-creators. The odd couple have piggybacked The Room’s unexpected popularity since Franco’s film boosted it from modest to stratospheric; fuelled by his star-power, it thrust a cult classic onto the world stage. Suddenly, the pallid visage and lank locks of Wiseau became instantly recognisable to those far beyond the hardcore. A more recent effort, the Sestero-penned Best F(r)iends, continues to milk the fame. Based on true stories from the history of the pair’s off-beat friendship, its second of two parts was released last summer.

Wiseau’s effort leads a growing list of cinematic clangers that have achieved unearned cult adoration. The objectively woeful Plan 9 From Outer Space, Troll 2, and Sharknado have all become comparable phenomena. The reasons for the success of these films are not exactly clear, but their uptake with ‘millennial’ movie-goers especially seems to have increased in recent years. Perhaps it’s the hilariously hollow evocations of common behaviour; in boiling interaction down to farce, The Room accidentally highlights the sometimes ridiculous arbitrariness of social mechanisms. In this sense, it can be read as a kind of unintentional parody, one which suits the millennial taste for absurd humour. Perhaps we just love them because they make us feel like cinema aficionados, pointing and laughing from our critical pedestals; we suddenly notice all the ways they disastrously deviate from the language and rules of film, which, when done well, often go unnoticed.

Or do we love The Room, and love to feed the cult fascination, because it’s such a brazen example of one person’s madcap vision being realised against all odds, obstacles, and taste? The story of the film’s production is almost as ludicrous as the story it tells: Wiseau shovelled six million mysteriously-sourced dollars into the movie, including a reported $300,000 to keep up a huge advertising billboard beside an LA highway, and the eye-watering amount it must have cost him to personally bankroll theatrical distribution for the two week Oscar-qualifying period. Nobody knows his real name, or the nationality behind his thick but unidentifiable accent. He has managed to create something that people lap up, even if only to laugh at it, whilst flouting every rule and restraint. Perhaps what we are truly rooting for is his transformation of abject failure into massive success. Whatever the reason, nobody who embraces the weirdness of a Prince Charles screening can argue with how much fun it is. I recommend this experience to anyone disinterested by the latest Oscar-bait at your local multiplex. But don’t forget the plastic spoons.

Find a screening of The Room at The Prince Charles Cinema here.