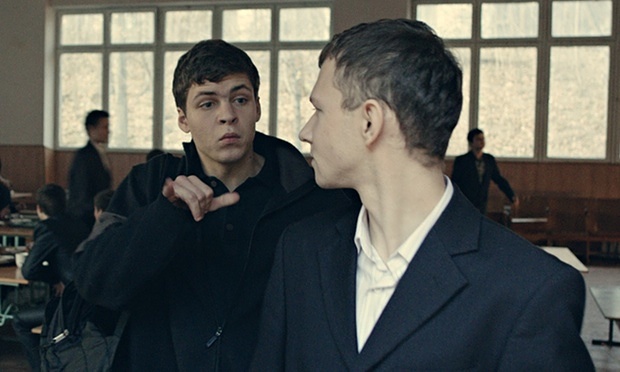 PHOEBE BENFIELD continues our look at the year’s best films with the disturbing silent film from Ukraine, ‘The Tribe’.

Occasional door slamming; the ignition of a car engine; footsteps crunching in the snow and squeaking on the floorboards; these are the sounds you should expect to hear when watching The Tribe. They’re also the only sounds you will ever hear. Ukrainian director Myroslav Slaboshpytskiy’s feature-length debut has no talking, no subtitles, and no music – and runs for two hours and ten minutes. Exploring gangs, money, prostitution, corruption, love, and loneliness, all in the setting of a boarding school for the deaf and mute: The Tribe will demand your undivided attention.

The Tribe follows a newcomer to the school (Grygoriy Fesenko), a shy boy who would like to sink into the shadows and go unnoticed by the other pupils. Instead, he is thrust into a dark world behind the dormitory doors: of gangs, violence, money and sex. Under the control of the school bullies, who run everything and everyone, he becomes involved in crime and the prostitution of two fellow female students, one of which he falls in love with.

The decay and neglect of the school, not only physically but of the people within it, allow for the concept of a group of teenagers running a gang not to become far-fetched. Although teachers are seen at the start, they disappear for the majority of the film as the dilapidated boarding school gradually becomes more prison-like and menacing.

The uncomfortable subject matter of the film is made exponentially more disturbing by the eerie silence which runs throughout. The only sounds that come from any characters are an expression of something in its extreme; whether it’s pain, anger or excitement, with thuds and grunts from the various fights littering the film. The audience are submerged in silence, and as a result become accustomed to the reliance on looking rather than listening.

It is interesting, then, that despite the film relying on visuals, there is not a single close up during the film’s 130 minutes. The Tribe is entirely shot using long shot, and in many instances the camera is placed outside looking into the scene. As a result, there are no gimmicky extreme close-ups, no panning of a wide expanse, no special effects. The audience feel as if they’re voyeuristically watching from a distance, not quite able to hear, yet completely immersed in what is happening.

Before watching The Tribe, I was of the opinion that people only watch this film for two reasons, with the first being the rather cynical reason: to watch it in order to moan about the pretentious work of a director who has stripped back his film merely to the visual. One review on rogerebert.com, for instance, hails The Tribe as ‘a hopelessly banal arthouse wallow’. The second reason, though, is for those who want to praise it as a revolutionary work: an exploration of characters without the use of speech and without any direct communication to the audience.

These people are those who argue it will be studied in years to come as a masterclass on film as a visual medium.

I am moving between both camps, and directly after watching the film it left me somewhere in the middle. Is this my favourite film of the year? Close, but not quite. Do I think this is the best film of the year? Possibly, but not conclusively.

Yet this is the film which has stuck with me the most, as something I haven’t stopped thinking about and haven’t stopped talking to people about. You become immersed in the film after seeing it in the same way you do whilst watching it. It’s at times uncomfortable and isolating, but all at once something you cannot look away from. Even if you think you would love it or hate it, watch it and prove yourself either wrong or right.

‘The Tribe’ was released in cinemas in May this year.