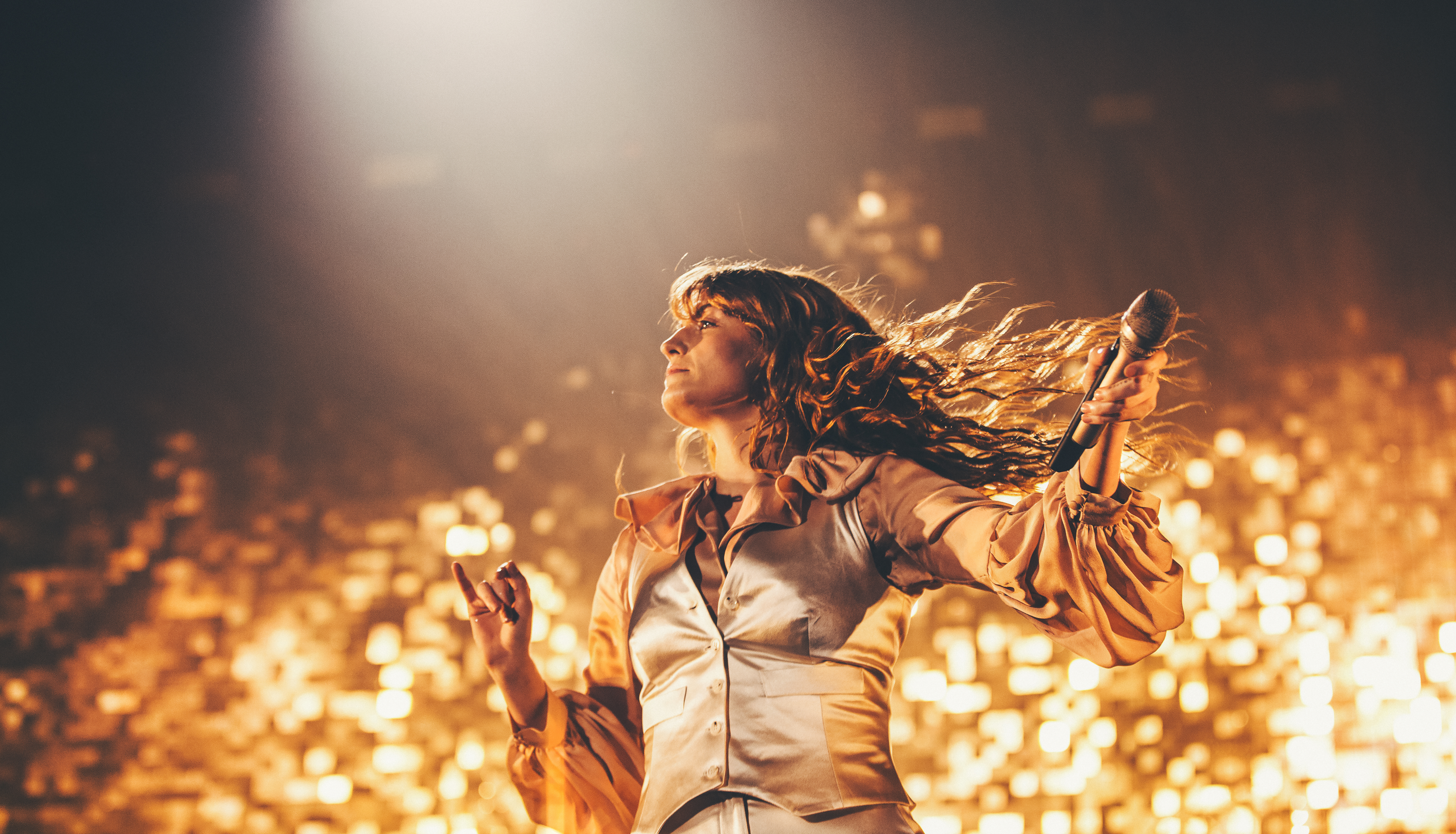 As the sun gradually sinks further towards the horizon and the rainclouds begin to disappear, the trees of Hyde Park are soaked in a golden glow. Here, in this green anomaly in central London, the atmosphere begins to shift. After a rain-soaked but euphoric set by Jamie XX and a performance from the unstoppable Kendrick Lamar, the main event is on her way. Gaggles of excited schoolgirls, jaded hippies who have seen better days, and young men wearing football shirts all wait in eager anticipation, and the clouds part like curtains ready for their star: Florence Welch is in town.

Since their 2009 debut, Lungs, Florence and her ever powerful Machine have been catapulted to global fame. Their brand of near dramatic, operatic folk-rock is never less than utterly captivating, though can at times be alienating. On their first album, the listener was on the outside looking in, gazing with face pressed against the glass into her gothic, moonlit world. The sophomore album Ceremonials (2011) continued along this lyrical path, though tracks such as ‘All This and Heaven Too’ and ‘Breaking Down’ tentatively suggested a more personal, emotional core to the writing. On How Big, How Blue, How Beautiful, Florence is at her most heartbroken, and her most frank. Rather than expelling the audience, she draws us in, writing more about her own emotions and experiences: she turns her own headspace into the dark, twisted fairyland of Lungs and Ceremonials. Indeed, Florence is no ordinary songwriter – she has cited Renaissance art and poetry as vitally influential to her as the music of Patti Smith and Stevie Nicks. She is Shakespeare’s daughter: Florence is an ethereal, woodland sprite, a Puck who draws you into the enchanted wood of Hyde Park and into her world. As a storyteller, she strikes the perfect balance between magic and direct, painful honesty.

As the orchestra swells and the wispy sighs of the backing singers float on the night air, Florence’s blue dress billows out behind her, like the waves and water of which she so often sings. The band launches into ‘What The Water Gave Me’, a ballad about the suicide of Virginia Woolf – a song about endings to begin a show; Florence has never been one to play by the rules. In a way it is an appropriate opener – Florence smiles at the audience and tells us that this show marks the end of 18 months of touring. She is saying ‘hello’ and ‘goodbye’ all at once.

Florence whirls and spins through the rest of her 1 hour and 40 minute set. For Welch, shows are an act of emotional and physical endurance. She pirouettes across the stage; she headbangs wildly; she runs and leaps like an overgrown child. Welch becomes the songs that she sings: she inhabits the eerily euphoric space of ‘Delilah’; she embodies the tremulous sadness of ‘Various Storms and Saints.’ And the audience are swept along with her, literally, as she asks us to be her choir on the anthemic ‘Shake it Out’; as she asks us to chant ‘Love is love is love is love’ as she sings ‘You’ve Got the Love’ wearing red and draped in an LGBT flag, mourning the victims of Orlando. Indeed, Welch has a power over the audience that is impossible to fake – we are in the palm of her hand. She commands us in a way that is as simultaneously close and distant as her song writing. During ‘Rabbit Heart (Raise it Up)’ she asks us to lift up our ‘girlfriends or boyfriends’, to which people willingly oblige; during ‘How Big, How Blue, How Beautiful’ she smilingly requests that we put away our phones so that she can feel more connected to every single one of the thousands of people crowded into Hyde Park. However, she does not pull an Adele, bringing people on stage or chatting to us like we are old friends. This is not Welch’s style. To a certain extent, though the band’s music has gradually become more intimate, Welch recognises that her detachment is also her strength.

By the end of the set, closed by a rapturous encore with ‘What Kind of Man’ and ‘Drumming Song’, Florence is visibly drained, but elated. The lyrics of the final song aptly begin with: ‘There’s a drumming noise inside my head/ That starts when you’re around/ I swear that you could hear it/ It makes such an all mighty sound.’ As the crowd clapped, jumped and stomped their way through the final number, this song seemed to stand as an ode to the bond between performer and fans. A bond perhaps stronger and more permanent than that between the two tortured lovers of which Welch sings.

I have always thought of Florence’s songs as a kind of exorcism, a poetic purging of whatever is dark and unsettling via the purity of her lyrics. July 2nd felt like one collective exorcism – catharsis done right. As the sun set on London and the audience filed drunkenly out towards Hyde Park Corner, one couldn’t help but sense a very happy sort of closure in the air.