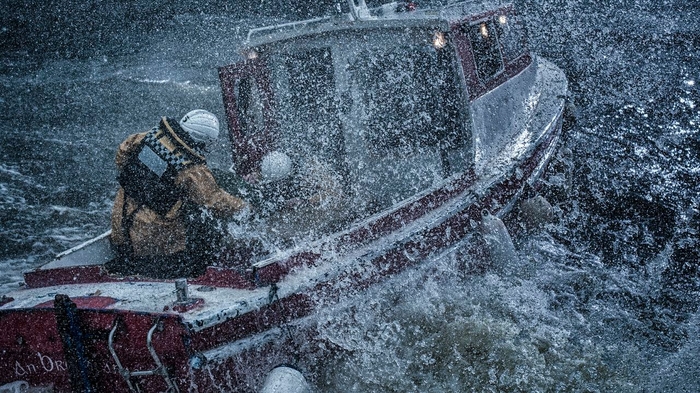 ‘An Bronntanas’ (‘The Gift’) is Ireland’s submission to the 2015 Oscars for Best Foreign Language Film, but was also broadcast as a five-part mini-series on TG4. Written as a twisty crime-thriller, it follows a three-man local lifeboat crew who, after responding to a distress call during a storm, discover a small boat filled with a huge cache of drugs and the corpse of a young woman. Their dilemma is a difficult one: hand the drugs over and report the death of the woman on board; or take the drugs for themselves and sell them on to save their coastal town’s dwindling local economy.

From the outset, it’s clear that ‘An Bronntanas’ is an inherently televisual affair, the opening credits redolent of a small-screen drama rather than anything approaching cinematic aspiration. This permeates the rest of the picture in ways which consistently impede upon the sort of immersion and suspension of disbelief necessary to forget you’re actually sat looking at a screen. First and foremost this is because the film looks, largely, pretty cheap: whether it’s the iffy explosions, a frankly unconvincing fire or, more glaringly, several instances of computer usage that are woefully digitally rendered, the film’s flaws are there for all to see.

Admittedly, these criticisms might appear a little superficial. Regardless of production constraints however, low-budget films have always managed to transcend their financial trappings by having an originality of vision in their approach to screenwriting and utilising performances of a good calibre. Sadly, the film doesn’t really have either of these attributes either. There’s nothing glaringly terrible about any of the cast’s individual acting abilities, but there are more clunky one-note exchanges to be found than in even the most mediocre of TV cop dramas. The majority of the blame for this falls squarely on the script: the pancake-flat dialogue and recycled thriller clichés are so pervasive, I found myself ticking them off in checklist fashion as the film progressed. Flashbacks to the crime complete with grainy filter? Tick. Walk-through autopsy? Tick. Generic two-dimensional love interest? Tick. ‘Be careful what you touch, this is a murder scene’? Big tick. The most debilitating aspect of the writing though (and, as a result, the entire film) is that its twists and turns unfold with an unintuitive and unnatural rhythm. The chosen development of tension, character and story may have been suited to five instalments over five weeks, but with the end of each ‘episode’ still clearly embedded into the film’s 113 minute running-time, it feels like binging on an entire season of ‘The Killing’ in one sitting – but just not as good.

That isn’t to say that the film is entirely devoid of any charm, or is terrible in some all-encompassing way. It does have one solid (if structurally derivative) dream sequence, a few stylistically impressive pieces of cinematography and several gorgeous scenic backdrops that are massively underused. ‘An Bronntanas’ isn’t offensively bad and that’s kind of the problem. It is, instead, utterly unremarkable. The film never engages enough with its character-driven moral dimension for it to be as serious in tone as something like ‘Jindabyne’, nor is it as breathless or sufficiently well-plotted to compete with a thriller like ‘Headhunters’. By the time the film moves into its third act, you won’t care who is double-crossing who, which characters are going to make it to the end or where the drugs are to going to end up; you’ll just want it all to be over.

To read more from Tom you can check out his blog here.

Image taken from the Galway Advertiser.