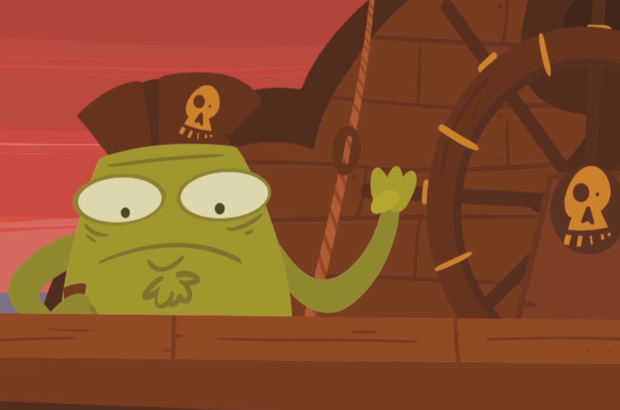 ANNETTE HOLBOURNE looks at a short animation about being on a boat with no wind.

Toby Mattinson’s Becalmed is a captivating, quirky animated short of just under three minutes that can appeal to a wide audience through its simple narrative and its bold use of colour and sound. Watching the film gave me a powerful sense of impending doom: the visualisation of being becalmed at sea communicated an intense sense of frustration. It is difficult not to be affected by the animation’s level of dramaturgy.

I have not enjoyed any animation as much since Courage the Cowardly Dog. Atmospheric and experimental, John R. Dilworth’s horror comedy cartoon of the early 2000s flaunted well-developed visuals and a harrowing blend of drama, comedy and horror that gave me much trouble sleeping. As in Courage, Becalmed uses eerie deep red backdrops that reflect and accentuate the characters’ fears. Unlike Dilworth’s landscape of mixed media (realistic textures combined with computerised hand drawings), Becalmed is coloured in soft block textures. When we first see the boat at sea, the regular dark purple waves in block colours prove to be soothing compared to what follows: the piercing sound of the captain aggressively chalking in prison-cell-like tally marks, noting the eleventh day of ‘no wind’.

As the captain sinks further into despair, his anxiety is expertly conveyed by an irked reaction to the sound of his crew members working on the stranded ship. By listening to the uncomfortable sounds of the crew’s irritating activities, I found myself empathising with the captain’s melodramatic reaction. Imagine being sat at the dinner table next to some distant family member who chews with his mouth open and slurps his food. Trying to shut out the masticating sound only makes it worse, and soon you loose all composure and appetite. This is exactly how the captains appears to feel, with the addition of being becalmed and doomed to eat fish for rest of his days.

One thing I have always admired about Courage the Cowardly Dog, which kept me watching it as an adult, is the highly sophisticated duality of Chaplin-esque comedy and levels of suspense reminiscent of Hitchcock. While Becalmed is not a horror film, it flaunts elements similar to a psychological thriller, most notably in its ambiguity. The Hitchcockian bird sounds, creaking boat, piercing knife etchings and incessant fleshly sounds are wonderfully effective in building up the tension that precedes the captain’s outburst.

As the little green captain’s anxiety builds, the audience can empathise with his increasing irritation. Yet when he loses all control and yells his lungs out, at which point the wind finally returns, the gut reaction is that of relief and laughter. The POV shot of the crew staring back at the captain, dumbfounded by his outburst, is particularly memorable. Although they are an amusing and dopey crowd of workers, the real brunt of the laughter is the captain. My enhanced understanding of his situation led me to perceive his outburst as a justified reaction.

Toby Mattinson’s Becalmed is a must for any fan of the horror, thriller or comedy genres. In just under three minutes, the audience are able to experience more tension and relief than watching many feature length films. Becalmed is a powerful and perhaps necessary reminder that length is not a factor in determining the quality of films.