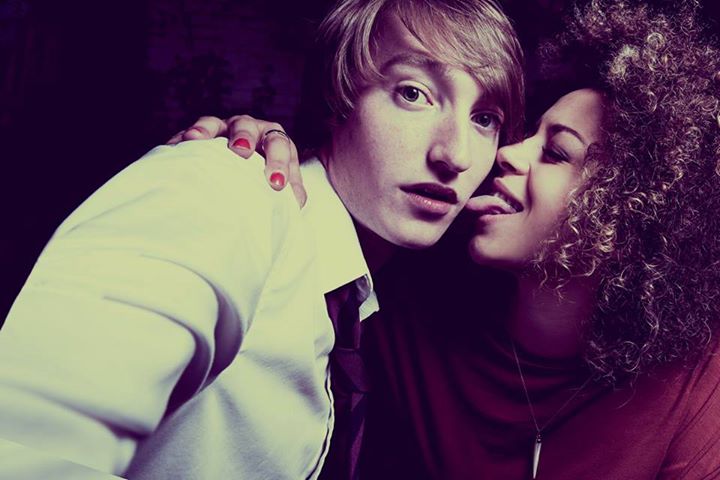 This is a play about humans and animals performed by an all-human cast with no distinguishing costume differences; only through the narrative and physicality of the play can each be told apart. When the scene opens on a family in a darkened room with only a tunnel leading to the outside, for a second I wonder if I’m watching a post-apocalyptic play about thumb-less humans before I realise they are foxes in a burrow.

This isn’t just a typical boy meets girl love story; it’s also a tale of predator falling in love with prey. Through convincing performances from the two leads, James Tarpey as lonely teen Basti and Emily Burnett as Rdeča the young fox, it’s less uncomfortable than it sounds but still somewhat curious in its execution. You may wonder how some of what happens is physically possible, but suspend your disbelief and it’s a powerfully emotional narrative. In fact the interspecies relationship is much less uncomfortable than the dubious middle-aged father and 24-year old neighbour relationship or the slightly abusive father-son relationship. It is humans who fall short of our estimations in this play, not the animals. Despite acting more basely and instinctively, the foxes have none of the cruelty or perversion of the humans.

It’s surprising how much sympathy you can feel for a domineering mother fox, Hayley Carmichael, whose stand-out performance as the overprotective animal brilliantly embodies the physicality of the role. Even as a chicken later in the scene, she continues to give a convincing and oddly emotional performance. When she stood at the kitchen door to Basti’s house and begged with only her eyes for her food—a dead pigeon the humnas had taken—you couldn’t help but be moved. The cliché of ‘puppy-dog-eyes’ pales in comparison. The exchange is painful to watch: a silent plea in a situation where the most powerful character, a vivacious single-mother of three, is forced to beg for food and accept her inferiority to the rather repulsive human, Basti’s father. As much as this is a play about foxes, it also isn’t anything about them at all. This is a play about power and where it resides. It’s about negotiating relationships around that.

The staging is compact and used to great effect: a kitchen and living room scene are set up with a barbed wire backdrop, a door on stage left and a tunnel on stage right. The scenes circle in and out of the scenery, with rooms overlapping; Basti is still closing the door, his dad putting away the milk from their Frosties, when Rdeča and her siblings bound onto the stage and into their ‘den’ through the foxes’ tunnel. As Basti and Rdeča’s worlds start to merge into one and it’s easier for audiences to believe they are able to communicate. The audience are very close to the front of the stage in this intimate space, giving the actors no room to hide and making the bloody special effects particularly impressive. Even in the small space it never seems fake or comically underdone.

Although, in parts, we were asked to suspend our disbelief a little too much. Whilst some actions were actualised, others were mimed and some had to be left to the imagination. Certain odd bits were real; real food was used for the dinner scenes and a running fridge, but real water was not, instead scenes with a hosepipe involved an odd miming of the action. This mixture of staged verses reality, along with the lack of animalistic costumes, stretched the imagination a little too far at points. Nonetheless, the entire performance remains original, thought-provoking, and highly entertaining. It is ambitiously different and definitely worth a watch, showcasing some great new actors as both leads make their professional stage debuts.

Uncomfortable moments force you to think deeper about what you’re watching; this is a play about communication, and how we can only truly communicate with someone when they are our ‘destiny’ or when we’re doomed to kill or be killed by them. The intimate staging and lack of an interval mirrors this theme. The performance is the predator, and the audience are its prey: you are brought into close communication with what you’re watching, warned of the potential dangers, and dared to be the first to look away.

First Love is the Revolution is showing at Soho Theatre until Saturday 21st November. For tickets and more information click here.