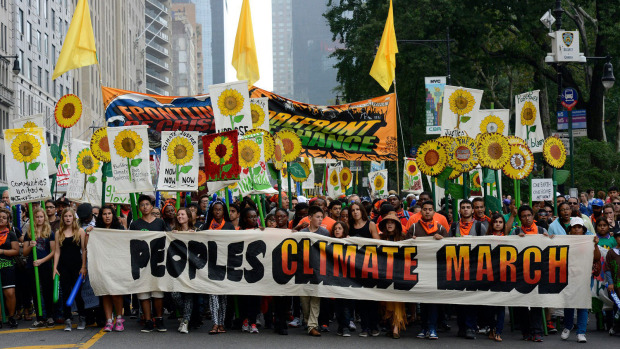 CHRISTIE DODMAN-LEAR writes about the premiere of Naomi Klein’s urgent film on climate change, ‘This Changes Everything’.

Naomi Klein’s screen adaptation of her best-selling book on climate change, This Changes Everything, was received with loud applause at its London premiere last month.

Klein’s eponymous book has a poetic rhetoric that has been translated into the film’s narration and visuals. This Changes Everything breaks away from the traditions of climate change documentaries by changing the focus from melting glaciers, polar bears or forest fires, to more relatable human subjects selected from all over the world. By making this break from the typical climate change images which we have become so habituated to, the film hopes to widen our perception of the world beyond the remote spaces of the Artic or the Australian heartland, therefore bringing us closer to the people suffering the consequences of global warming on a daily basis. This stylistic departure jolts the viewer out of the idea that the ramifications of climate change are in isolated parts of the world which bear no import on the way we live.

The desecration of Klein’s homeland, Canada, is a powerful opening scene. The film’s ability to shock is established in the opening sequence of aerial shots over the Alberta tar sands, with the planet seeming disfigured and alien. Vast swathes of Canadian forests, deemed ‘backwaters of civilisation’, have been utterly stripped. The land has been rent apart to extract the bitumen needed for the production of oil. The hellish industrial site smacks of dystopian science fiction, or a newly discovered planet, and so it proves hard to believe that the visuals are not the result of a director’s imagination, but the desecrated landscape of a progressive, first world country. These aerial shots can by no means encompass the scale of the industrialisation – the tar sands site is larger than England, and can even be seen from space.

The next shock when watching This Changes Everything is to discover that the people who still live in the area, other than the highly paid miners, are fighting to protect it, as the mining and oil spills encroach further into the natural reserves of the native people. The scope of a government’s capacity to disregard the beauty of nature is then quickly reinforced when the film aims its focus at Montana. The juxtaposing of the rolling, luscious plains of Montana with the wasteland of Alberta delivers a clear message: just where would the government draw the line? Footage of farmlands flooded with oil and toxic waste and interviews with American farmers effectively suggest that Montana is next to be subject to the rapacious governmental greed for oil. The director, Avi Lewis, might be hoping to pull on the nationalistic heart strings of Americans watching this film, with the very heartland of America portrayed as under threat from the tracking suffered by the Canadian forests.

The film also looks at Chinese city smog, the erection of hundreds of Indian power plants and protests against the Canadian gold corporation Eldorado in Greece. The tenacity of the people who fight to drive away the corporations threatening their health, economies, as well as the integrity of the land, is moving and distressing to watch. However, as the film progresses it begins to assert an increasingly optimistic message: the changes needed to prevent a rise in global temperatures need not be an upheaval which threatens capitalist society. In fact, Klein views the crisis as an opportunity for democracy to be asserted as communities learn how to navigate the law.

Furthermore, Klein encourages the idea that big business could redirect its efforts away from oil towards the creation of a ‘green economy’, though many corporations still demonise green efforts as ‘communist’. However, Klein uses the abolition of slavery as analogous to the kind of economical shifts that will need to happen. When slavery was abolished the very thing that the capitalist economy hinged upon was taken out of the equation – and yet capitalism thrived and a more civilised society flourished. Likewise the deconstruction of an oil based economy will not necessitate a collapse of capitalism; it will just change its course.

It becomes apparent that the title of This Changes Everything refers to the idea that we must change our behaviour and use renewable energies in order to live harmoniously with the land and the Earth’s natural patterns. Klein incites the audience to view the past one hundred and fifty years of industrialisation as an atrocious anomaly in the advance of civilisation. Our mindsets have altered so drastically that we no longer see ourselves as part of the fabric of wider natural forces. We believe we have dominion over the natural world since, through the twenty-four hour global economy, we are no longer bound by the cyclicity of nature.

Corporations decry the idea of depending on natural rhythms as regressive, but the film asks: what can be more backward than the callous disregard for humanity caused by our current economic state? Rather than viewing this as a step backwards, Klein explains that we will merely be adapting our advanced technologies so that they again fall in line with the dictations of nature. This sustainability is key to a civilised society, as the continual destruction of the land we depend upon is portrayed as a humanitarian atrocity, endangering those at the bottom.

The clear message of This Changes Everything is that this global crisis will not take heed of the borders of first world countries; not even the members of privileged societies will be invulnerable. In a Skype interview hosted after the film, Klein compounded this belief with the message: “those who believe it is too late, and think all they can do now is sit back and watch the chaos ensue, are operating on the assumption that they will have a chair to sit back in.”

‘This Changes Everything’ is being shown in select cinemas around the world. It is possible to organise your own screenings by requesting the film from the website here.