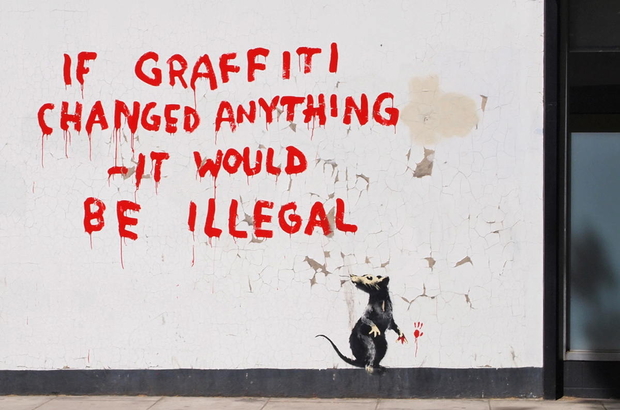 SARA M. WHITE reflects on Banksy and his communication of dissent.

‘If graffiti changed anything — it would be illegal’ reads Banksy’s mural in Fitzrovia, London. Underneath the crimson writing perches a rat. His paw is mischievously covered in paint. He sneakily looks around as if hoping not to be seen, ready to run away from the ‘crime scene’. To me, this mural represents the essence of Banksy’s work: the necessity of awakening others through rebellion. Indeed, the artist often proclaims his messages through raw, satirical images that speak directly to the modern human conscience and attack its main rivals: the establishment, conformism, war and consumerism.

A clear example of Banksy’s insurrectionary style is his piece against warfare, Crayon Boy, which depicts a child holding a machine gun. He stands in a field of colourful, child-like drawings of flowers, with an expression that is both confused and terrified. The dichotomy between the black and white of the boy’s aghast figure and his joyful surroundings is like a punch in the stomach. The imagery of idealised childhood in privileged, peaceful regions is juxtaposed with the crude reality of child soldiers. One detail is particularly thought-provoking: the weapon’s bullets are substituted with colourful crayons.

Banksy’s art often speaks through contrasts and addresses hot contemporary topics.  I Don’t Believe in Global Warming, for example, slowly sinks into the rising water of Regents Canal; What Are You Looking At? is spray-painted directly in front of a CCTV camera; his now-removed Brexit Mural shows a man removing a star from the European Union flag. Evidently, Banksy’s main objective is rebellion. For this reason he is often called a ‘guerrilla artist’. His focus on impending issues acts as an invitation for us to speak up, to take up the role of the rat from If Graffiti Changed Anything.

If Graffiti Changed Anything is in fact a homage to Emma Goldman, a women’s rights activist and anarchist, who said: ‘If voting changed anything, it would be illegal’. Anarchy is one of Banksy’s central themes, along with the use of rats as an allegory of the human race. Testament to this is Anarchy Rat/Peace Rat in Sloane Square, London. By depicting a rat wearing a peace-sign necklace and holding a poster with the Anarchic symbol of peaceful insurrection, Banksy here promotes independence of thought and the rejection of conformism – which, as If Graffiti Changed Anything also suggests, he considers key to revolutionising and improving our society.

The importance of independent, original thought is also shown by Banksy’s stimulating use of urban spaces and environments that encourage the viewer to re-imagine the world, to actively try to shape it as they please. See, for example, his Christmas Mural, where the street-artist uses a public bench in Birmingham to highlight the looming problem of escalating homelessness rates in Britain. Banksy’s manipulation of urban environments extends as far as his creation of ‘Dismaland’, a pop-up exhibition which mimicked the features of Disneyland, but was more ‘bemusement’ than amusement park; he defined it as a ‘family theme park unsuitable for children’.

The city itself is the protagonist in Banksy’s artworks: it seems as if the city is screaming its dissent at the viewer. It’s not coincidental, for instance, that his environmental graffiti Season’s Greetings is located in Port Talbot, Wales, one of the most polluted areas of the UK. The city walls now reflect the emotional tumult their inhabitants are going through. Banksy’s encomium to NHS staff in the time of Coronavirus (Game Changer) seems to be a companion piece to every community’s ‘clap for carers’ session held in recent months. His rats have landed in the London tube with surgical masks as parachutes, the carriage walls now encouraging citizens to protect themselves from Covid-19. His tribute to George Floyd and support of the Black Lives Matter movement depicts a photograph of a black figure laid on the ground, with flowers and a vigil candle placed beside it, as if the elements of the composition have been placed on the wall by mourners. The flame of the candle ignites a U.S. flag.

The value of Banksy’s work is in its influence on the viewer, whether it influences a person’s ideals or simply opens someone’s eyes to contemporary problems. His messages are harsh and sombre, made even more so by his chosen medium of street-art, which allows him to address the masses directly, using art as a form of public rebellion. Let us not forget Banksy’s rejection of the monetisation and elitism of the art world, announced scandalously with the shredding of his piece now known as Love is in the Bin after it was sold at an auction for $1.37 million.

Banksy’s art teaches us a most valuable lesson: the monumental impact that a single person can have on their whole community. His street-art proclaims the importance of small actions, of making our independent opinions heard, and of changing the world by not conforming to the status-quo.