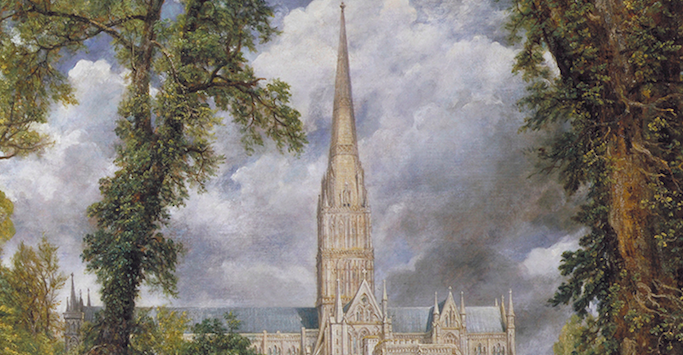 HARRIET LEIGH reviews Constable: The Making of a Master at The Victoria and Albert Museum.

Walking into ‘the making of a master’, one instantly feels the gravitas of such a renowned artist by the accompanying hush of silence. After a brief early history of John Constable, (1776 – 1887) including a self-portrait and a painting of his first home, we walk into an empty room whose entire back wall is taken up with projected video footage. While the V&A often resist mixing modern media with museum shows about ‘traditional’ painting, this move works. The projection shows a thread of still shots of all the scenes Constable painted: fields, lakes, Salisbury cathedral, London. The scenes are of one static object, but a subtle rustle of the leaves in the wind, or the ripple of the grass shows that this is, in fact, video footage. No sound accompanies these scenes, and the overall effect is one of enveloping peacefulness: an effective way of placing the visitor into the viewpoint of a painter, while also emphasising the importance of nature for Constable as his primary subject.

The exhibition consists of 10 rooms that demonstrate Constable’s influences as he developed his style. These were mainly the Old Masters; Raphael, Rubens and Claude Lorrain to name a few, and it is evident as one walks around the different rooms to see just how powerful their influence was on Constable. He was encouraged by Gainsborough to establish a dialogue between the Old Masters and the study of the natural world, and one leaves the exhibition feeling he succeeded in doing so. The first few rooms show paintings by his famous predecessors, followed by a Constable with comparable subject matter. A perfect, and beautiful, example can be seen in Rubens’ Landscape by Moonlight, set against Constable’s Moonlight Landscape with Hadleigh Church. Constable was ‘hugely impressed’ with the ‘magnificent Rubens’ and emanated his style and focus throughout his own oeuvre. Placed side-by-side, these works are easily compared, but also contrasted.

As the exhibition progresses, we too begin to see Constable’s progression as his sketches and studies are laid out for us to examine. To begin with we are confronted by the paintings he did en plein air, on canvas. These, in contrast to the golden ornate frames we are used to seeing in these traditional exhibitions, are placed in simple modern frames with sparse white backgrounds, contrasting sharply with the rough oil and saturated colours he used in his sketches.

There were two rooms dedicated entirely to other painters, including one which exhibited all the prints of paintings Constable collected over the years – prints being cheaper than actual paintings. While this highlights the influence of the Old Masters to Constable, what was more effective was seeing Constable’s actual progression as an artist, from those imitations shown in the first few rooms to the final masterpieces shown towards the end. We move from his original paper drawings, to larger painted sketches and finally to the finished work in all its grandeur.

The final room subverts the trend of the earlier rooms by showing how other painters have been influenced by Constable’s work. This demonstrates that while Constable greatly admired the Old Masters, perhaps he too could be counted among them.