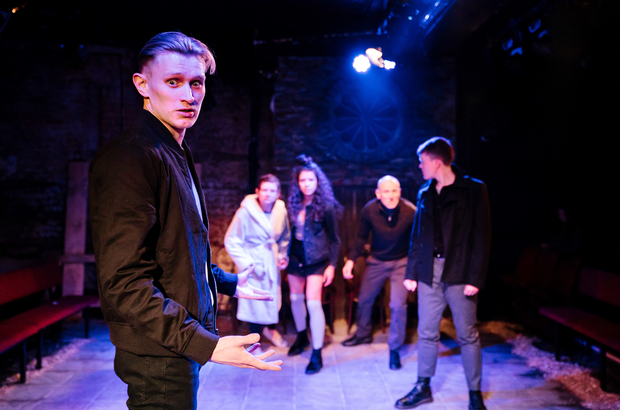 After forty-three years, Steven Berkoff’s East returns to the King’s Head Theatre, the home of its 1975 debut, and presents what is now a cultural relic. Berkoff paints the environment of his upbringing in this self-proclaimed ‘elegy to the East End’, indulging in the sordid and vulgar, mixing the extremes of sex and violence with the banalities of life in old East London. While capturing the East End of ‘energetic waste’ that is now a part of London’s cultural past rather than its increasingly gentrified present, the script exposes the anger and frustration of gender and class that is continuously and eternally pertinent. Atticist theatre stages East with all the boisterous uproar and sugar-coated charm it demands and deserves.

The play is a patchwork predominantly of monologues and anecdotes, in which the characters’ anxieties and the politics between them are brought into relief. Carol Arnopp’s piano accompaniment conjures the varying atmospheres with its jingly melodies, perfectly complementing the rambunctious farce of the spitting characters. Amongst the speeches are mimed sequences in which Jessica Lazar’s direction tightly constructs the action to extend the landscape and the tone established in the script. None of these are one-dimensional: the cast simultaneously create slapstick comedy and draw more out of the characters, for example in developing the relationship between Mike (James Craze) and Sylv (Boudicea Ricketts), and extracting the extent of Les’ feelings of neglect in the mimed cinema and fairground scenes.

Given the heavy proportion of monologue, it is to the actors’ credit that every scene is defined by a unique tone and style of physicality. Ricketts constructs a complex and very real sense of Sylv’s conflicting emotions of pleasure and resentment in her monologues. When describing his grubby workplace, Jack Condon cleverly embodies Les imitating his boss, scuttling around with his chair between his legs like a beetle – Les translates reality into the grotesque shade in which he sees the world.

The production is defined by its contrasts: the cockney slang framed by Shakespearean verse that characterises Berkoff’s writing; the tightly gritted facial expressions of rage or forced joy the actors break into is set deliberately against the fluidity of their physicality; the snappy flickers between juxtaposing tones are masterfully enacted. We see this most dramatically when Dad (Russel Barnett)’s dinner table nostalgia for Oswald Mosley climaxes in riotously destroying the meal and splattering some audience members with beans, before abruptly cutting himself off with an alert ‘What time is it?’ and ‘We’ve missed Crossroads!’ Barnett combines in Dad a threatening patriarchal supremacy as well as absurd confusion. Similarly, the sexual politics and complexities of the seduction scene navigate anger, romance and passion before Mike comes and immediately strides out in a single fluid movement, shockingly yet comically dropping a dismayed Sylv on the floor. The physical prowess of the actors is ubiquitous as they stride across the stage and around each other, tinting the brutality of their rage with a grace equal to that of the verse.

But despite such moments of sharp change, the tone is insistently raw and always with an edge of threat. The violence of the brutal language, stark physicality, and snarling of cockney edged insults is eased only by the just as pervasive comedy. The play dances around all taboos, with daringly explicit descriptions of ultra-violence; it explores sex from its most passionate, to its most disappointing and deviant manifestations, including incest and underage grooming. The shock of Les’ description of grooming a teenage girl is disturbingly lost in the sordid sea of the play, and is naturalised by the nonchalance of the delivery. The play forces its audience to acclimatise to its violence to the extent that Mike’s ‘Cunt Speech’ near the end of the play is hardly a surprise.

The relentlessly corrupt landscape however allows the production to achieve the careful balance between the touching and grotesque, making its audience equally disgusted by and sympathetic to its characters as their stories and characteristics are exposed. As Sylv imagines being a man and having the power to engage in the physical and sexual violence she sees and experiences, her excited indulgence in the fantasy turns to resentment and sorrow. Having seen Les neglected and rejected by the other characters, and admit his loneliness in spite of his hyper-masculine behaviour with Mike, it’s hard not to feel sympathy for him, and the audience is left conflicted as his solution to feeling such solitude is to find an underage girl. When he later asks Mike ‘Why don’t we chat up classy snatch?’ he shows a resentment of his class and lifestyle: ‘We do this to ourselves’. Debra Penny, together with the piano score, perfectly captures the tone of Mum’s glamorous and romanticised fantasies, nearly masking the fact that reality is a sordid cinema handjob. Drawing together the anxieties that lie below the crude comic surface of the play is Sylv’s concluding speech, eerily delivered and dripping with the anger and frustration that the characters hold common: ‘We will not end our days like this.’

East spits onto the stage the crude extreme of the old East End, while exposing the fundamentally human disquiet that is both cause and consequence of such raw energy. Atticus theatre neatly extracts every subtlety from the script and no moment is wasted. The audience is forced to constantly oscillate between sympathy and disgust for a set of characters who are ultimately, while essentially disgusting, made deeply sympathetic.