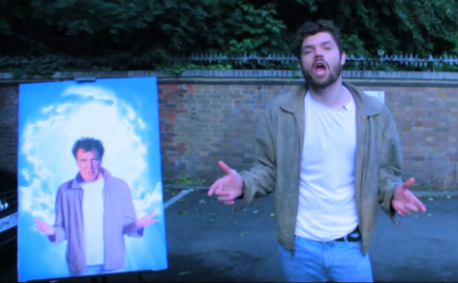 However, what may appear to be a disappointingly average night in Soho was in fact the spore of comedy duo Guilt and Shame’s wonderfully absurd new show, ‘Going Straight’.

With Jeremy Clarkson as their pseudo-God, Gabriel Bisset-Smith and Rob Cawsey are back at Soho Theatre with a show that is far superior to their previous endeavours in lunacy, insightfulness and balls (metaphorical and literally). The audience were always either laughing or beaming deliriously, waiting for the next gag. Pun not intended. Gabriel plays the man of men, whose best friend Rob is gay. While Gabe is desperately trying to cling to misogyny and beer Rob’s homosexuality is blamed for bringing a rift between them. The play’s end goal is, obviously, to expose the sheer ridiculousness of this opening precedent.

Hidden behind the raucous presentation lies an important message about sexuality and the language used to discuss it. In the early 00’s, variations of ‘that’s so gay’ claimed a place in teenage vocabulary, were mass circulated and used in a grossly derogatory way. When calling friends out on using it some will exasperatedly respond, ‘but, that’s not what I meeeeeaan’. Then don’t say it. Using this phrase perpetuates negative attitudes towards homosexual people. Going Straight implores its viewers to not contribute to this cycle of unnecessary daily discrimination, with wider implications. 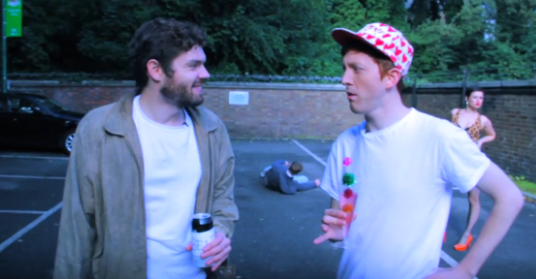 While delivering a serious message about the daily intolerance experienced by homosexuals, Going Straight manages to also be very, very funny. Bisset-Smith and Cawsey have a large portfolio of sarcasm and little desire for propriety. With these tools the comedy duo deliver a sharp theatrical and moral slap in the face, welcomed with laughter and a greater awareness.

A word of warning: don’t go with your parents, colleagues, or anybody who you think wouldn’t be able to laugh at you air-bumming them while somebody else is air-bumming you, and so on, ad-air-bumming-infinitem.