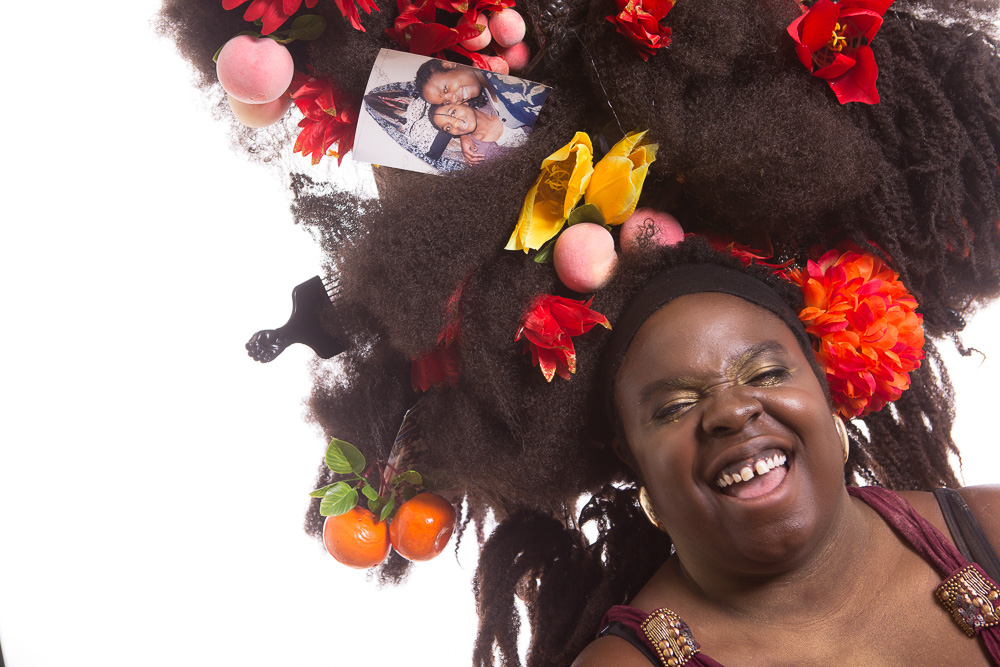 Type ‘beautiful hair’ into any search engine and you will find a colourful collage of long, straight and silky hair flowing from a sea of predominantly white faces. The odd black woman in the mix has hair that blends in with this aesthetic. A few curly manes make the results but hardly any images of afro hair come up, and when they do they almost always belong to biracial woman. If a picture paints a thousand words, these images send messages that have diverse and long-term psychological consequences for black women from childhood onwards. I was therefore curious to see how thoroughly ‘Dark and Lovely’—Selina Thompson’s one-woman show about the politics of afro hair—would portray them.

The play takes its name from Sofsheen and Carson’s famous hair relaxer, a chemical cream that some black women apply to their hair to straighten out its natural coils. It is estimated that black women contribute 80% of the revenue to Britain’s billion pound hair industry, and hair is the primary supporting character in this production. Throughout the show Selina makes several hair changes, and her set essentially comprises of a gigantic wig—dubbed the ‘Tumbleweave’—made up of discarded braid extensions and hot combs, with a couple of windows and an open roof.

Much of the ‘Dark and Lovely’ interrogates the latter half of the show’s title. It questions what ‘lovely’ hair looks like, black women’s pursuit of ‘loveliness’, and the impact of realising then mentally reckoning with the racism of society’s ‘lovely’. Perhaps most significantly, it looks at the lovely aspects of having natural hair that are all too often dismissed, erased and misunderstood. Hair is a symbol for attractiveness, so by interrogating the politics of hair, Selina interrogates the whole politics of desirability.

Early in the show, Selina dons a long blond wig to deliver a satirical and damning monologue about popular culture’s glorification of blond hair, a metonym for whiteness. One of the show’s many strengths is that it tenaciously grapples with the unsaid thoughts, resentments and feelings black women harbour towards their own hair and the hair of white women. Non-black women of colour are also implicated in the politics of black hair, since it is their hair from which most human-hair weaves are made. Though it would have been interesting to see Selina dwell on this fact more, the unabashed way in which she confronts whiteness and internalised racism within the black community commendably makes up for it. These juggernauts are tackled with candour and versatility, and she never comes across as heavy-handed.

The theatricality of this show is borne of sisterhood and communal bonding. Selina makes the audience drinks, inviting us to join her and sit down inside the Tumbleweave while an audience member styles her hair. Candy is passed around as she tells us about her memories as a child, the natural hair journey that began in her adolescence, and the observations women told her while she was researching for the production. She even tells us about some of her more memorable past audience members, including us in the ceremonial, intimate and familial world of black hairdressing. Most of the time Selina is being herself, and her affability really shines through while she is getting her hair done, all the while telling us about some of the good, the bad and the ugly of black hair.

Sound is used sparingly but to impressive effect. In one early monologue, Selina tells us about the anger she experienced researching the show. In the background is the grating sound of blow driers and combs yanking through afro hair. It is an impassioned moment that captures the anger and helplessness that one often feels when contemplating the absurdity of racism.

Selina invokes the image of a child in the play’s most vulnerable moments. Referencing Toni Morrison’s debut novel ‘The Bluest Eye’ about a young, abused black girl called Pecola Breedlove who longs to have blue eyes, Selina ponders how much of Pecola there is in all black women, even those like herself that have begun the process of decolonising their minds and embracing their natural hair. She ends by telling the audience a story she wishes someone had told her as a child. It is a forward-thinking and moving conclusion to the production, calling us to (in the words of Chimamanda Ngozi Adichie) ‘do better’ with black children.

‘Dark and Lovely’ is an inclusive, funny, sensitive and meditative piece of theatre. It is both a celebration of natural hair and a plea for self-care in the face of ubiquitous homogenised white beauty standards. All in all it is a beautiful experience not to be missed.

‘Dark and Lovely’ is playing at Ovalhouse until 17th October. Visit http://www.ovalhouse.com/whatson/detail/dark-and-lovely-by-selina-thompson for more information.