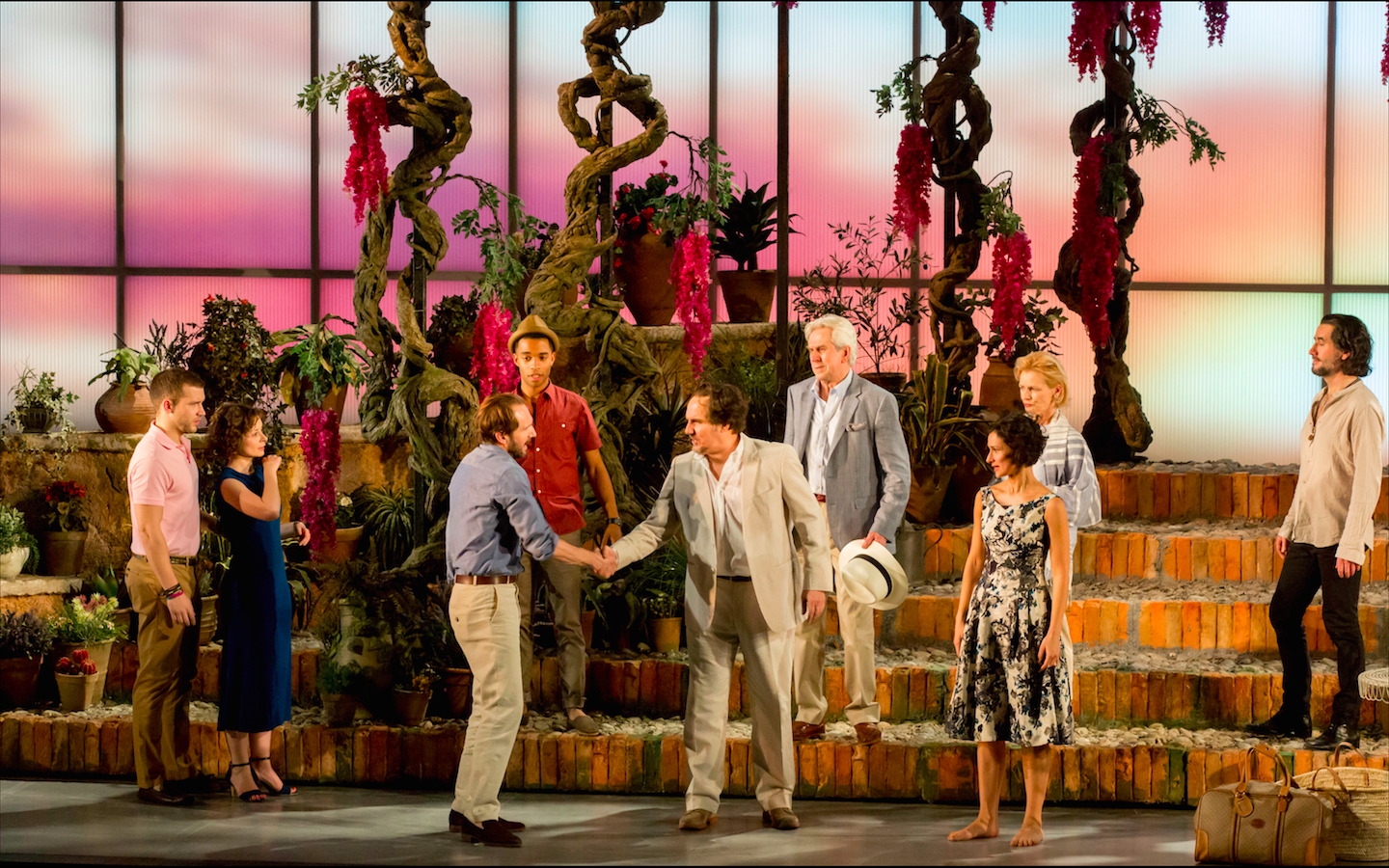 NANCY HEATH reviews ‘Man and Superman’ at the National Theatre.

Simon Godwin’s production of George Bernard Shaw’s century-old ‘Man and Superman’ has exploded into life on the Lyttelton Stage at the National Theatre, bringing this story to audiences in its rarely seen, four act version. When performed, this play is usually robbed of its third act due to the controversially hellish nature of the fifty minute scene and its general incongruence with the rest of the two and a half hours of the production. Previously, this act has been perceived as disjunctive with the play’s tone, being omitted to reduce the duration of performance.

If the play was performed in its entirety it would slip past the four-hour mark – audiences at the National would be justified in expecting a second interval! To avoid this, Godwin makes sensible cuts and edits which are hardly noticeable even to avid Bernard Shaw fans. Thus, with a structure remaining largely unaltered, the play’s protagonist becomes one of the largest stage roles in history.

The formidable BAFTA winner Ralph Fiennes, of Harry Potter fame, takes on the quixotic John Tanner—“Member of the Idle Rich Class”—who darts onto the stage and is rarely absent from it for the whole performance. The energy that Fiennes manages to uphold is remarkable, as is his comic timing which is reminiscent of his recent role as M. Gustave in ‘The Grand Budapest Hotel’.

The original subtitle tells us this is “A Comedy and a Philosophy”. The first, second and fourth acts focus on the love life of the Revolutionary upper class Tanner, a distant descendant of Don Juan. It’s a comedy of manners with hints of Wilde’s ‘Importance of Being Earnest’, interspersed with heavy suggestions of ‘Much Ado About Nothing’, a Shakespearian-pastiche. In stark contrast, the third act—often called ‘Don Juan in Hell’—is a far more philosophical, dream-sequence in which Fiennes plays the role of his notorious ancestor. The underlying classical afterlife debate is recognisable to audiences, with more witty one-liners from Lucifer than Milton led us to believe was capable.
Bernard Shaw’s title is intriguing: he took the term ‘superman’— long before DC’s hero — from Fredrick Nietzsche’s idea of an “Übermensch” which is clearly suggestive of the philosophical and political Nietzschian undertones of the play. The political debates fluctuate from a good-natured spiff between Tanner and his driver “‘Enry” Straker (Elliot Barnes-Worrell) deciding how fast to go, to a dialogue with the Devil where Heaven and Hell hang in the balance. 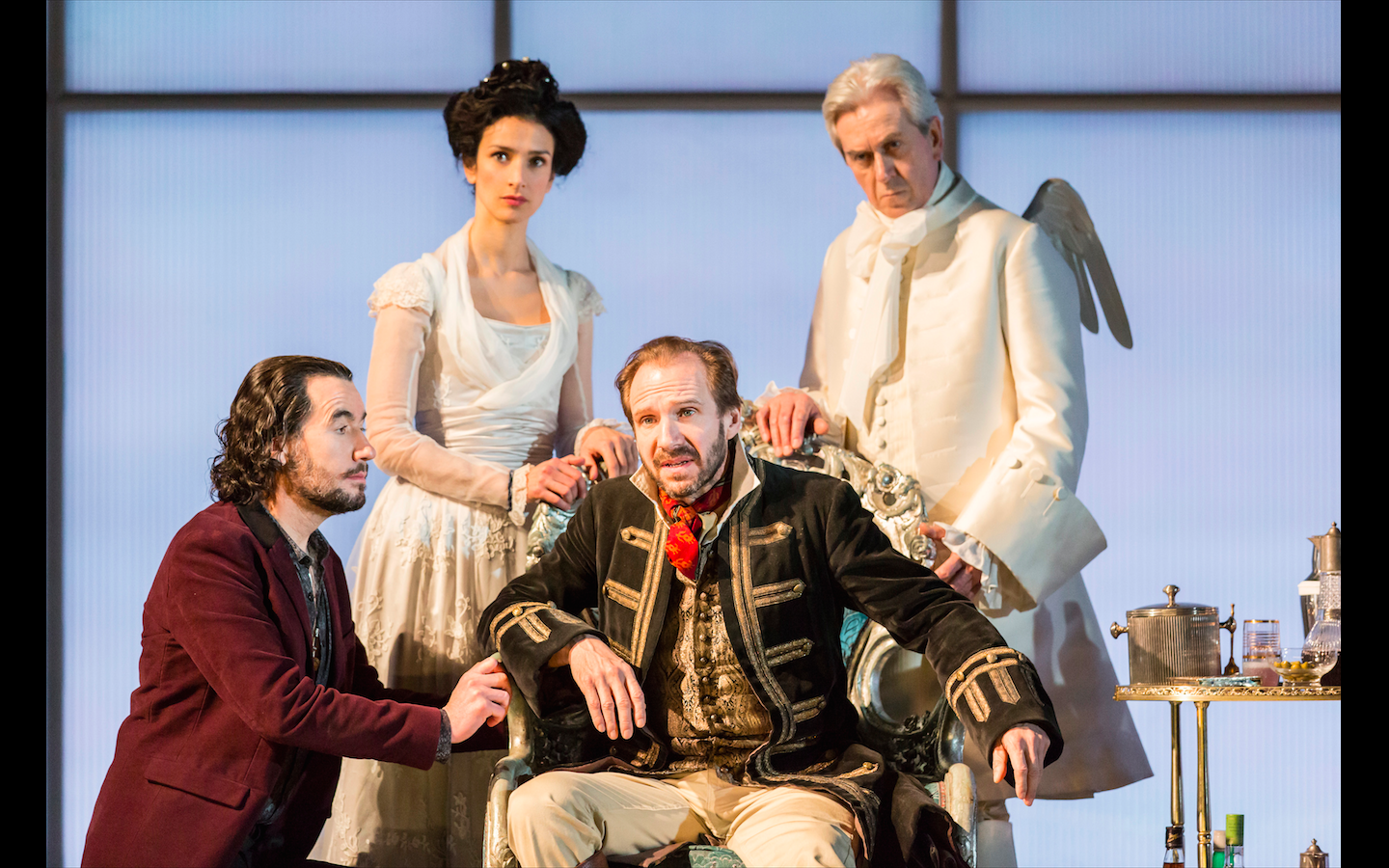 The sheer scale of this performance lends itself to large staging, which the National has in plentiful supply. The sets and scenes are immense, more like what you would expect from the vaster Olivier Theatre next door at the National. The Lyttelton Theatre, seating 890, still manages to show the epic scale of this play whilst containing it within the space. This works well, mirroring how the large ideas of morality and mortality are squashed into the everyday life, like a lovers’ spat in the drawing room.

Overarching themes running through the play overcome the clash between the comic and the philosophical, linking the two together with ideas of morality, sin, and the tempter—or in this instance the temptresses Ann (Indira Varma). This was subtly reinforced by Tanner’s casual quoting, and mocking, of Dr Faustus, which prevailed through the first comic act and only really slowed when audiences were taken onto Lucifer’s own turf. Perhaps there is some truth in the taboo. You know the old idiom, speak of the devil…
One of the most notable things about this production is the intense modernity of a play written over a hundred years ago. This could easily be a satire of today’s society with ideas of relationships, inheritance, gender roles, morality, politics, and class which are wholly relatable to current audiences.

The cast worked well with the fast pace of the script, helping to keep audiences up to speed. The scene in hell did perhaps start to suffer slightly from being overly drawn out, but was held up by brilliant performances from Tim McMullan, playing the Devil, and from Don Juan’s Ana—Ann reincarnated. Indira Varma’s performance in this role, and in Ann’s, was impeccable throughout, adding realism to the cunning and sometimes unsympathetic character. She is far more than a love interest, again betraying the modern outlook of this production.

At its first 1905 outing, Shaw’s play was seen as too forward-thinking. Yet today, despite it still managing to raise eyebrows, it also elicits raucous laughter. We recognise the society painted by the intensity of performance, but it is distant enough that we feel able to see its inconsistencies and faults without feeling uncomfortable. Perhaps now, in the twenty-first century, it is the perfect time for this play’s great revival. Godwin seems to have cracked the code to immensely powerful introspection coupled with comedy. A thought-provoking and thoroughly earnest production of a great twentieth century play.

‘Man and Superman’ is showing at the National Theatre until May 17th. For tickets and more information click here.