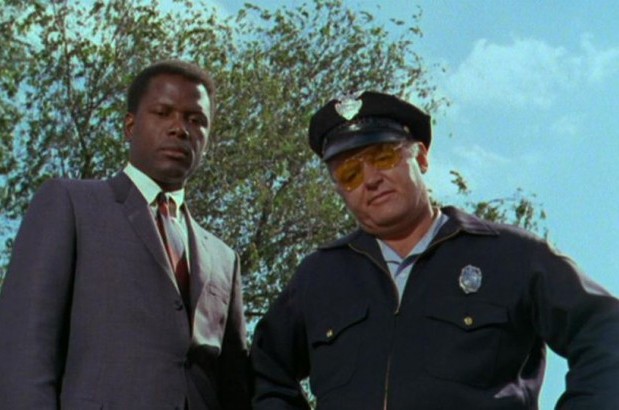 CALVIN LAW discusses how the 1967 film In The Heat of the Night confronts racial prejudice in a subtle yet impactful manner.

The ethnic diversity of Hollywood actors and directors is growing. Although the #oscarssowhite controversy (where for the second year running the Oscar best actor/actress nominees were all white) highlights how much more needs to be done to create roles that adequately reflect the diverse American population, the outcry this provoked demonstrates that while the Oscar board might not consider this a key issue, audiences and actors resoundingly do.  This is visible in the increased number of films that address race issues directly; it is no longer an elephant in the room, but rather a foregrounded necessity that warrants explicit and extensive discussion.

Sometimes, however, the way in which race issues are addressed can overshadow other artistic concerns. 2006 Best Picture winner Crash has an important message to convey, but frankly it would have worked far better as a documentary about racial issues in Los Angeles. As it stands it feels paper-thin and insensitive: its heavy-handed screenplay makes each character a racial caricature, and the overwrought direction and performances makes its central conflicts of racial prejudice ring false. A more nuanced, naturalistic approach would have permitted the film to do justice to the material.

In the Heat of the Night is a film that avoids the trap of being overbearing. The 1967 Academy Awards Best Picture winner is a terrific mystery thriller directed by Norman Jewison, who mastered an effortless and hard-hitting artistic approach to a serious and solemn subject matter. The storyline itself is remarkably simple: it centres around the murder of a wealthy industrialist in a small Mississippi town that brings together the prejudiced, old-fashioned Police Chief Bill Gillespie (Rod Steiger) and a young African-American named Virgil Tibbs (Sidney Poitier). The latter is arrested for the murder when found innocently waiting for a change of trains. Upon revealing that he is Detective Lieutenant of the Philadelphia Police Department, Tibbs is put on the murder case with Gillespie, much to Gillespie’s ire.

The film’s exploration of race relations is all the more impactful because it does not point every ounce of dialogue towards the intended message. In The Heat of the Night deals first with Tibbs and Gillespie’s professional differences, with much of their head-butting due to incompatible approaches to murder investigations. The clashes are not simplified into ‘racist Southern gentleman versus angry black man’; there is substance to their initial relationship beyond the colour of Tibbs’ skin. The racial animosity comes through when the stakes are raised and emotions running high, but even then it is not upfront. Gillespie’s racism is presented as cultural indoctrination, a by-product of his deep Southern roots. He cannot bear the thought of taking advice from a black detective, partly because he is simply unaccustomed to it. Tibbs, conversely, takes a naturally paranoid stance to many of the townsfolk. Poitier powerfully portrays an ingrained sense of Tibbs’ self-defensiveness created by frequently feeling out of place.

The predicament of a black man in the police profession in America’s Deep South is not only used to illustrate the zeitgeist of the 1960s, but also to strengthen the plot. His self-awareness of being a minority leads to one of his few flaws as a character. During the investigation, he is almost too quick to pin Eric Endicott (Larry Gates), a racist plantation owner who was at odds with the victim, as the most likely culprit. Issues around race are here brought to light subconsciously, leading to the iconic scene in which Tibbs stands up and retaliates Endicott’s verbal and physical assault. Director Jewison treads the water so carefully that the plot seems to emerge organically from confrontations of racial prejudice.

Having resoundingly passed the test of time, In the Heat of the Night remains the epitome of filmmaking about racial prejudice. Quentin Tarantino’s latest release, The Hateful Eight, is strongly reminiscent of the 1967 film. Similar to Jewison, Tarantino deals insightfully with racial issues in a way that does not engulf the plot. Instead, he manipulates the characters’ antagonism and the growth of their respect for one another, bringing the film to an exceptionally moving conclusion. Directors such as Jewison and Tarantino use film as a medium to illustrate the absurdity of racial boundaries. Gillespie and Tibbs, two men of different skin colour and carrying different cultural baggage from opposite ends of America, will inevitably clash. But as the film progresses, they gradually begin to acknowledge the social pressures that separate them. After cracking the murder case together, they were able to part as friends. Within this complex camaraderie lies a very simple message: race is a natural result of human heredity, but the boundaries it creates are social constructs.