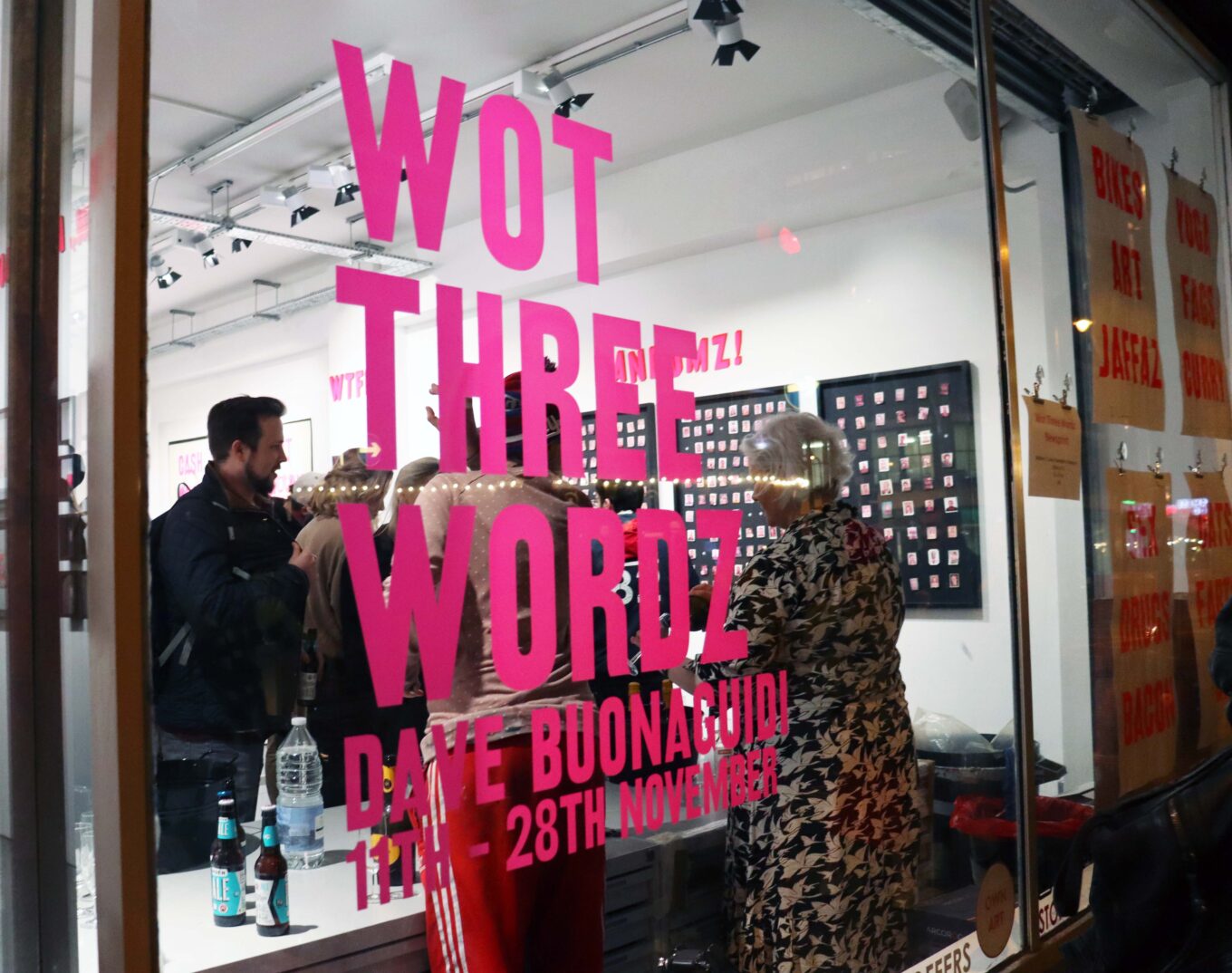 WILL FERREIRA DYKE speaks with Hackney based artist DAVE BONAGUIDI (aka Real Hackney Dave) at the opening of his show WOT THREE WORDZ at Jealous Gallery East. WOT THREE WORDZ exhibited in November 2021 in Jealous East, Shoreditch, and was a provocative collaborative exhibition between artist and audience. The show explored the textual relationship between three human vices: passions, guilty pleasures and favourite foods and drinks. The playful combination of words was randomised by the artist’s bespoke fruit machine, and was then printed on a polaroid of the audience member in fluorescent pink. The pair discuss the origins of the project, the influence of Dave’s professional career in advertising, and his recognisable fluro pink text works.

Hi Dave! How are you feeling about tonight’s opening at Jealous East?

I’m extraordinarily stressed, but massively excited! Firstly, it’s nice to have a show. Secondly, it’s great to have a show at Jealous, because they are always good fun. Additionally, the whole nature of this show is interactive so I’m excited for people to turn up and play.

Could you talk me through the origins of the project?

I used to work in advertising. The obsession there was how do you make people engage with your work. When it’s a brand, advertisements aren’t trying to provide you a laugh or make you feel better, they are always trying to flog you something. The ambition in this show was to create something which had an emotional hook in some way. I’ve always felt, especially at Christmas, you see all these stocky ads, trying to make you cry or feel something. It’s bullshit!

Yeah, totally. They all look the same. I’ve always been interested in how one engages the mind, because the brain is an amazing thing. This probably sounds very old fashioned, but I was thinking a lot about the concept of the Dance of the Seven Veils –  a performance in which a woman dances in veils, who you never see nude, but the mind imagines it so. It is your imagination which plays a role in your enjoyment of this act. I wanted to do something that was interactive to evoke this joy. WOT THREE WORDZ is a celebration of people being able to come out and enjoy themselves. I wanted people to get their picture taken and have three words chosen for them by the machine. I have no control over it. There is something weird about the way that the mind works, that it is always trying to make sense of everything.

How did you decide on the words to include in the fruit machine? Are any of these vices personal to you?

It took me a while to work it out. But the concept of having passions, guilty pleasures, and then something stupid like food and drink seemed to work well. You needed to have stuff that brought a certain feeling, a certain humour and flavour. Without sounding too pretentious, it reminded me how David Bowie used to write lyrics. He would take sections and words, cut them all up to the point where they wouldn’t make any sense. There is an almost musical rhythm that goes with three words. For example, ‘ART. BDSM. BACON’. It doesn’t really mean anything, but the combination seems to make perfect sense.

I also feel like there’s a bit of satire, in the words and their relationship with each other.

For sure. I wanted to make sure that they were all different. Once I bought the machine and knew that there were twenty words on each wheel, and therefore eight-thousand-and-something possible combinations, it was just a matter of adjusting them, ensuring there was this rhythm. It took a bit of time to get ready, but again, I worked in advertising for a long time and was very used to that discipline of testing your work.

How has working in advertisement impacted your visual vocabulary? How did you land upon your distinctive graphic style?

I operate in the world of ‘minimal words, big pictures’. I aim to create points of communication with a purpose. One of my issues is that art can be very passive; artists create nice things that require you to think ‘Oh yes, I really like seascapes or city-scapes’  to register your enjoyment of the work. I love getting instant reactions out of people. That’s obviously driven by my background, where you had to try and fill a constant brief. It’s a bit like if you’ve been in the army for thirty-five years you make your bed every morning. In advertising, I’d say to my clients these are the fonts, the colours you use, and if stray away from this language you’re fucking up. When you apply that to your own work, it becomes a lot easier to know how to make a work instantly and recognisably yours.

What made you choose that recognisable fluro pink shade that you have utilised in your previous works: sculptural bombs, bodybuilders, and now polaroid’s?

You know what, it took me a while to figure out. I can remember working on this shoot with a woman and her son who had written a little note on this piece of paper which said ‘run, look, play, see’. I just thought there is something interesting about that combination of words, because it doesn’t make any sense. Yet, that was the note he sent her off on her trip with – there was something feral about that. I then printed those words over a map in pink and red. Granted it was printed very badly, but I loved the way that the pink worked on the map. The paint is thin so you can see through it, and it just sat really nicely. Then came this obsession of mine of recycling things and finding multiples. Maps, for instance, are unbelievably emotional objects. You put a map on the table, and everyone is drawn to it. But the pink. I don’t know. Perhaps that was driven by the 70s and the Sex Pistols. Also, its advertising: if you want people to see it make it fucking pink!

Are there any distinctive references or artists which have inspired this project? My mind goes to Andy Warhol.

Indeed, Warhol’s polaroids have hugely impacted this project. When I worked in advertising, we used what we called the ‘Oasis Model’. Creators are always obsessed with trying to do something original, which is very difficult because the world is very old and a lot of shit has already been done. And so, I do this thing which includes a little bit of something you know, a little bit of something you don’t and you wrap it all up in personality. So, Oasis. They sound like the Beatles, no getting away from that. Your mum would like Oasis, your children would like Oasis. But they deliver themselves with this amazing personality, quite Sex Pistols-y, angry, with somewhat ‘yobbish’ mannerisms. It must be said that I’m certainly not comparing myself to Oasis, only that you can apply this formula to your work in the same way. My work resonates with pop arts like Rauschenberg, Lichtenstein – I love the graphic, simple stuff. And then my thing is pink, which makes it fun. It’s weird – you go out onto the street and everyone is driving black or grey cars… I just think ‘what is going on?’

Please tell me you have a pink fluro car!

I’ve got a big green pick-up truck with pink all over.

What are your plans going forward?

In a couple of weeks I’m printing in a motorbike shed with the club I’m a part of. I’ve built a rigg which fits on the back of my bike which can pull a screen print with it – it is the stupid stuff that I love. See, the thing I love in advertising is that you’d come up with a hundred ideas and throw away ninety nine of them, and the one you’d make would be vanilla. It would be the most bullshit idea. Now I come up with a hundred ideas, and get to make two hundred because every idea I come up with, I then come up with more. Now I’ve got a blackboard studio where I write down everything, and then work out what to do next. You know, I’m kind of getting into the idea of NFT’s, though I don’t really know what it’s all about.

I can’t offer you any advice there, my knowledge on NFTs is greatly limited! My final question. If you had an ulimited budget and resources, what would be your dream project?

My big thing is, why are all these rich men obsessed with the idea of living on mars? Why not build a massive machine that sorts out global warming? Imagine if clouds were pink, that would be cool! If they asked me to put my type on this machine and we made fluro clouds, that would do me. Wouldn’t you want to be the most famous man in the world for fixing our planet and the polar bears?

Pink polar bears and pink clouds sound great to me. If it gets me a Nobel prize, or my ex wife off my back I’ll be even happier *sips raspberry mojito*.

Oh, you’re so on brand. Cheers with pink drink!