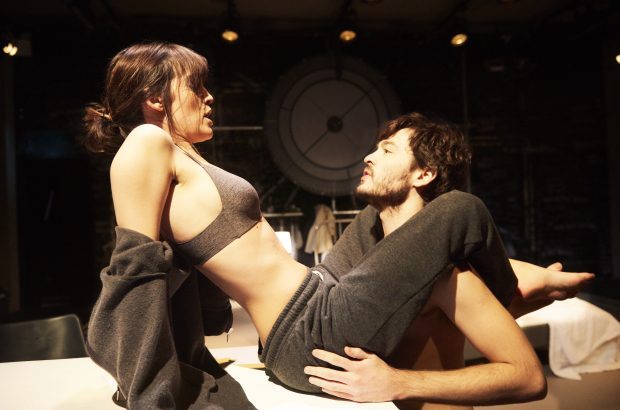 Max Gill’s new adaptation of La Ronde poses a difficulty to review due to the random selection of actors to play each role prior to each of the production’s 10 scenes, resulting in a varied performance each night. The slogan on The Bunker’s website doesn’t shed much light on what is about to be experienced either: ‘How does your desire define you?’ The Bunker, a new theatre ‘housed in a former underground parking garage’, is the perfect venue for this production with its intimate arrangement of the audience in the space: the audience are sat on three sides of the square stage, offered an array of different views. There’s something stimulating about descending into the dark, exclusive underground to view such a risqué production.

The premise of Gill’s La Ronde is quite simple: the original play, written by Arthur Schnitzler in 1897, is comprised of 10 scenes, each a power battle between a man and a woman; Gill takes this template, and uses a giant Wheel of Fortune to select the actors (there are 4 in all) to play out each scene. Not only does this create an added element of uncertainty, and even spontaneity, but the selections can also result in same-sex exchanges not seen in the 1897 text.

This aleatory set-up is a bold attempt at the reflection of the randomness present in everyday life and relationships, yet while Gill must be praised for the originality of this adaptation, it doesn’t feel completely appropriate in the theatre. The lack of a distracting spinning wheel between every scene is certainly a point in favour of most other plays. Whilst the wheel is turning, the audience hears ‘a verbatim testimony … collected from inhabitants of the city in 2016′. These are particularly juicy expositions of sexual encounters experienced by Londoners, which seem well chosen to further what seems to underly Gill’s message: that we are defined and controlled by our sexual desires. In fact everything we do seems to be a cover for and an example of our sexual fantasies and conceptions of power. There are both more and less convincing portrayals of this central idea in the production.

Perhaps the most heartfelt moment of the night is when a patient and professor (Alex Vlahos) asks his doctor (Lauren Samuels) ‘Can I hug you?’; he has just been told of a cancer growing in his spine. The relief in Vlahos’ heaving shoulders and Samuels’ look of surprise at the sudden moment of affection felt very real, more so than the kisses or sexual stances in other scenes. A few minutes later the patient is feeling another hug so simply steps forward and embraces the doctor. This seems to perfectly encapsulate the hesitancy towards connection with other human beings, decried by authors such as E. M Forster since at least the early 20th century, over one hundred years ago, yet clinging on still in our own society. The patient and doctor proceed to a sensual kiss, at which point the lights drop momentarily to imply that sexual intercourse is occurring. Perhaps we should all throw off our medical attire, old musky professor’s clothes, cleaner’s apron, or whatever it may be, and submit to our craving for human flesh. Is this what Gill is saying?

On the other shoulder is a voice suggesting that this apparently primal sexual instinct is nonetheless structured by acting and pretence: there is a constant discomfort, not from the taboo events occurring onstage themselves, but from the difficulty of telling at which points the actors are themselves putting on an act within the play-world itself. This also holds to account the audience’s gaze: it’s difficult to have much conviction in criticising a woman’s exploitative demands that a prostitute pour beans down her throat whilst ogling his naked torso, if we are also enjoying the spectacle. As to these two interpretations — that our sexual encounters are either a stripping away or an example of our everyday performances — they are left unresolved. This is the main strength of  Gill’s production and the spontaneity of its encounters: it maintains a balance between plan and impulse, real and imagined, believability and incredulity.

The production does not, of course, answer its initial question, ‘How does your desire define you?’ Part of the reason for this may be because desire doesn’t always define us. After all, we refrain from spontaneously snogging a doctor or kneeling down, moaning, in front of a cleaner for them to spank us. Perhaps this is because society controls our desires, or perhaps because we simply don’t want those things. La Ronde is most interesting in the questions it raises and then leaves you pondering in the moments after you’ve enjoyed your jazz and whiskey and walked out of the repurposed underground parking garage.