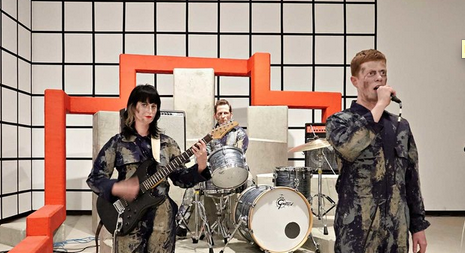 Confusion was the central theme of my trip to Mirror City. Confusion from the start as, I’m embarrassed to admit, I traipsed around the South Bank centre (City Mapper at the ready) struggling to locate the actual entrance to the Hayward gallery. This was simply a taster for the confusion which awaited me inside the exhibition itself.

Mirror City sells itself as a group of artists ‘exploring the effects of the digital revolution on modern day life’ and  the ‘space between fiction and reality’ that it creates. But, strolling around the exhibition, it seemed unclear to me how the pieces addressed this question, or even what the message of their work was at all. The exhibition felt maze-like with endless little rooms but had no clear route to follow, while each piece seemed entirely unrelated to the next.

The first piece I saw was a slightly unsettling film by Ursula Mayer. It was difficult to follow with no clear sequence: images of forlorn faces jumped around the screen against a background of sinister noises and crackled voices. A repetitive, robotic voice chanted “love, madness, love, madness…” This piece certainly created an eerie effect. But how Mayer’s work explored effects of the digital revolution was a mystery to me.

A piece which attracted a lot of attention was a performance by Nicola Conibere. Here, a man and woman moved silently around the floor their bodies intertwined. Their faces were barely visible; the figures dehumanised, reduced to dismembered body parts. There was something quite hypnotising about watching the smoothness with which their bodies rotated, constantly forming different shapes. Yet once again I couldn’t help but question the meaning behind this piece and its relevance to the theme of the exhibition.

But exploring the exhibition further, I began to feel that perhaps the pieces were not supposed to posses a clear meaning. That maybe the sense of confusion and disorientation which they evoke in the viewer was in fact the common link – memetic of the disorientation of modern-day life, in which technology has blurred the lines between fiction and reality.

This was notable in John Stezaker’s cutout collages. Stezaker merges pictures together by cutting out sections from a photograph and replacing it with parts from another. This creates a sense of mystery and a somewhat disorientating effect. It reminded me of a dream in which realities are blurred and one person merges so easily into another. In other pieces, he cuts out a section but does not replace it, evoking the parts of a dream that are forgotten or the faces that are lost.

In general, Mirror City posed some interesting questions but provided little insight, failing to truly address the questions which it raised. My overriding response to the exhibition was a sense of disorientation. The only conclusion I could draw was that perhaps this was symbolic of an all too common reaction to the fast pace of change in new technology.