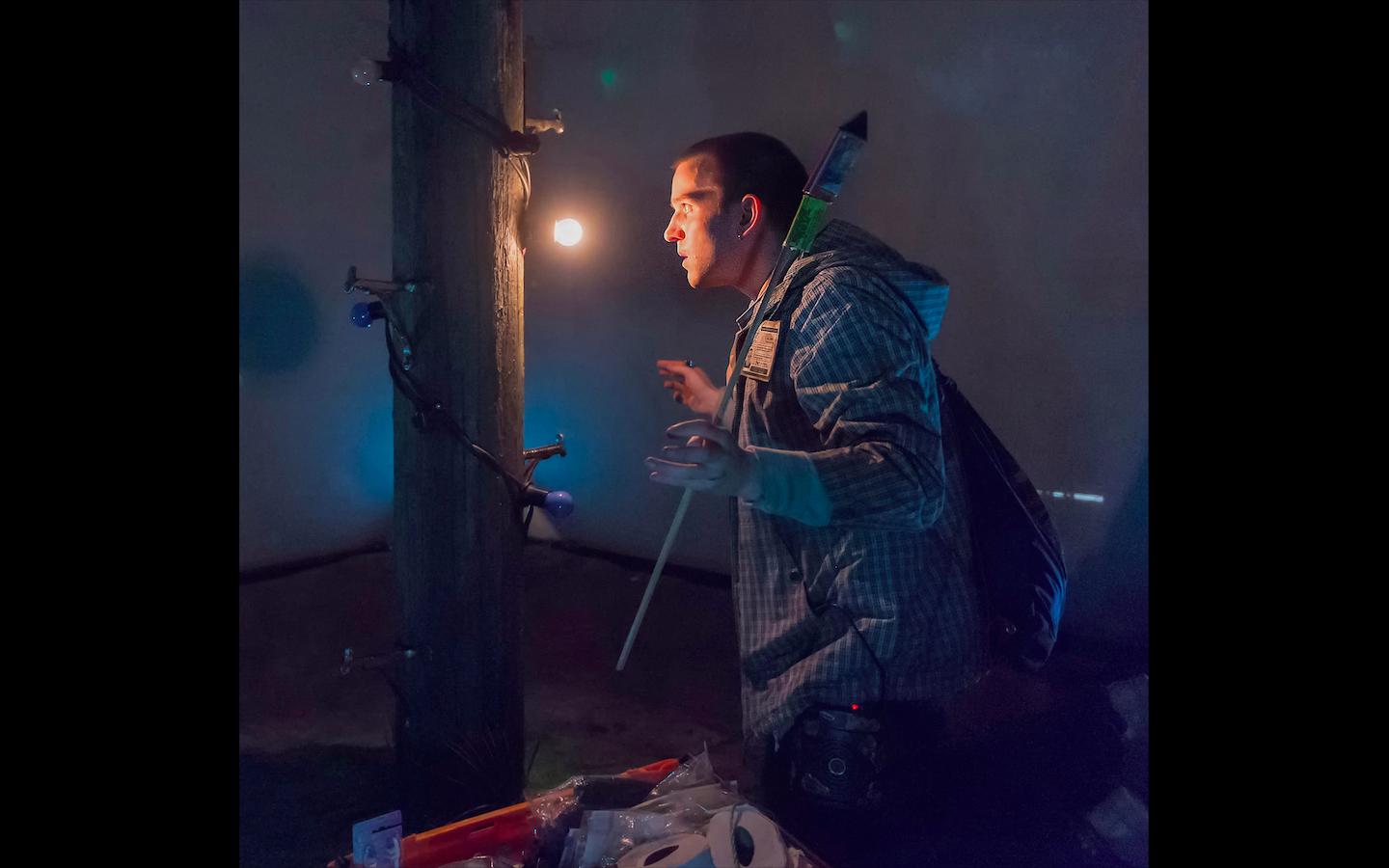 Harry Melling’s lyrical yet gritty one-man performance of his debut play, ‘Peddling’ shows a day in the life of a 19 year-old homeless man as he makes his way through London, selling household essentials to dismissive homeowners.

At every door, he is confronted with rejection and the futile nature of his task, as he tries to sell ‘toothpaste to already whitened teeth’ or a ‘dustpan and brush to those who’ve never had to clean up after themselves’. Melling’s dialogue has echoes of a spoken word performance and is interspersed with poignant allusions to and memories from childhood as we are reminded that the man we are presented with has a history beyond his immediate homelessness. 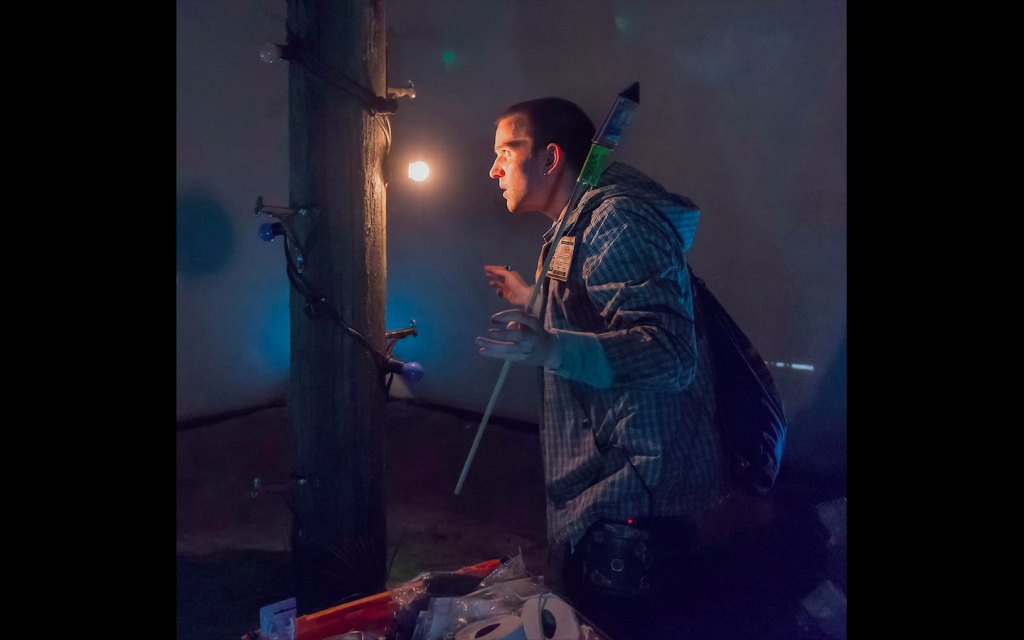 The Peddler relates his situation to common childhood experiences such as learning to swim or to ride a bike that he himself never had, highlighting the social inequalities that start from childhood: our society would never expect a non-swimmer to jump into a body of water and swim or force a child learn to ride a bike without stabilisers, but we would expect a teenager to embark on adult life without an adequate support structure. ‘Peddling’ makes its audience acknowledge that ‘problem’ children become troubled adults who from the age of 18 are easier to dismiss and have the potential to fall off the grid.

Staged in the round, Melling has our full attention and he roams from corner to corner of the set with palpable energy, covered in sweat and dirt. He relates the game of the city, as the Peddler plays chicken through the traffic, revealing his frustration at a world where people only acknowledge you in relation to the extent of how you have inconvenienced them or made them feel uncomfortable. 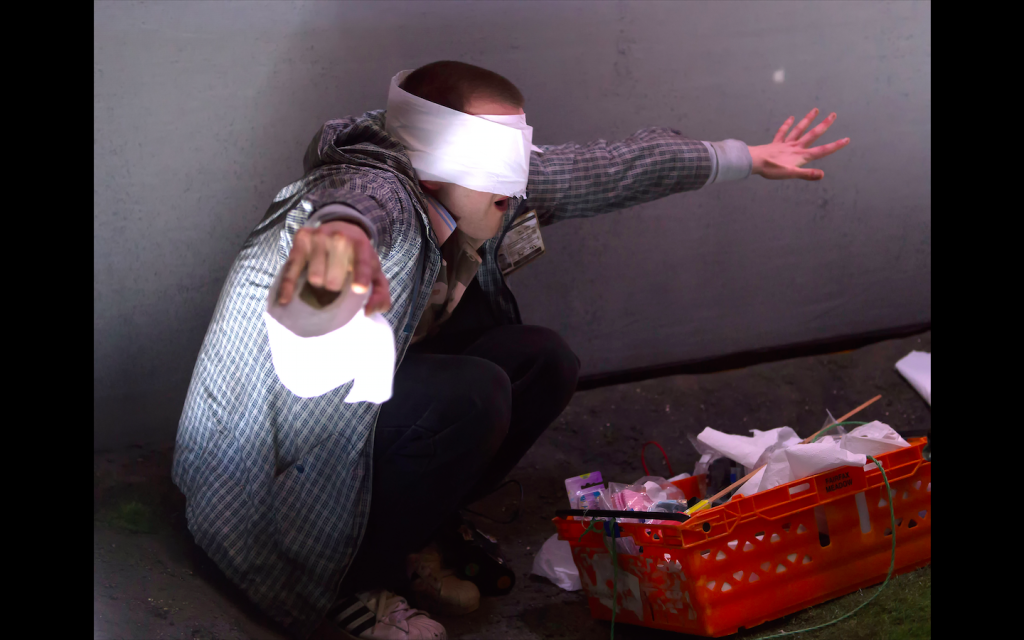 Although not overtly dogmatic, ‘Peddling’ walks the line of the political, as the Peddler presents his fake badge that identifies him as part of ‘Boris Johnson’s Young Reformers’ scheme at every house stop, in a performance that is both funny yet scathing. ‘Gotta tread carefully, little peddler boy’ he remarks, after he reveals his frustration of knocking on a number of empty houses of N2, speculating that they have been bought up by property tycoons and tax evaders, contributing to our city’s housing crisis.

As the play progresses, life becomes a series of closed doors, dimming light, and not-today-thank-yous. In his search for identity, the Peddler sees himself as part of the city’s architecture rather than its human population, a ‘concrete boy’ with a ‘concrete heart’. In his desperate desire to be noticed, the Peddler fixates on the symbol of the firework, its potential for brightness and to make an impression, however fleetingly, on its surroundings.

The play has similar moments of brightness, as the Peddler hopes for rebirth in his self-baptism in Hampstead Heath. However, these moments are also fleeting and are overtaken by the crushing realisation of his entrapment. Perhaps what ’Peddling’ most successfully illuminates is our privilege as the people behind the front doors with the power of refusal or even, as the Peddler states, ‘the arty people who want to make an installation of me’, as he stares pointedly at the audience.

‘Peddling’ is on at the Arcola theatre until 28th March, 2015. Further information can be found here: https://www.arcolatheatre.com/production/arcola/peddling