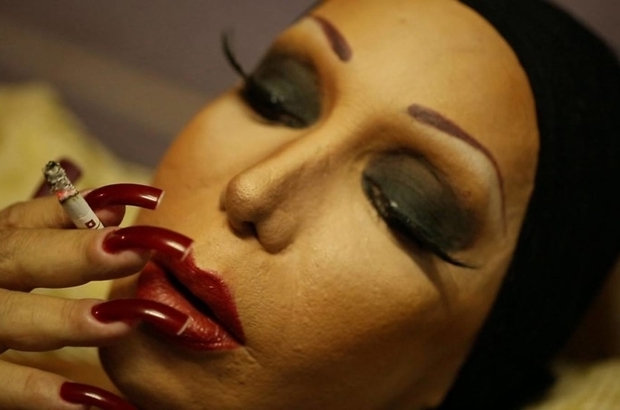 Originally intended as an abstract art project about the Rio de Janeiro Carnival, Evangelia Kranioti’s second feature film, Obscuro Barroco, surprisingly ended up with trans activist Luana Muniz, the ‘Queen of Lapa’, at its centre. Muniz died soon after the completion of the film, and Obscuro Barroco is both a tribute to her and her life’s work as well as a hypnotic, otherworldly work of art in its own right. Interviewed at the 2018 Berlinale where her film won the Teddy Award, Kranioti explained that she wanted to depict ‘the vertigo of transformation’ while imbuing her film with ‘magical realism’. The result is a very personal project for both Muniz and Kranioti, which itself mutated dramatically between conception and materialisation, catapulted by a chance encounter between the two women.

Muniz’s quest for identity is set in Rio, a city that itself undergoes a yearly transformation during the Carnival. Yet when the narrator ruminates that ‘no one steps in the same Rio twice’, she is referring not so much to Rio’s transformative potential as to our own ever-changing nature: we are all continuously in limbo, bound together by our self-constructed and malleable narratives. Kranioti uses transvestism to embody this idea, as transformation is relentlessly pushed to the limits of the human body. In the first scenes, Muniz says she reaches her reality ‘through dreams’. She is restrained by the body she was given which does not allow her true identity to fully manifest.

We get a first glance at Muniz’s hometown through the panoramic view of a cable car. The director peers in and through the cabin to create a surreal, juxtaposed reality. This also sets the premise of the film: we will discover Rio through the lens of Muniz’ identity. At night, Kranioti and Muniz are able to introduce us to their beloved city: we get to see a dirtier, rawer Rio than its sterilised Olympic version. We discover that the city-dwellers aren’t afraid of darkness, neither in themselves nor in their city: they’ve embraced it as an integral part of human nature.

Muniz takes us through the pulsating streets of Rio as she reads excerpts from Clarice Lispector’s self-meditative book, Agua Viva. We also follow a sleep-walking clown (portrayed by Fabian McCroskey) as he snakes through the dingy alleyways of the Brazilian capital, observing these alien festivities and reflecting on what they can teach him about himself. Muniz’s narration and McCroskey’s character weave an ethereal, dream-like veil through which we learn about Rio, the Carnival and the Olympics, as well as the political scene of Brazil.

As the Carnival scenes unfold, creativity and violence seem to come hand in hand, as if they are different expressions of the same energy. As fireworks break through the sky and pour light over the ocean, we are insidiously reminded of a battlefield: less spectacular but as overwhelmingly loud and close. Even the majestic floats, once abandoned, adopt a nightmarish and metaphysical quality. Brutal tension is palpable among the throngs of masqueraders pouring out in the streets of Rio – a fight could break out any minute.

Rio is a city of antitheses: while being home to the biggest festival celebrating diversity and transvestite pride, it is also tragically the country with the highest levels of hate crimes against transgender people, including murders and rapes. The film contrasts the magical realism that stems from transvestite transformation with its social and political significance in Brazil. It ultimately displays sexual liberation as an inevitable reality, fuelled by the same raw and human energy that elevates Rio during Carnival into an ecstatic celebration of expression. Luana’s concluding remarks however, and her untimely death, are less optimistic, as she ponders whether ‘la vie en rose’ will ever dawn on the transgender community. Can its members ever hope for a life safe from violence and discrimination?

Kranioti’s magnum opus portrays transvestite bodies with admiration and humility. Yet to some degree, it manages to elevate them to the realm of gods. A raw, unapologetic presentation of their bodies is superimposed with Muniz’ tragic presence and her unrelenting sight. In Obscuro Barroco, she transcends human boundaries so as to make us accept her death as simply one of ‘a series of rebirths’.

Obscuro Barroco will be screened on Thursday 15th November at the Genesis Cinema. Book tickets and learn more about the Fringe! Queer Film & Arts Festival here.