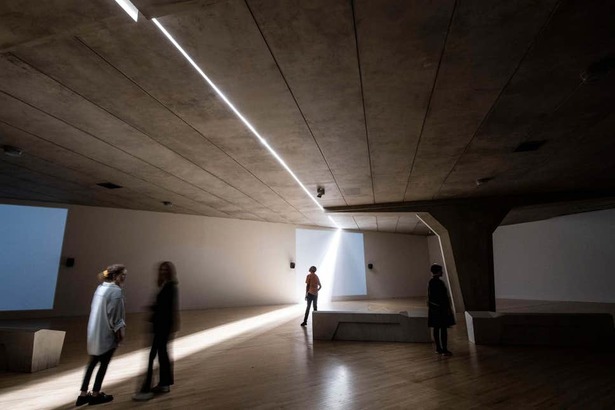 There’s something unsettling about seeing a motorway in stasis. They are meant for high-speed transit, for vehicles to enter and exit, for commutes to work, short trips and indefinite moves. They are in constant flux; they cause cities and towns to change and expand at an ever-rapid pace. Mark Leckey’s replica of the M53, installed across several galleries at Tate Britain, consciously contradicts this intended function of motorways. No journey can happen here; no one can enter or exit. There is a sense of stifling stillness that is conjured by this structure—one that reflects the emotions evoked through the three video works that are projected on the walls of this gallery space: Fiorucci Made Me Hardcore (1999), Dream English Kid, 1964-1999 AD (2015), and Leckey’s most recent work—specifically created for this exhibition—Under Under In (2019).

As spectators watch these video works (shown back-to-back in seamless succession) they utilise the space underneath the motorway in much the same way as Leckey did during his youth; they sit, slouch, and sprawl on the steep ramp, chatting idly amongst each other. A pillar is no longer used solely to prop the structure up; it provides support for those who stand to watch as fragments of Leckey’s young adulthood are projected onto the walls. There is a distinct phenomenological dimension to this work; the interplay between bodies and architecture, enclosed in the gallery walls, is integral. By viewing and engaging with the sculptural motorway replica and the ephemeral video works, the spectator is encouraged to consider the notion of boundaries: from architectural constructions, to the invisible (but equally perceivable) social and systematic structures.

O’ Magic Power of Bleakness is the first exhibition where all three of Leckey’s video works have been shown together. The most recent work, Under Under In, is projected in the gap between the top of the ramp and the underside of the motorway. The spectator is placed in a unique viewing position; one must look up, rather than ahead, to watch how the narrative unfolds. This work is distinctly different from Leckey’s previous works, which have an autobiographical slant; both Fiorucci Made Me Hardcore and Dream English Kid re-appropriate found clips of raves, Northern working-class youth, and personal footage from Leckey’s own life from the 1970s to the late 1990s. There are some elements of reconstruction, such as the squat that Leckey lived in when he first moved from the Wirral to London, but for the most part, the videos are rooted in real experiences. Under Under In is a re-enactment of a supposed supernatural happening from Leckey’s youth. The actors, who represent a young Leckey and his friends, act out the process of taking illicit drugs to induce hallucinations: mirages of curious fae that have the gang spellbound. Allusions to folklore and fairy-tales serve to emphasise the escapism that Leckey and his friends sought in their youth. In this piece, there is a pervasive sense of bittersweet nostalgia; of the need for distractions from the ‘real world’; and the disillusionment increasingly felt as one’s formative years progress.

I believe that the escapist tendencies of Leckey’s youth, conveyed through this installation, derive from the works’ site-specific liminality. Leckey is a Wirral-born artist, raised on the peninsula adjacent to Liverpool. He has expressed that, in his early years, he felt he was living in the shadow of Liverpool: an iconic, cultural landmark, with a rich musical and artistic history. The Wirral, by comparison, is hardly known about outside of Merseyside. Having spent the majority of my life living on the Wirral Peninsula, I have taken note of how people there localise themselves; we say we are ‘over the water’ or ‘across the Mersey’ from Liverpool. This installation is evocative of the personal and geographical borders and boundaries that sever the Wirral from the city. Behind the camera, Leckey assumes the role of an outsider looking in; a marginal figure whose sense of un-belonging permeates through the often frenzied and disjointed visuals.

Through marrying up video works created at different stages of his life, Leckey allows the spectators of this show to track his artistic—and personal—growth as it plays out on the walls. His life is charted in these works. We are able to follow his journey as he moves away from Wirral to Liverpool, and finally to London; from the monotony of day-to-day life, to the fast-paced ebb and flow of the city. All the while, we are avidly aware of the solid, unmoving structure that encloses us: the motorway with no destination. A dialogue is created in this space that carries a poignant message of growth and of grounding. There is a glamour, an intangible mirage, that surrounds high-paced, heavy-bass living. So that we may not be ensnared by its false appeal, the motorway stands as a physical presence to keep us sure-footed—lest we drift away.