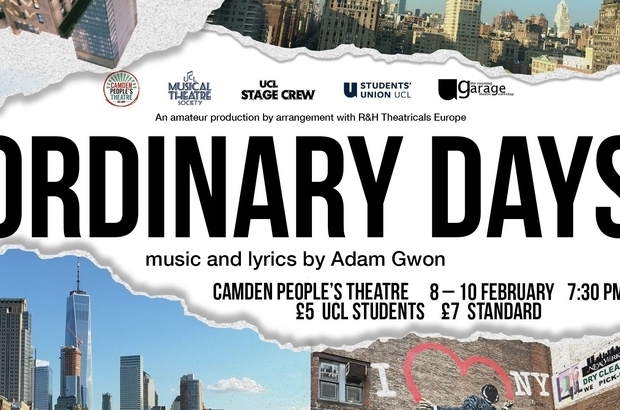 Ordinary Days, written by Adam Gwon, is a sung-through musical of four, interweaving vignettes of New Yorkers. Ranging from almost farcical humour to heart-breaking back stories, the show has a huge range of emotion and personality that would be a challenge to the most professional of casts.

This production in the intimate, black-box Camden People’s Theatre put a strong spotlight – often quite literally – on the four performers. With just two blocks for set, and only as many props as were necessary for the action, it was the actors’ characterisation and story-telling that carried the show. Dan Edge and Miranda Evans, playing Warren and Deb respectively, had particularly charismatic interpretations that created loveable and believable characters, and interacted energetically with each other. All of the actors were equally engaging and confident in their performances, each creating a character well defined enough to sweep the audience along despite the relative lack of action or showiness. The lighting was a key part of this, gently complementing the mood on stage without swamping the performances.

The balance between humour and sentimentality was very well maintained. Evans (Deb) had a subtle attention to physicality and tone that was highly comic and awarded her many hearty laughs from the audience. Cara Vaitilingam, playing Claire, provided the counterpoint of emotional weight, and her powerful and heartfelt solo ‘I’ll Be Here’ didn’t leave a dry eye in the house – normally an exaggeration, but in this case, when the lights went up I really couldn’t see anyone not hastily wiping their eyes. They were not merely one-trick-ponies, however. Each of them showed great individual range, with Cara eliciting her own laughs at times and Miranda able to effortlessly display emotional poignancy.

Mei Lian Hoe and Jiayi Chong, co-directors of the production, must be commended for their directorial decisions. The show has many solo songs, and the duets often didn’t require much direct interaction, but the directors did not fall into the temptation of over-complicating the staging, and instead allowed the music and acting to speak for themselves, which resulted in a simple yet powerful performance from all. Furthermore, little moments of physicality provided some of the biggest laughs and is a testament to their keen grasp of humour.

The singing was fantastic throughout. Very quickly the singers set the audience at ease with their vocal and performative confidence, and praise must go to musical director Natalie Pound and assistant musical director Simon Whitaker for coaching such dynamic performances. Particular note must go to Daniel Rooney, playing Jason, who carried many of the solos smoothly and confidently and whose voice was well matched with Cara’s. Though the chemistry between the performers was a little inconsistent in the two pairs, and perhaps more could have been done to maintain the connection between the characters, this is a minor fault when there was a predominantly strong rapport between all performers.

A wonderful atmosphere was created in that little theatre this evening. Run without an interval, the performers, including the indomitable Natalie Pound on keys, showed great stamina without dropping the emotion for a second. As mentioned before, by the end there wasn’t a dry eye — and the audience was buzzing with all the humour, pain and absurdity of New York life.