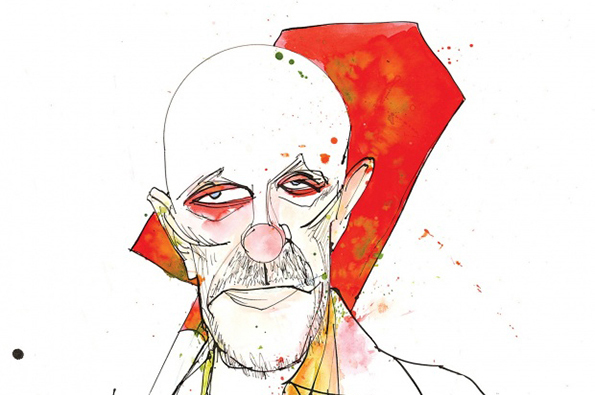 London sometimes throws you curveballs, and more often than not they leave you pleasantly surprised and marvelling at how inventive and quirky the city can be. I had such an experience last week when I passed by the 71a gallery space in Shoreditch which, according to the ink scrawled poster outside, was hosting an opening night for a new ‘Breaking Bad’ exhibition. I was already lost and late to meet a friend but my curiosity (and the fact that I had recently binged through five series in just two weeks) quickly got the better of me. 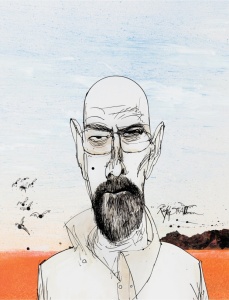 Unsure of what to expect, I descended downstairs into the gallery basement, my interest piqued by the familiar yellow jump suits and gas masks dangling from the walls, as well as a bar covered in bubbling flasks and boiling tubes. The gallery space was hung with bizarre ink portraits of the main characters from the series. Everyone seems to love Breaking Bad, including, as it turns out, the cartoonist Ralph Steadman, best known for his illustrations of Hunter S. Thompson’s work. Having been approached by Breaking Bad’s producer Vince Gilligan to illustrate a limited edition box set of the series, Steadman jumped at the challenge.

The use of inks for the portraits was effective, capturing the intense nature of Breaking Bad– as anyone who watches it knows, there is something uncontrolled and uncontainable about the show. Those familiar with the unfortunate demise of Gus Frink will appreciate the explosive use of red ink across his face. The more controlled lines in Walter’s portraits contrasted with those in Jesse Pinkman’s, who seems to be falling apart in his portrait. In this way the pictures are both visually impactful and psychological as the characters’ emotions seem to be channelled through the ink lines. Steadman notes, “At first, I thought this series is going to be all about death and desecration, but instead it became a more complex landscape of human relationships.” His portraits reflect the delicate balance between brutal violence and psychological complexity for which Breaking Bad is renowned. Vince Gilligan clearly feels the same way, dubbing Steadman “the Walter White of artists: He’s a dark genius whose output is disturbing, yet habit-forming. I am thrilled by his arrestingly bleak, visceral imaginings of our Breaking Bad characters.”

The gallery also included some inventive interpretations from other artists selected by Steadman to accompany his work. I was surprised to find that these were as impressive as his work and looked at certain episodes from different angles. A pencil drawing by Shane Dowling of Gus Frink’s mutilated face was particularly impressive, as was his take of the episode in which Walt tries to poison Tuco – reimagined from the perspective inside Tuco’s mouth, looking out across the poisoned burrito at Jessie and Walt.