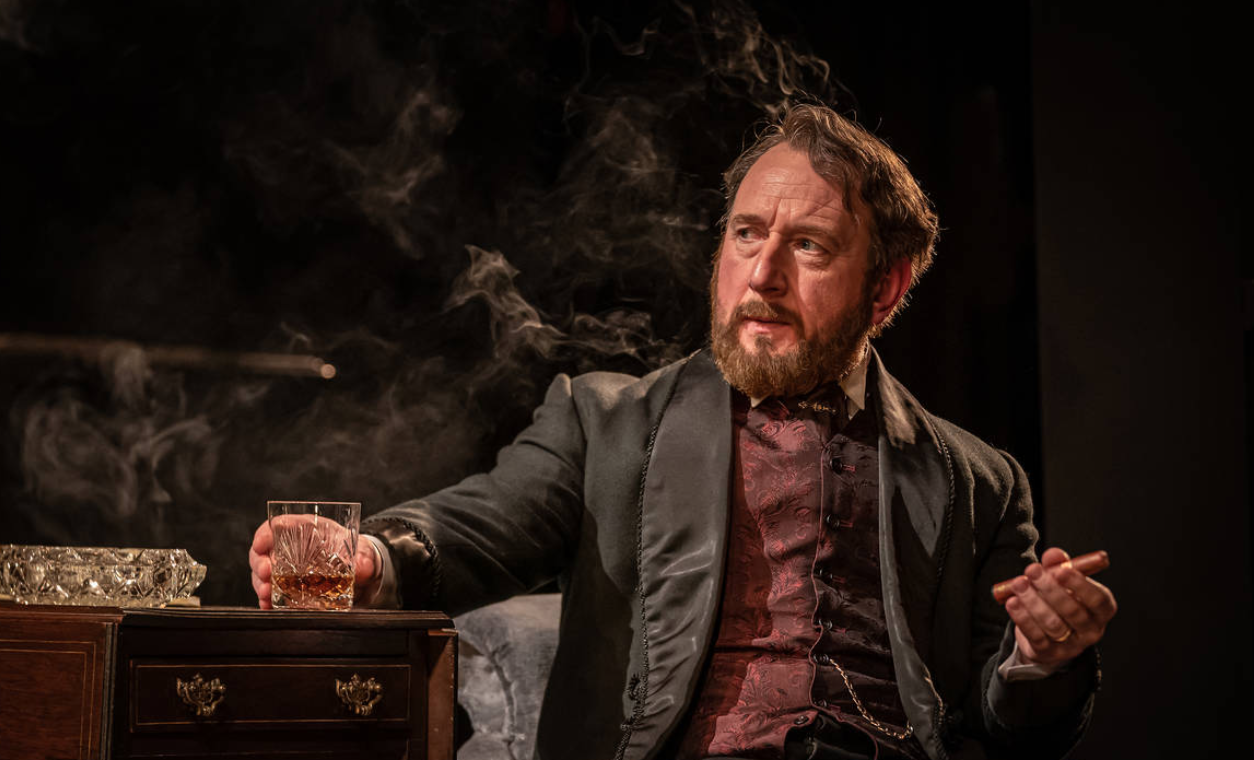 The curtain rises, and one can hear a barely audible intake of breath from the audience. Richard Hudson’s set teems with opulence and sprawls out in front of us, as a large host of characters, young and old, almost chaotically inhabit the space. Stoppard’s final play (as he himself has proclaimed) could not have found a grander way to open, and it sets the stage for the weight and majesty of the epic we are about to experience.

Spanning six decades, from 1899 to after the Holocaust, Stoppard leads us in linear sequence through the lives of several generations of the Merz family, Austro-Hungarian Jews living in Vienna. Whilst the huge cast (some 41 members) means that not all the characters are drawn out fully, by the end of the play, this lack of character development becomes a powerful, devastating symbol, as barely any of them make it through the Second World War. The rich, luxurious set of the first act is reduced to a barren, dilapidated space, bereft of both material objects and the family members that once inhabited it. The one jarring constant: a grand piano. This sits centre stage and casts a subtle, metaphorical aura which reminds us of what has been lost. And indeed, not being able to remember certain characters’ names by the end of the play as their fates are revealed (Auschwitz, Auschwitz, Dachau, Auschwitz…) is not just a way of making us feel guilty; it is a comment on remembrance, a theme which is expanded upon throughout the play.

Through these many characters, Stoppard explores his own Jewish heritage for the first time. He asks pertinent and vital questions about memory and identity and dives into discussions on whether assimilation is totally possible for ‘outsiders’ in society. One of the characters who is developed more fully than the others is Hermann, played beautifully by Adrian Scarborough. Scarborough deftly captures simultaneously his confidence in integration and his deep shame and insecurity. For Hermann, assimilation is ‘enlightenment’. Hermann has married a Catholic woman, renounced Judaism, and is determined to become a member of the elitist Jockey club. He argues passionately that he is now an ‘Austrian of Jewish descent’. Watching his desperate attempts to advance in society and escape his identity, one is gripped with sadness, as he is only able to achieve the latter by renouncing his ancestors and everything they believed in.

Hermann and the other male characters explicitly discuss intellectual topics and deliberate what it means to be Jewish, drawing upon mathematics and philosophy. But what I found remarkable is that Stoppard does not side-line his female characters; whilst it is true that within much of the play they are relegated to the typically ‘feminine’ sphere of gossip, love, and family, they often impart ideas about memory on an implicit and subconscious level. In one early scene, several women are looking through an old photo album whilst the men sit on the other side smoking cigars. Grandma Emilia Merz (Caroline Gruber) realises with a jolt that she cannot name all the people in the photos anymore, and melancholy replaces the joyful reminiscing as she remarks that one can die a ‘second death’ when your own family can no longer remember you. Importance is placed on remembrance, and with hindsight, we are reminded to remember the Holocaust, and not submit to historical amnesia.

The importance of memory is carried through until the final scene when we are reunited with an adult Leopold (Luke Thallon), a character we last saw as a boy. He is bombarded with variations of “don’t you remember, can’t you remember?” as he refuses to acknowledge his Jewish heritage, even though it is right in front of him. When remembrance finally hits him, it is earth-shattering. Standing in the exact same room that the play opened with, Leopold and two others are the only remaining survivors of the Merz family. The play is in a constant state of circularity because every scene is set in a room which reminds us of its beginning (the piano, paintings, family members who have aged before our eyes). It is almost like we are simultaneously living the past and present. A devastating feeling of nostalgia hits the audience, a feeling perpetuated by having followed this family from the beginning and seeing the older members fade into myth and legend, reduced to allegories and stories. It reminded me of Gabriel Garciá Márquez’ novel, One Hundred Years of Solitude, with one crucial difference. Where Márquez’ novel is ensconced in magical realism and the fantastic, Leopoldstadt is brutally realistic and represents lived experience. Extraordinarily personal to Stoppard and yet driven by a communal plot and shared trauma, Leopoldstadt is a powerful commentary on identity, race, and culture, providing an all too important reminder that the horrific events of human history cannot be allowed to happen again. Indeed, the only way in which we can assure this is through remembrance.