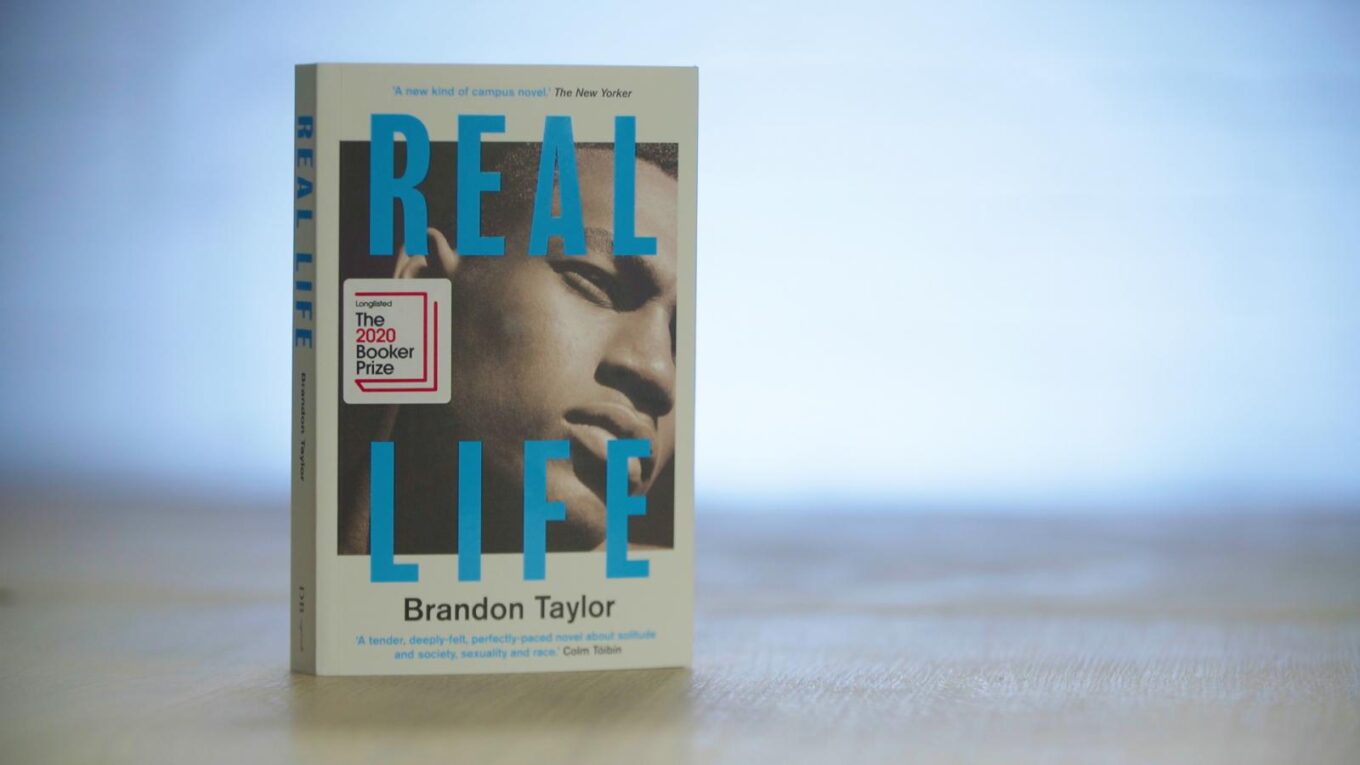 ALEX HEWITT considers the relationship between masculinity, blackness, and queer identity in Brandon Taylor’s Real Life, which is shortlisted for the 2020 Booker prize.

Real Life, Brandon Taylor’s debut novel, is ridiculously good; the kind of good that makes you want to tell everybody else to shut their laptops and go home because they’ll never be able to write prose this outstanding. Conveying all the discomfort of a faded bruise, Taylor writes with a clarity that renders everything slightly off-centre. There is a flickering, exhausted satire in the novel’s depiction of the reality of being the only black person in an overwhelmingly white space, and many of the novel’s sequences, even the most quotidian, are both icy and sweating with tension. I felt my palms growing clammy and my throat tighten during the innocuous tennis matches and uneventful lab sessions that constitute the novel’s plot and, during one particularly agonisingly narrated dinner party, I had to stop reading and stare slack-jawed at the wall.

A tight, breathless campus novel that takes place over a single summer weekend in an unnamed, Midwestern college town, Real Life superbly depicts the drifting loneliness and bewildering isolation of life within academia’s cloistered corridors. The novel centres on Wallace, a black, gay, postgraduate biochemist raised in the South who is an amalgamation of Taylor’s own experiences and those of other queer, black people on college campuses and who, to put it lightly, is not having the best time. His estranged, negligent father has recently died, racist classmates are tampering with his lab work, his friends are failing him, his disordered eating is worsening, he’s making himself vomit after sex, and the sight of an attractive man elicits a two page monologue on body shame that describes other people’s beauty as “a kind of unrelenting cruelty”. So, you know, cheery stuff.

But where you might expect a melodramatic, weighty sadness, Wallace mostly exists in a mode of detached, ambivalent numbness; a mode that has come to characterise so much contemporary fiction and one that Real Life depicts brilliantly. Much like the protagonists of Sally Rooney’s bristlingly alienated novels or Ottessa Moshfegh’s darkly funny tales of late capitalist woe, Wallace is always just at the edge of his own feelings, observing and anatomising them as though they have as little to do with him as the nematodes he’s tasked with dissecting.

“He didn’t know what to feel,” Wallace states near the beginning of the novel, “and so he tried not to feel anything. It seemed more honest that way. A real feeling.” This affectless uncertainty, the kind that can occupy the place of emotion until it feels like a feeling, until you forget something else used to stand where it stood, follows Wallace everywhere. Yet as bewildering as this anaesthetised absence can be for Wallace, it is perfectly rendered by the novel’s close, third person narration and by the thrashing, blank flatness of Taylor’s prose, which seems to bury Wallace’s pain even as it articulates it.

The novel’s expertly crafted mutedness is, however, more than just devastating; it also feels incredibly pointed. “You think that, if I hurt you sufficiently, you will feel sufficient guilt to get you through this,” Wallace snaps at a friend at one point, “but I don’t owe that to you…I don’t owe you any more pain than I’ve already dealt you.” Real Life echoes this careful balancing act and, by keeping its readers always stranded at arm’s length, sidesteps the melodramatic, showy conventions through which black and queer people are often expected to express their hurt in search of something more truthful.

Despite this, it can be hard, at times, to read a book that is so profoundly miserable, particularly when so many recent books that centre on gay men are similarly depressing. Yet, as in the work of Garth Greenwell, Alexander Chee, and Saeed Jones, there is also a measure of comfort in that hardness. The contemporary, corporatised politics of gay pride can be just as isolating and domineering as the homophobic rhetorics of shame they were constructed in opposition to and the exploration of this double bind in fiction can be liberating. In this way, Real Life is both consoling and honest in its depiction of the hard, difficult feelings that gay men are so often compelled to disavow in the name of pride and progress; something that the novel shows is only more true for black gay men, who are doubly alienated by a queer community that remains comfortably blind to its own racism.

Still, within Wallace’s fog of loneliness, neurosis, and sadness, Taylor leaves some room to breathe. One of the driving forces of Real Life is Wallace’s indecision as to whether he should quit his PhD programme. “He was unhappy,” Wallace admits, “and for the first time in his life, that unhappiness did not seem entirely necessary.” Even if it remains just short of an epiphany and inchoate in the rootless way desire can be, this questioning, restless want for something more, for something else, starts to feel just as real as the absent, non-feelings Wallace understands as his reality. And although Real Life remains open-ended, there is a sense of easing in the novel’s last chapter, where Taylor fiddles with tense in a way that feels truly luminous.

All of this is to say that you should all read it immediately and that, if it doesn’t win the Booker, “robbed” won’t even begin to cover it.